Feature: The importance of aerodynamics in commercial vehicles

As pressures increase on drivers, fleet managers and vehicle manufacturers to reduce the environmental impact of commercial vehicle operation, more focus is being put on the minutiae of running a fleet and designing vehicles.

Better, more efficient engines are just one colour in a broad palette of solutions being applied to CVs. Across the industry – and the wider automotive landscape – attention is being paid to the finer details that, when combined, can make a big difference to efficiency.

But the question of aerodynamics, for many years, was left largely unanswered. Commercial vehicles are designed to maximise haulage capability, which results in square, blunt machines at odds with aerodynamic shapeliness. But in the age of marginal gains, aerodynamics is becoming a popular buzzword.

“Aerodynamics has a major impact on fuel consumption and thus on operating costs,” says Dr Nicolas Weigel of Mercedes-Benz Vans. “This is particularly relevant for cross country and highway operations, where savings can achieve up to several litres per 100 km.”

“It can have a massive effect,” agrees Bob Morris from Isuzu Truck. “A vehicle needs power to push through the air, and power is fuel and costs you money. If you can reduce the drag factor on the vehicle, you improve the efficiency.”

At Daimler, aerodynamics has been on the agenda for years, but for a long time the approach was simply to optimise a basic body design. Today, keeping things streamlined is a fundamental task. “We now integrate almost every exterior component and even air flow through the vehicle in aerodynamic development,” Dr Weigel says. 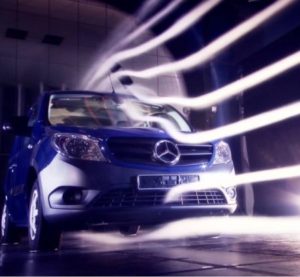 The aerodynamic focus reflects, in many ways, what has been happening in the car world. But although technology and understanding is often shared, especially among larger manufacturers that build both types of vehicle, the execution can be very different.

“Nowadays, there is a very close exchange about aerodynamics among Daimler’s divisions,” says Dr Weigel. “Many CV aerodynamic features have been derived from passenger car achievements.”

At Volvo however, there is less knowledge transfer between truck and car departments.

“There isn’t much, and I don’t see that there need to be much exchange and influence between the two either,” says Linux Hjelm of Volvo Trucks. “Even though both are road vehicles and might, in some aspects, seem quite similar there are, aerodynamically, some substantial differences. Cars are designed for much higher speeds and are much lighter, they therefore have completely different road handling demands than a truck.”

Hjelm highlights the need for downforce on a car’s axles, which isn’t needed on relatively low speed, heavyweight commercial vehicles. “The customer demands are very uniform when it comes to fuel consumption; they want it as low as possible, so for trucks we more or less only design a truck for low air drag and nothing else,” he explains.

In addition, CVs still have to focus primarily on practicality, which limits aerodynamic potential. “We expect that aerodynamics will have an increasing impact on visual style in the future, particularly for CVs” Dr Weigel says. “Usability will, however, be a limiting factor for a radical aerodynamic shape.”

Volvo’s Hjelm says that for larger CVs, this clash is particularly notable in trailer design. “The main and most difficult challenge is how to combine an aerodynamic shape with the practical needs, and the often rough conditions/treatments trailers are subjected to,” he says. “I believe there is no transport company that will drive around with a trailer that is difficult, unpractical or time consuming to load or off-load, for example, no matter how efficient it is in reducing the drag.”

Bob Morris of Isuzu says the varying configurations of smaller commercial vehicles also present a particular problem for aerodynamicists. “Cars are produced on a production line and are largely the same, but trucks are a little bit different,” he says. “A manufacturer produces a chassis cab which then goes to a body build, and the body on the back of the vehicle will have a massive effect on how the vehicle performs depending on its size, shape, weight and so on. It’ll be completely different from a box van to a flat bed to a curtain-sider to a cherry picker.”

To improve aerodynamics further in the future, cooperation between industry stakeholders would seem to be key. “The trend in aerodynamics is definitely going in the direction of including the whole vehicle, tractor plus trailer, in the aerodynamic design,” says Linux Hjelm. “In the past, truck manufacturers only worked on the cab itself, then roof air deflectors were introduced, followed by cab side deflectors and chassis skirts. The cab shape was also worked on. But there is a limit on how much you can achieve by only working on just the cab.”

“We of course have the situation that we have separate companies developing truck and trailers, and in my opinion, there could be a lot more collaborations and communications between the two groups.”

Mercedes-Benz Vans’ Dr Wiegel sees a gradual improvement of current techniques, rather than giant leaps forward. “As we have placed a continuous focus on van aerodynamics for more than 20 years, the future development of aerodynamic performance is rather an evolutionary than a revolutionary process,” he says.

However, movable or active aerodynamic devices, as seen on the latest generation of sports cars, are also likely to make their way to the commercial sector. “In the same way as in passenger cars, we expect that active elements will be a major player in the aerodynamics of future vehicles,” says Dr Wiegel.

Volvo’s Hjelm points to EU discussions about future regulation for trucks, which could include the use of sleek, recessed cameras in place of drag-happy side mirrors.

For Isuzu’s Morris, advances in technology have to be accompanied by an industry education program for end users. While most large fleets understand the savings to be made by investing in aerodynamic technology, smaller businesses and single customers are often put off by upfront costs.

“We’ve sold vehicles where customers don’t want to pay for the air deflector on top because it’s an extra cost,” he says. “It’ll save them money, but they’re looking at the “now” bill rather than the longer bill.”

“I think a learning programme does need to come out to make people more understanding of aerodynamics. It’s something that is vitally important.”