An all-new electric hybrid double decker bus has made its debut at the Euro Bus Expo at the NEC, Birmingham. 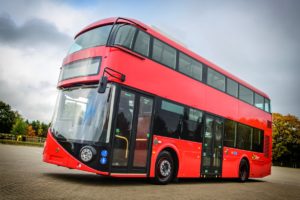 It gets a more powerful electric motor, increased capacity Lithium-Ion battery rated at 19kWh and an opportunity charging set-up that allows it to be boosted at terminuses and bus stops.

The bus has the ability to operate with zero tail pipe emissions in electric mode for around seven kilometres, or 4.5 miles, between charges. Once outside city centre zero emissions zones, the Euro 6 diesel engine takes over, giving greater flexibility and operating range. Regenerative braking recovers energy from the drivetrain and is used to recharge the battery.

The opportunity charging system is fully automated and takes between three and six minutes, using the same charging system as Volvo’s full-electric buses and uses a pantograph, which makes physical contact with the bus from above. This allows the bus to charge safely while passengers embark and alight.

The B5LHC is the latest model in Volvo’s Electromobility range, which includes Hybrid, Electric Hybrid and Full Electric vehicles along with connected services and maintenance packages tailored to urban transport systems.

The launch vehicle – which has been built to Transport for London (TfL) specification – is scheduled for evaluation in London during 2017. Certified with a passenger capacity of 87, it has 43 seats on the top deck and 17 seats in the lower saloon, built to a two-door specification.