New fleet of electric buses goes into service in Nottingham 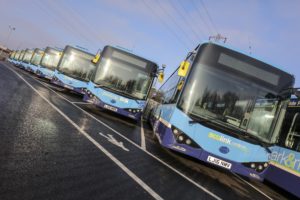 The 12-metre long eBuses and associated charging equipment will go into immediate service across the city, which is a leader in low emission transport as one of the UK’s Go Ultra Low leaders.

The bus purchase has been facilitated by a £1.4m grant from the Department for Transport Green Bus Fund. The remaining funds of £2.1m have been raised via the Nottingham City Council Workplace Parking Levy. The council is working in partnership across Greater Nottingham to encourage all modes of transport – buses, taxis, trams, bikes and cars – to move onto a sustainable electric platform, with more power generated locally via waste incineration and solar panels.

In the multi-million pound purchase contract, BYD is providing a five-year warranty on its proven power train components based on its Iron-Phosphate battery technology. BYD is the biggest producer of pure electric buses in the world and the 12-metre eBus has been trialled in more than 50 major European cities. The Nottingham order is BYD’s first UK fleet to go into service outside of London.

The buses for Nottingham City Council have a comprehensive service support package which includes training for drivers and maintenance engineers.

Councillor Nick McDonald Portfolio Holder for Business, Growth and Transport at Nottingham City Council, said, “Nottingham is proud to be named a designated Go Ultra Low City plus it is one of five UK cities with a commitment to introduce a Clean Air Zone with Euro 6 emission entry standards for buses by 2020. It hasn’t been easy being an early adopter of such cutting-edge technology, but the partnership has now achieved a reliable electric bus network. It is hoped that other bus operators and contractors within Nottingham will make use of this charging network and local expertise”.