Feature: How the National Register of LGV Instructors will change the face of training

The Driver and Vehicle Standards Agency (DVSA) wound down its LGV instructors’ register on 31 December, and as of 1 January 2017, taking its place is the National Register of LGV Instructors (NRI). Industry training specialist, the Road Transport Industry Training Board (RTITB), will operate the NRI, but only now it, too, has closed its existing LGV instructor register.

Two registers for one type of driving instructor, both of which are closing at the same time, sounds confusing; for anyone having trouble keeping up (especially with the acronyms), Steve Ellis, the Road Haulage Association’s (RHA) Policy Advisor on Training, explains the change in a nutshell.

“The National Register of LGV Instructors will become the new register, following the DVSA’s imminent closure of its existing register at the end of 2016,” he said. “There are currently two registers operating: the DVSA’s and one run by RTITB (which predates the DVSA’s). RTITB has agreed to close its current register and take the opportunity to operate a single register for the road transport sector.”

Having a single register is no bad thing, but there’s more to the move than simplicity, according to Richard Brewer, Manager of the NRI. “Following the DVSA’s review of their operations, they thought it was important to enable [a new] register to go forward. They asked for proposals, we put one forward, and the DVSA liked what they saw. By merging the two current registers, the idea was to bring benefits to professional LGV instructors, and update it with industry backing.”

That industry backing comprises the RHA and the Freight Transport Association (FTA), both of which have thrown their weight behind the new scheme, while a number of hauliers and training firms are also on board. Crucially, the NRI will be operated on a not-for-profit basis, something Ellis claims is fundamental to the RHA’s support.

“[We] are pleased to support this venture on the understanding that the ‘not for profit’ structure remains and that the objectives are achieved, as we believe this offers an opportunity for standards of vocational licence training to be improved.”

The move will see the DVSA take more of a back seat in the practice of training HGV instructors; the government organisation has run its own register on a voluntary basis, but relinquishing control will free it up to concentrate on driving tests, which it is obliged to provide. As of January, the DVSA claims it will pour more effort into reducing wait times for lorry, coach and bus tests.

The government body hasn’t completely washed its hands of the register, though. It will remain in charge of examinations for LGV instructors and continue to monitor the register, as Mark Winn, Head of Vocational Policy, explain, “The DVSA will be a part of the governance committee overseeing the delivery and development of the register and associated examination. We’ll continue to set standards for driver training through our role on the committee, and by maintaining the national standard for driving lorries.”

In addition to the DVSA, the governance committee includes the RHA, the FTA, a number of hauliers and commercial HGV training specialists, which will collectively “oversee various elements, keep tabs on developments and generally review the progress of the register,” according to Brewer.

Though the register will be run by the RTITB, the NRI will operate as “a completely separate entity” to its parent organisation and be subject to regular audits from the governance committee. It also claims that the NRI’s information will be “held and managed on a totally independent database.”

HGV instructors on either of the outgoing registers have been offered a free transfer to the NRI, and the nature of testing is also set to change. “There are four parts now,” says Brewer, “there’s a theory element, a personal driving ability element, an in-cab element and we now have an in-class element as well. The original DSA register didn’t include that in-class element, and since then, with driver CPC coming in, the role of the LGV instructor has widened – and this [new addition to the test] covers that requirement. 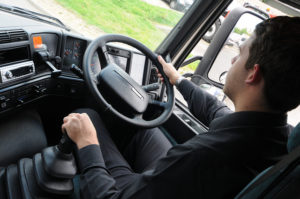 “The in-class element [is significantly different from previous tests] and there’s been a review and revamp of the in-cab as well. We look at that from three separate scenarios: a novice candidate, remedial training and also where [the instructor] has to deal with an individual who has come back to training following a test failure.”

The tweaks to the test and the structure of the register are all in the name of bumping up standards, increasing the pass rate and generally getting more instructors through the test, according to the RHA’s Ellis, “The objectives include maintaining standards for the required skills and knowledge of LGV instructors, improving the standard of LGV instruction available and increasing the number of registered instructors. This should contribute to an improvement in national pass rates for LGV vocational tests. Future plans include to publish test pass rates for candidates trained by NRI registered instructors, [which will be] an industry first.”

As for drivers, Brewer claims they can expect better standards, a more professional approach from instructors and better overall training. “The register will improve the standards of LGV driver training, while providing an opportunity to further expand the register and professionalise the LGV training industry as a whole. We want to help drivers recognise the professionalism entrenched within the sector.”

He also hopes that the introduction of the register and a subsequent increase in standards will help to improve the perception of the industry.

“When we look at the general public’s thoughts about the persona of our industry, they’re not always the best. If we can help to promote professionalism, and to reinforce that message, through the register, to those people who take examinations, then I’d like to think that over time, we could be part of the solution to changing the general public’s image of the industry.”