A development that should significantly reduce congestion around the notorious Dartford Crossing on the M25 looks set to forge ahead, after the planned route was revealed last week.

The new Lower Thames Crossing, which will take the form of a road tunnel beneath the Thames Estuary to connect Kent and Essex, has been welcomed by hauliers, with up to 4.5 million HGVs expected to use the new route when it opens in 2027. 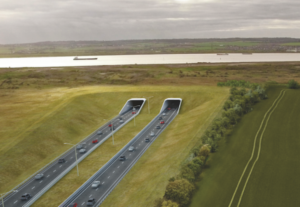 “The new crossing will have a tremendously positive economic benefit,” said RHA Chief Executive Richard Burnett. “The project itself will provide thousands of jobs and will give a real boost to business across the South East.

“The new route will reduce journey times, especially for those heading towards or away from the all-important Channel ports. The congestion on the Dartford Crossing will also be reduced and the potential savings for operators in terms of time, money and fuel will be considerable.”

The £6 billion project will link the M25, near North Ockendon, Essex, with the A2 near Shorne, Kent.

Transport Secretary, Chris Grayling, claimed it would create more than 6,000 jobs and boost the economy by more than £8 billion.

He said, “We are making the big decisions for Britain. The new Lower Thames Crossing, and other improvements in and around Dartford and Thurrock, will further strengthen our economy while also creating thousands of jobs.”

“Our £23 billion investment into our roads is already making a difference, with schemes being completed across the country, including the M1 Catthorpe junction and A556 at Knutsford.”

A public consultation about the crossing started in January last year, with the final route chosen after 47,000 people responded.

Mr Grayling also promised £10 million to help tackle traffic jams around the existing Dartford crossing, some of which will go towards refurbishing the tunnels.