Fire chiefs in Suffolk have come up with an ingenious way to deal with incidents in difficult-to-access locations by commissioning three all-terrain Mercedes-Benz Unimogs fully kitted out as fire tenders.

Suffolk Fire and Rescue Service’s 14.0-tonne Unimog U423s are based in Ipswich, Bury St Edmunds, and Lowestoft. They will be used to undertake large animal rescues and fight fires on heaths and scrubland. 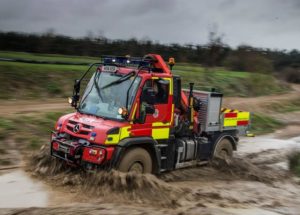 Supplied by Arthur Ibbett, of St Neots, Cambridgeshire, a Unimog Dealer since 1971, the new 4×4 chassis are powered by advanced 231bhp Euro 6 engines and are fitted with dropside bodies developed by specialist convertor John Dennis Coachbuilders of Guildford, Surrey.

The cranes are used primarily to rescue horses and other large animals that have become trapped in water or other hazards, with equipment such as strops, harnesses and skid boards, all of which is carried in a dedicated locker.

They also lift mission-specific demountable ‘pods’ on and off the vehicles. One, a ‘rescue pod’, contains an inventory for use by Suffolk’s swift water rescue teams – as an extension to the Unimog’s role, the new vehicles also tow rigid inflatable boats (RIBs). A second pod is a 1,500-litre water tank with pump and hose reel.

Removal of the pods means the deck can be used to transport vital equipment which can be used, for example, when responding to train or aircraft crashes that may occur at inaccessible locations.

“The Unimog is a highly cost-effective piece of equipment,” said Neil Elmy, Fleet & Equipment Manager for Suffolk Fire and Rescue. “An unrivalled combination of all-terrain performance, agility and adaptability makes it the perfect platform for a variety of applications and means that in our case it does the job of several different vehicles rolled into one.”

There are two core variants: an implement carrier – as chosen by Suffolk Fire and Rescue – with front, side and rear attachment points, and a base truck for a range of other bodies. All Unimogs have 4×4 chassis with single rear wheels, which follow the track created by the front wheels. Gross weights vary from 7.5 to 16 tonnes and engine outputs from 156bhp to 300bhp.