Earlier this month Traton announced that its MAN, Scania and Volkswagen brands would invest a total of more than one billion euros in e-mobility by 2025. For MAN this is part of an ongoing project to develop eTrucks. In September 2016, MAN first presented the new concept eTruck, a TGS semitrailer tractor with electric drive, at the IAA Show. In 2017 MAN and the Council for Sustainable Logistics (CNL) signed a development partnership. This agreement gave the starting signal for the introduction of MAN eTrucks in medium and heavy distribution transport, with a permissible gross train weight from 18 to 32 tonnes. We talk to Thomas Hemmerich about the project and how he sees the future for electric trucks.

How did this all start?
We were approached by the Council for Sustainable Logistics, an association of haulage operators in Austria, who wanted to talk about CO2 reduction and their desire to act. We immediately decided that it would be a fantastic opportunity for the MAN brand to help shape the future: as market leader in Austria where we also have a production footprint, we viewed it as an obligation to be a part of this project.

What has been the result?
Nine MAN eTrucks have been in operation for one year specialising in urban distribution deliveries within harsh city centre environments. As you can understand Austrian winters are quite tough and everyone involved was curious about what was going to happen. The eTrucks ran like Swiss clocks and there were no major issues at all. 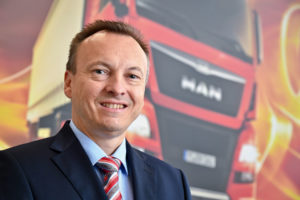 How important are eTrucks to the commercial vehicle landscape and what’s been the reaction from the industry?
There’s been a lot of talk around electric trucks and that has been powered by the European Union. In 2020 there will be certain CO2 limits for vans and in 2025 there will be revised limits for trucks. In order to support this it is crucial, especially in urban areas, to have significantly fewer emissions and significantly less noise. It’s a prerequisite that we need to go down this route. In the next couple of years, for the long-haul business, I personally can’t see an alternative to the highly efficient Euro 6D diesel technology, but we will have to see what the future brings. Most importantly will be the investment in the electric charging infrastructure, which without major political support will undoubtedly slow down customer acceptance. Once this is standardised throughout Europe this will help ease customers’ transition to electro mobility.

What’s the range for these eTrucks?

Between 100-150 miles: it is a spread because some of those trucks have fridge units. If there is no auxiliary power needed we have a range of 150 miles, but with a fridge for example, it’s down to roughly 100 miles. However, the experience after one year has shown that this range for the distribution in urban environments and city centres is perfectly fine.

There is a desire to get longer ranges but the big question surrounds payload and range. This is the crucial question for the long-haul business and how it can get this balance right. Scania launched a prototype trolley truck with an overhead line in order to find answers for long-haul applications but for the next five to 10 years it will be highly efficient diesel for long haul, mainly because of the range issue.

Because both demand and customer interest is high in 2020 we will start a small series production and deliver a second batch of MAN eTrucks to customers.

Will electric trucks look much different from conventionally powered trucks?
In theory, because there is no engine, gearbox or exhaust treatment, you can be much more flexible with the design. Under the current design the batteries are where the engine would be, so the cab is not significantly lower. That may change because there’s not much in the way of mechanical components so in essence you can consider completely different designs where you can get a lower cab for better visibility.

The aim is to maximise the volume of the payload so aesthetics are not so important. At IAA 2018 and the 2019 UK CV Show we showcased a concept vehicle which demonstrated how the future could look, this created a huge amount of interest and has led to many interesting conversations with customers.