The continued adoption of electric and hydrogen technologies has provided the bus and coach sector with good news. As Stagecoach celebrated 50,000 all-electric miles covered by its Cambridge fleet, Transdev began comparison trials using a new Yutong E10 electric bus and Wrightbus announced the creation of 40 new jobs generated by production ramp-up of its hydrogen-fuel-cell double-deckers. 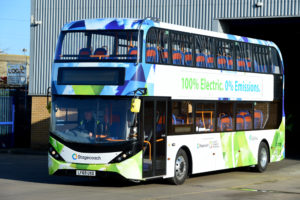 Alexander Dennis (ADL) also announced that design and assembly of its electric bus chassis will move from China to its Larbert, Scotland facility.

Introduced as part of a joint initiative between Stagecoach East and the Greater Cambridge Partnership, Cambridge’s electric fleet has been in operation for 12 months. The two vehicles can travel 160 miles on a single charge and, per mile, use roughly the same amount of electricity as running a conventional oven for an hour: 2kWh.

Newly appointed Stagecoach East managing director, Darren Roe, said, “Over the years, we have worked hard to reduce the environmental impact of our buses and now over a third of our fleet use greener engines. We are committed to buying only ULEB (Ultra low emission buses) which have 30% less well-to-wheel CO2 than the standard Euro 6 bus. This one-year anniversary marks an important milestone in our vision to minimise our carbon footprint and lead the way to a cleaner, eco-friendly future for public transport.”

The Yutong E10 electric bus trialled by Transdev is being loaned by Go North East and is powered by 422kWh batteries that can provide a 230-mile range on a single charge. The bus will run one of the operator’s most popular routes: route 1, linking Harrogate and Knaresborough.

Transdev CEO Alex Hornby, said, “With a bus usually up to every seven minutes, the 1 is a vitally important link between the two towns and an ideal place to put the bus industry’s newest technology to the test. We’re constantly looking to build buses back better as part of our strategy for our company and industry, demonstrating our belief that our buses will continue to play a vitally important role beyond the current pandemic in boosting the economy, both locally in Harrogate and across Yorkshire and the north of England.”