2021 new car registrations grew by a marginal 1.0% on a pandemic-ravaged 2020, as 1.65 million new cars entered the UK market, according to new figures released today by the Society of Motor Manufacturers and Traders (SMMT). The figures underline the ongoing impact of Covid and the semiconductor shortage on the industry, with the market down -28.7% on pre-pandemic 20191, representing the second worst year since 1992.2 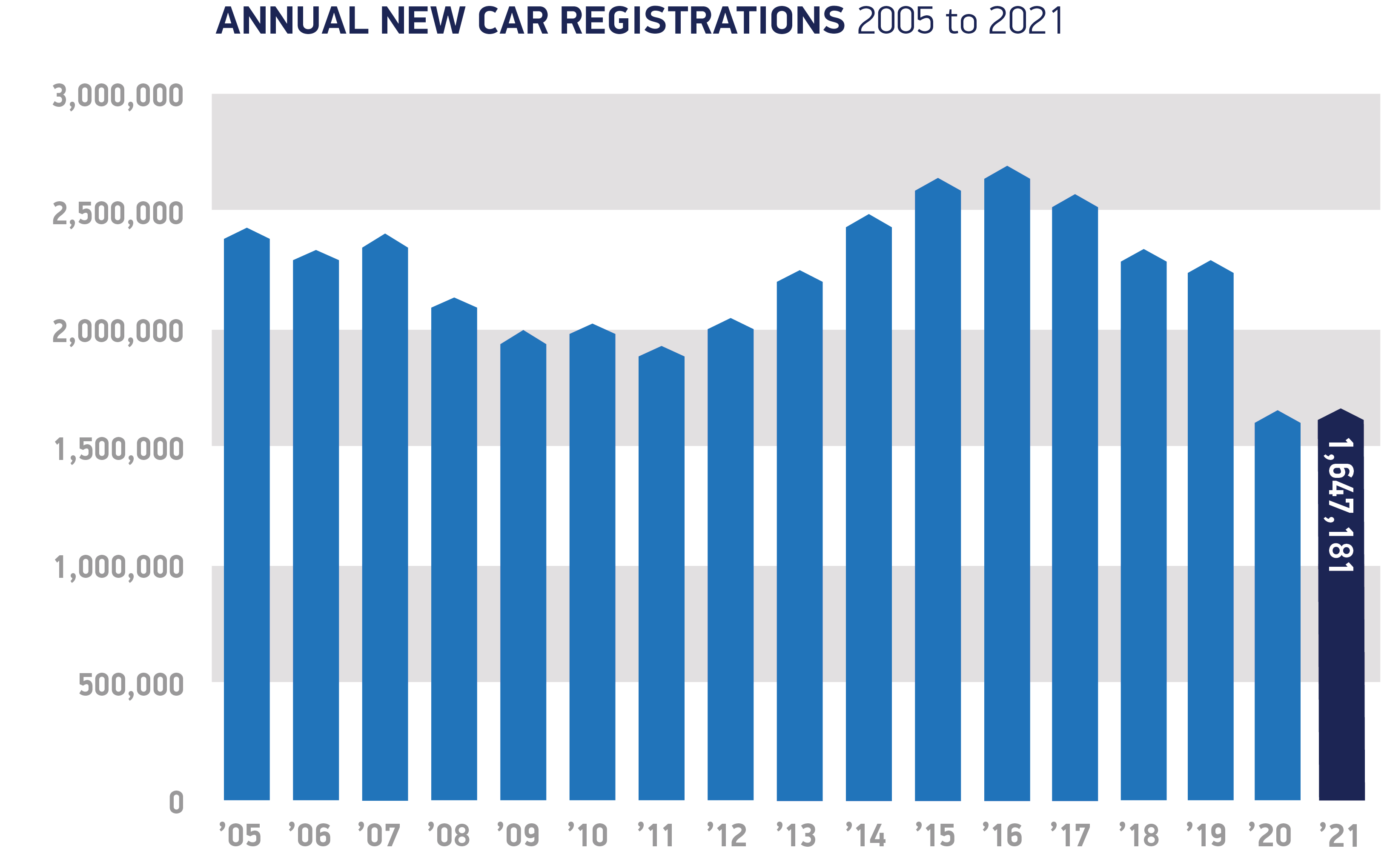 There was some good news, however, with 2021 the most successful year in history for electric vehicle uptake as more new battery electric vehicles (BEVs) were registered than over the previous five years combined.3 190,727 new BEVs joined Britain’s roads, along with 114,554 plug-in hybrids (PHEVs), meaning 18.5% of all new cars registered in 2021 can be plugged in. This is in addition to the 147,246 hybrid electric vehicles (HEVs) registered which took a further 8.9% market share in a bumper year for electrified car registrations, with 27.5% of the total market now electrified in some form. 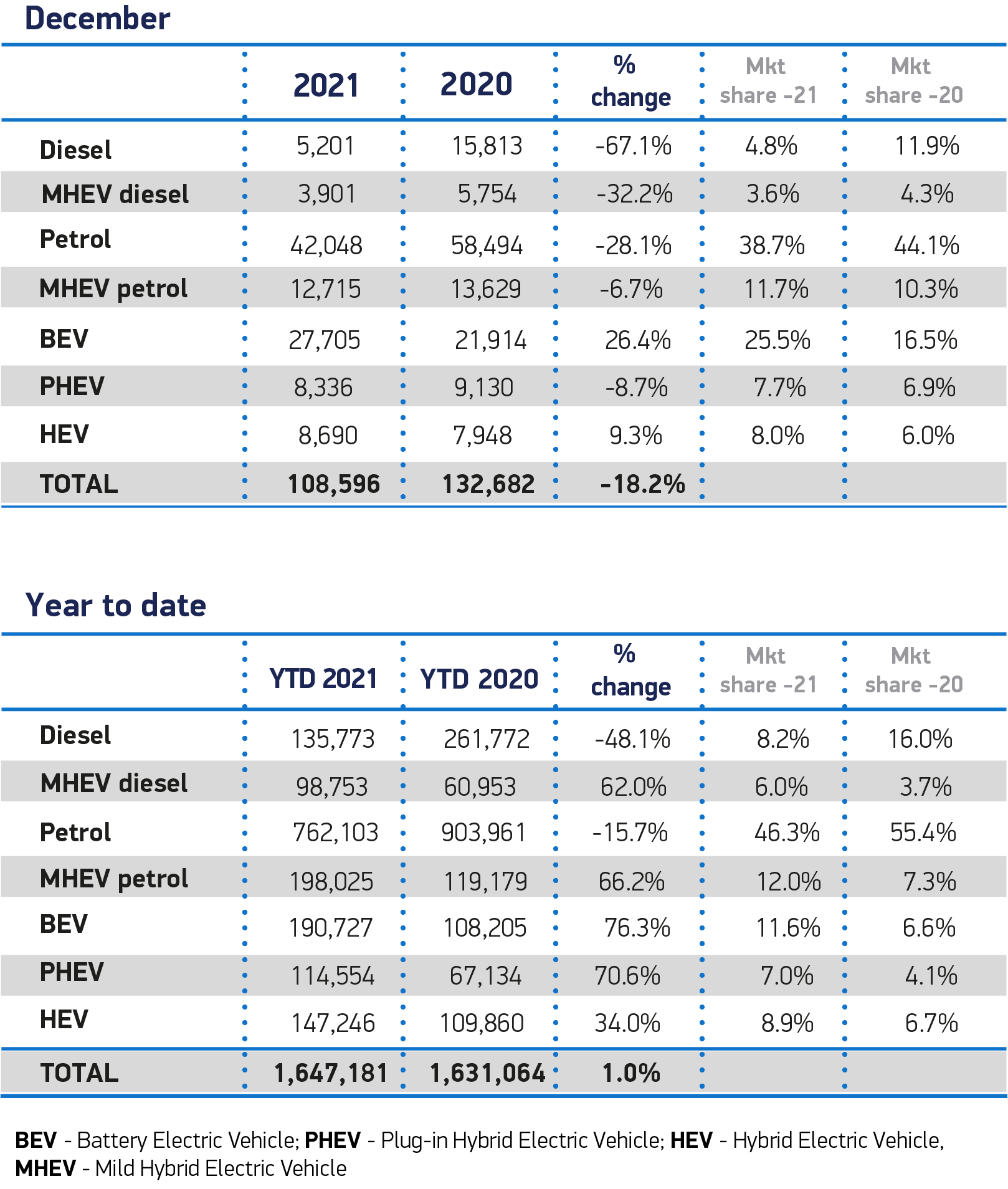 Following billions of pounds of investment into new technology by manufacturers, more than 40% of models are now available as plug-ins. Indeed, the shift in customer preference for these new technologies continues apace, with December seeing BEVs take a record market share in a non-locked down trading month, accounting for 25.5% of all new registrations.

The UK finished 2021 as the third largest European market for new car registrations but the second largest by volume for plug-in vehicles and the second largest for BEVs. It is only in ninth position overall, however, in Europe for BEVs by market share, underlining the progress still to be made, despite the UK having among the most ambitious targets of all major markets with the end of sale of new petrol and diesel cars scheduled for 2030.

Recent announcements, including cuts to both purchase incentives and grants for home chargers, put the achievement of industry’s and government’s net zero ambitions at risk. Furthermore, the slow pace of growth in on-street public charging – where, on average, 16 cars potentially share one standard on-street charger – could put the brake on EV demand and undermine the UK’s attractiveness as a place to sell electric cars.4

Petrol-powered vehicles, including mild hybrids (MHEVs), remain Britain’s most popular powertrain, accounting for 58.3% of all new cars registered in 2021, with diesel-powered cars including MHEVs making up 14.2% of the market, followed by BEVs at 11.6%, HEVs at 8.9% and PHEVs at 7.0%.

Registrations by private buyers increased by a moderate 7.4%, while those by businesses and large fleets fell by -4.4% and -4.7% respectively, in part due to supply shortages. Superminis remained Britain’s most popular cars, with 514,024 registrations, followed by the lower medium (449,631) and dual purpose (443,632) segments. 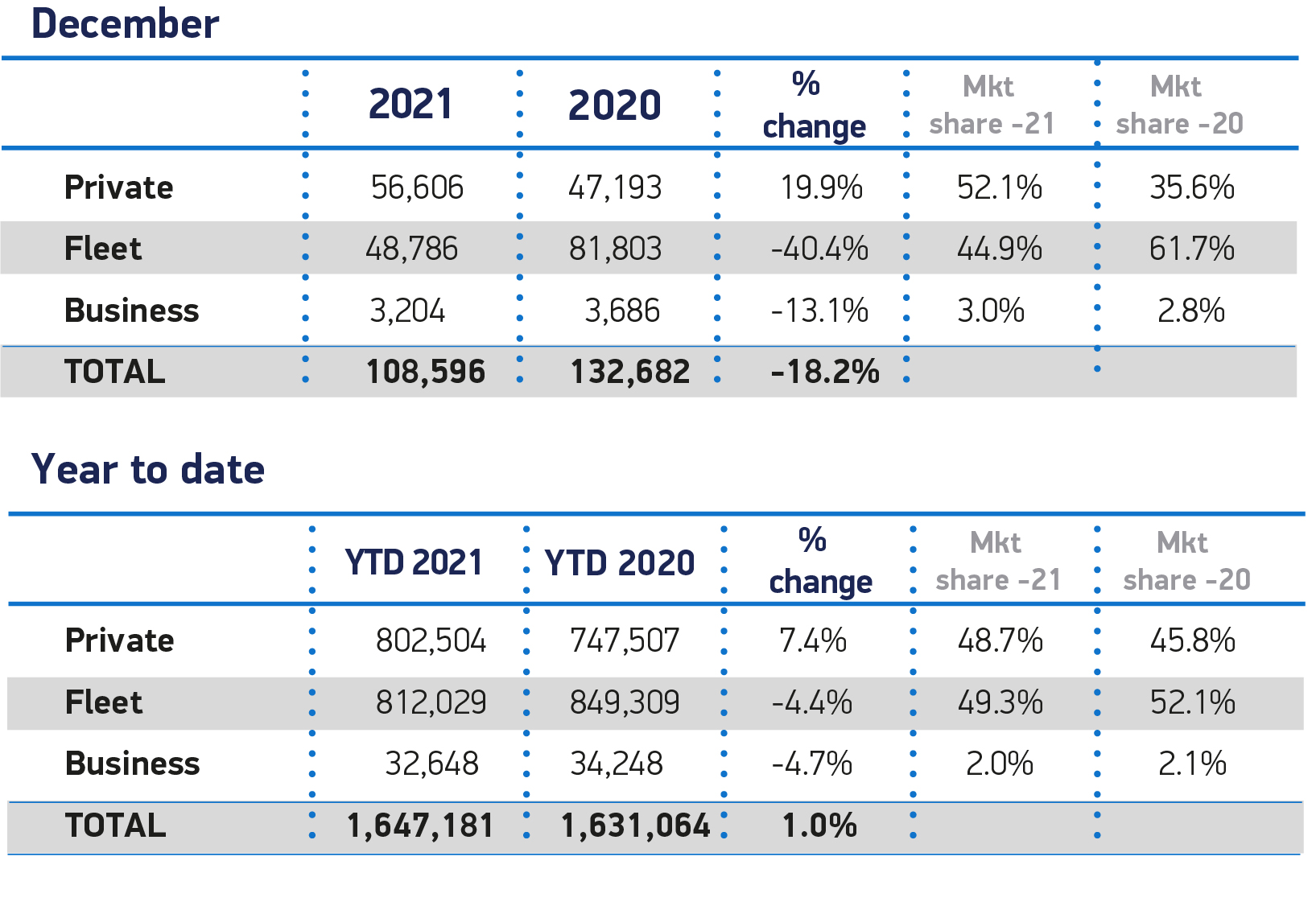 Looking ahead, the latest forecast for 2022 – published in October, before the rise of the Omicron variant – is for 1.96 million new car registrations.

It’s been another desperately disappointing year for the car industry as Covid continues to cast a pall over any recovery. Manufacturers continue to battle myriad challenges, with tougher trading arrangements, accelerating technology shifts and, above all, the global semiconductor shortage which is decimating supply.

Despite the challenges, the undeniable bright spot is the growth in electric car uptake. A record-breaking year for the cleanest, greenest vehicles is testament to the investment made by the industry over the past decade and the inherent attractiveness of the technology. The models are there, with two of every five new car models now able to be plugged in, drivers have the widest choice ever and industry is working hard to overcome Covid-related supply constraints.

The biggest obstacle to our shared net zero ambitions is not product availability, however, but cost and charging infrastructure. Recent cuts to incentives and home charging grants should be reversed and we need to boost the roll out of public on-street charging with mandated targets, providing every driver, wherever they live, with the assurance they can charge where they want and when they want. 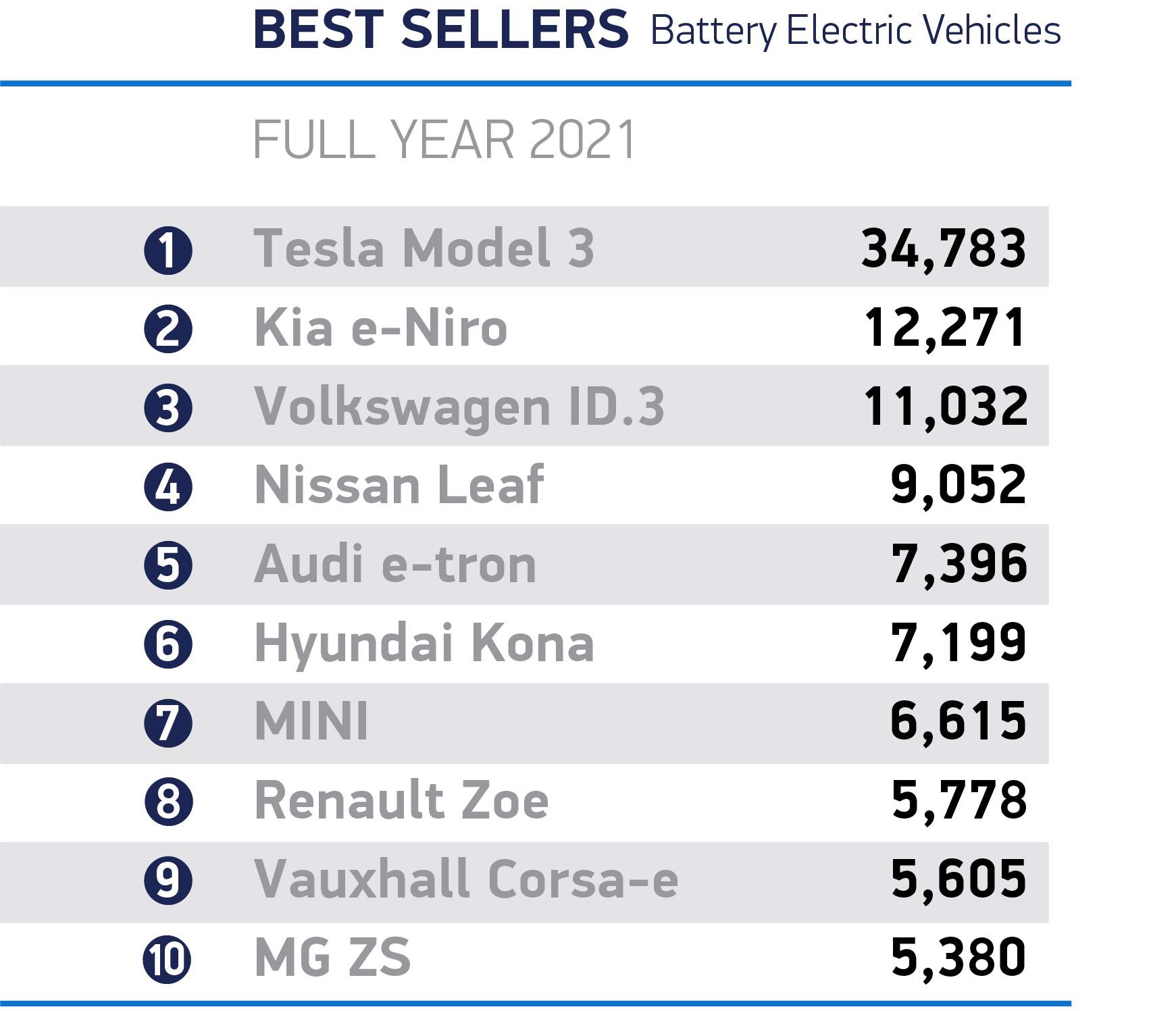 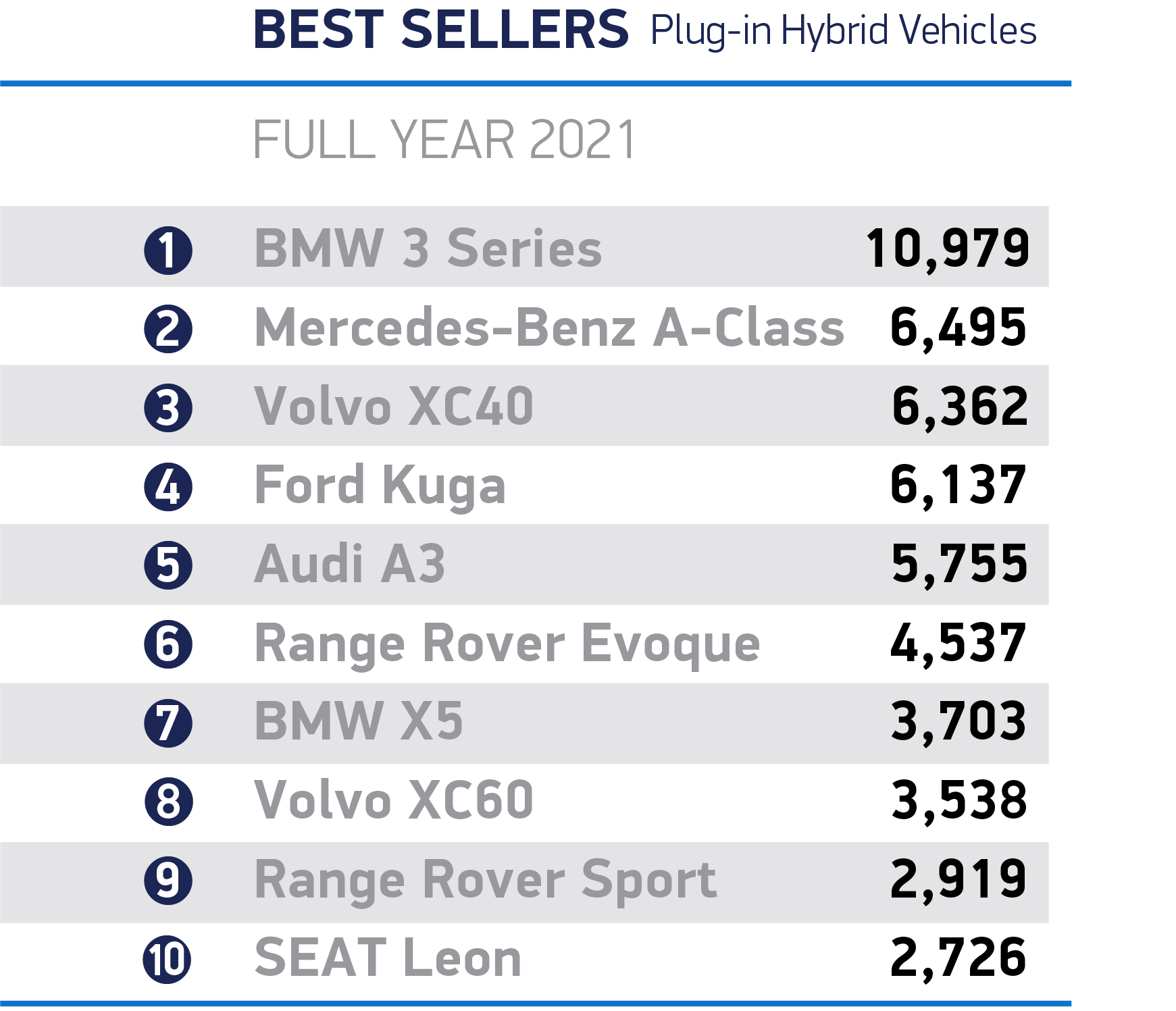