Industry leaders met to discuss issues affecting the UK’s automotive industry in February 1902, and on 22 July 1902, the Society of Motor Manufacturers and Traders (SMMT) was created and exists today as the leading trade body which supports and promotes the interests of the UK automotive industry at home and abroad.

Simms’ vision was that the SMMT would represent a “strong, influential and representative trade organisation, capable of encouraging, developing and protecting the new Industry in this country.” 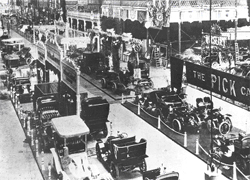 The principal aim of the Society was to exercise control over motor shows and the first SMMT exhibition was held at Crystal Palace in January 1903, then later moved to Olympia where it remained for 32 years.

In 1926 a Statistical Information Department (SID) was established and in 1928 the Society’s first overseas representative was appointed, to be followed by the creation of a Garage Equipment section in 1930. SMMT’s activities abroad continued to expand and in April 1933 an overseas department was created.

The motor exhibitions at Olympia continued to attract large numbers each year, but in 1937 they were moved to the redeveloped Earls Court site. The outbreak of war 14 months later meant the Society’s focus changed dramatically. The cancellation of motor shows severely reduced income. Staff numbers were reduced and space vacated. Committee meetings were reduced to a minimum and the staff gave considerable assistance to government and its ministers. 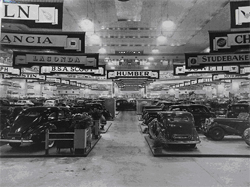 In 1943, the Board of Trade asked SMMT to produce a report on the capacity, employment and capital equipment of the industry, so that the main problems to be faced at the end of the war might be known. Despite the depleted staff and the many pressures the industry faced in time of war, the detailed study was passed to government during 1944.

The lessons of war indicated that there was considerable research work to be done if the industry was to prosper in world markets, and in late 1945 the Motor Industry Research Association was formed.

The Motor Show and Commercial Vehicle Exhibition were re-introduced in October and November 1948. SMMT, the Smithfield Club and the Agricultural Engineers Association concluded an agreement to stage an annual exhibition at Earls Court from 1959. SMMT was very influential, with royalty and senior politicians of the day attending its shows.

During the 1950s, the industry continued its recovery from the immediate post-war period. In early 1956 over 500,000 people were directly employed in motor vehicle and parts production.

In late 1957, having moved from its Portland Street offices to 148 Piccadilly, SMMT was forced to look for new accommodation as its offices were being demolished to make way for a new road. 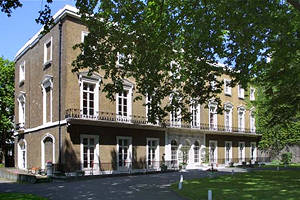 During the 1980s and early 1990s SMMT became increasingly involved in quality matters and improving supply chain management in the industry. This culminated in the creation of the SMMT Industry Forum operating from Birmingham with considerable support from the then Department for Trade and Industry. Its work has spread to other industries and its success is being replicated in other sectors of the economy.

The British International Motor Show returned to London, exhibiting at ExCeL in Docklands in 2006 and 2008. 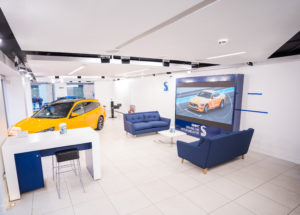 SMMT is now based at 71 Great Peter Street, in the very heart of Westminster, in the local of Parliament and major government departments. SMMT is one of the largest and most influential trade associations in the UK and continues to be heavily involved in political lobbying on behalf of the industry to ensure this vital sector of the economy is effectively represented to government. It supports the interests of the UK automotive industry at home and abroad, promoting a united position to government, stakeholders and the media.

The automotive industry is a vital part of the UK economy, and integral to supporting the delivery of the agendas for levelling up, net zero, advancing global Britain, and the plan for growth. It contributes £60 billion turnover and £12 billion value added to the UK economy, and invests around £3 billion each year in R&D. With more than 155,000 people employed directly in manufacturing and some 800,000 across the wider automotive industry, it accounts for 11% of total UK exports with more than 150 countries importing UK produced vehicles, generating more than £73 billion of trade.

More than 30 manufacturers build more than 70 models of vehicle in the UK, supported by more than 2,500 component providers and some of the world’s most skilled engineers. The automotive sector also supports jobs in other key sectors – including advertising, chemicals, finance, logistics and steel. Many of these jobs are outside London and the South-East, with wages that are around 25% higher than the UK average.