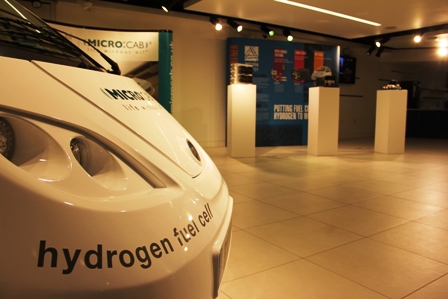 Measuring just 3.5 metres in length, the Microcab H2EV boasts a Lotus-engineered bonded-aluminium chassis, weighing just 60kg and allowing for both passenger car and commercial vehicle body-styles. Its Arcola/Horizon fuel cell allows the vehicle to travel up to 180 miles on a single 1.8kg tank of hydrogen, which can be filled in just three minutes.

While the infrastructure for hydrogen fuel cell vehicles is still in its infancy, projects such as the government-led UK H2Mobility, which aims to install 65 charging stations across the UK by 2015 and 1,150 by 2030, are helping to make it a sustainable alternative to conventional fuels. This is further supported by initiatives such as Club H, the world’s first fuel cell car club, which allows its 12,000 users access to 1,000 vehicles across London.