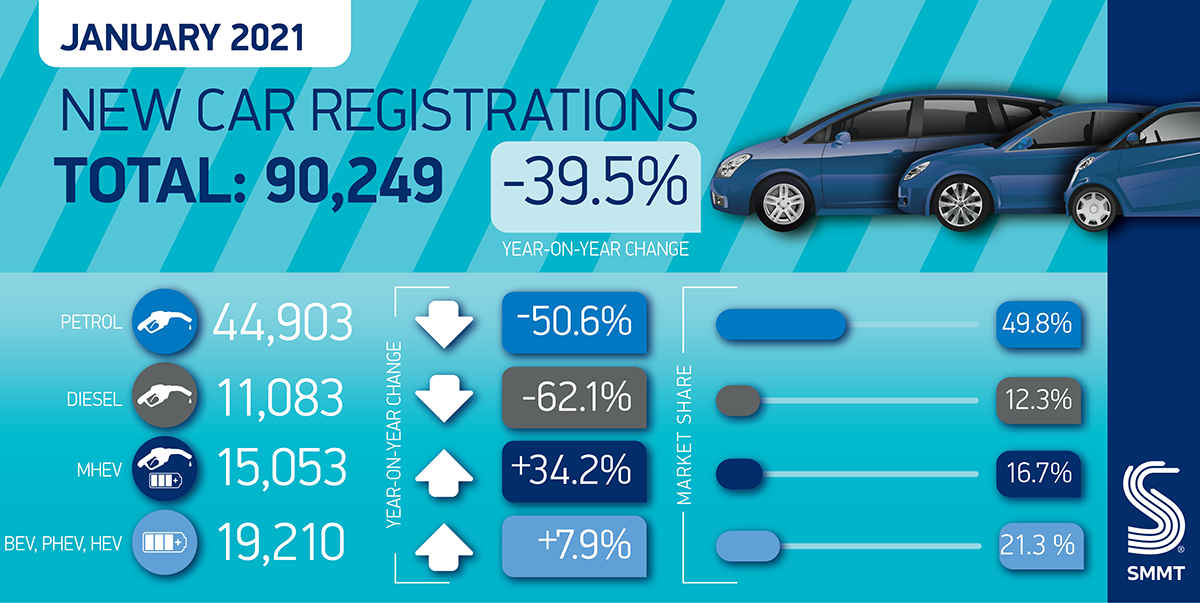 The UK new car market fell -39.5% in January with 59,030 fewer registrations compared to the same month last year, according to figures published today by the Society of Motor Manufacturers and Traders (SMMT). Just 90,249 cars were registered as showrooms across the country remained shut, leading to the worst start to the year since 1970.1 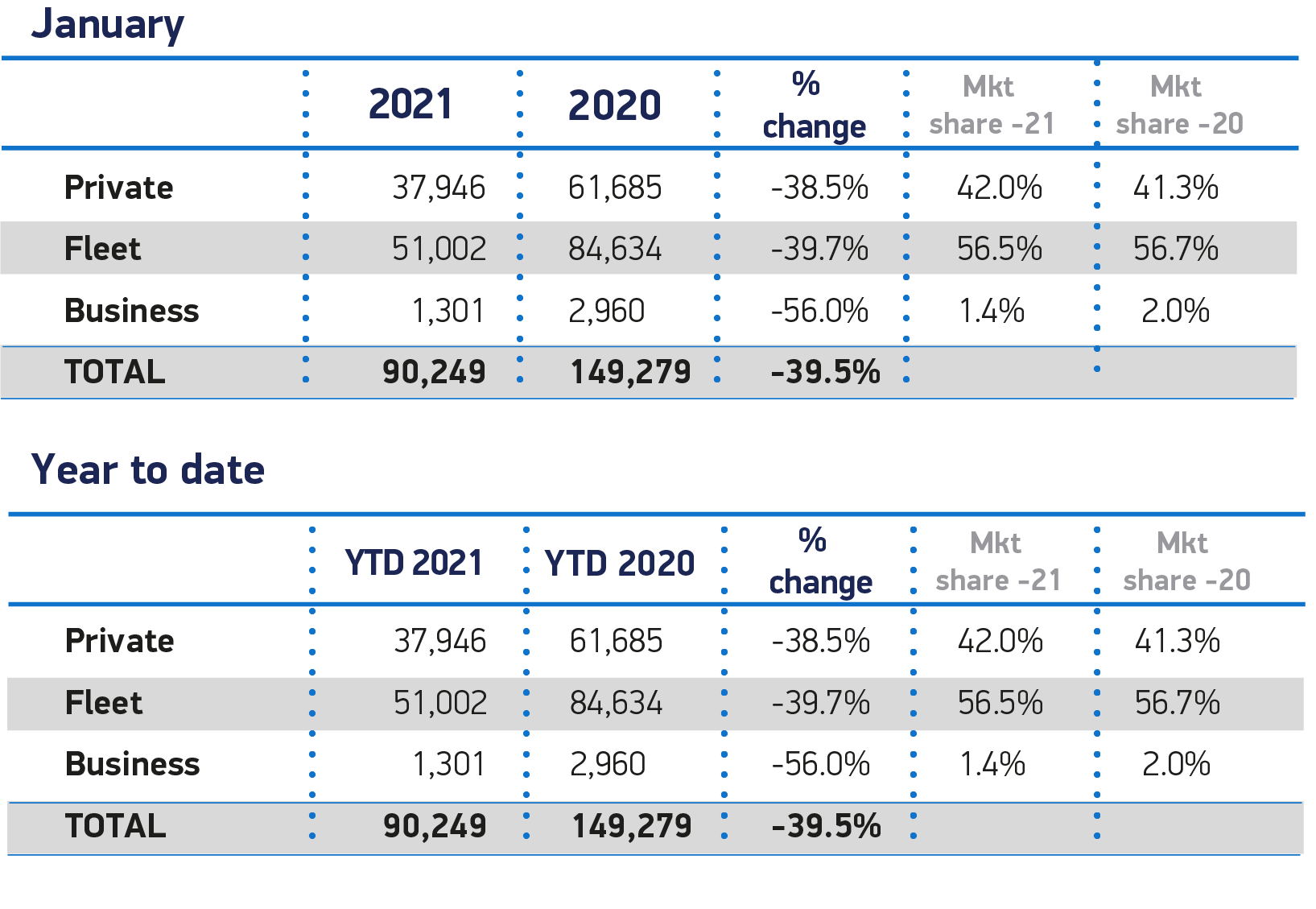 Demand remained depressed for both private buyers (-38.5%) and large fleets (-39.7%). Declines were also recorded in both petrol and diesel cars registrations, which fell by -62.1% and -50.6% respectively. On a positive, however, battery electric vehicle (BEV) uptake grew by 2,206 units (54.4%) to take 6.9% of the market, as the number of available models almost doubled from 22 in January 2019 to 40 this year. Combined, BEVs and plug-in hybrid vehicles (PHEVs) accounted for 13.7% of registrations. 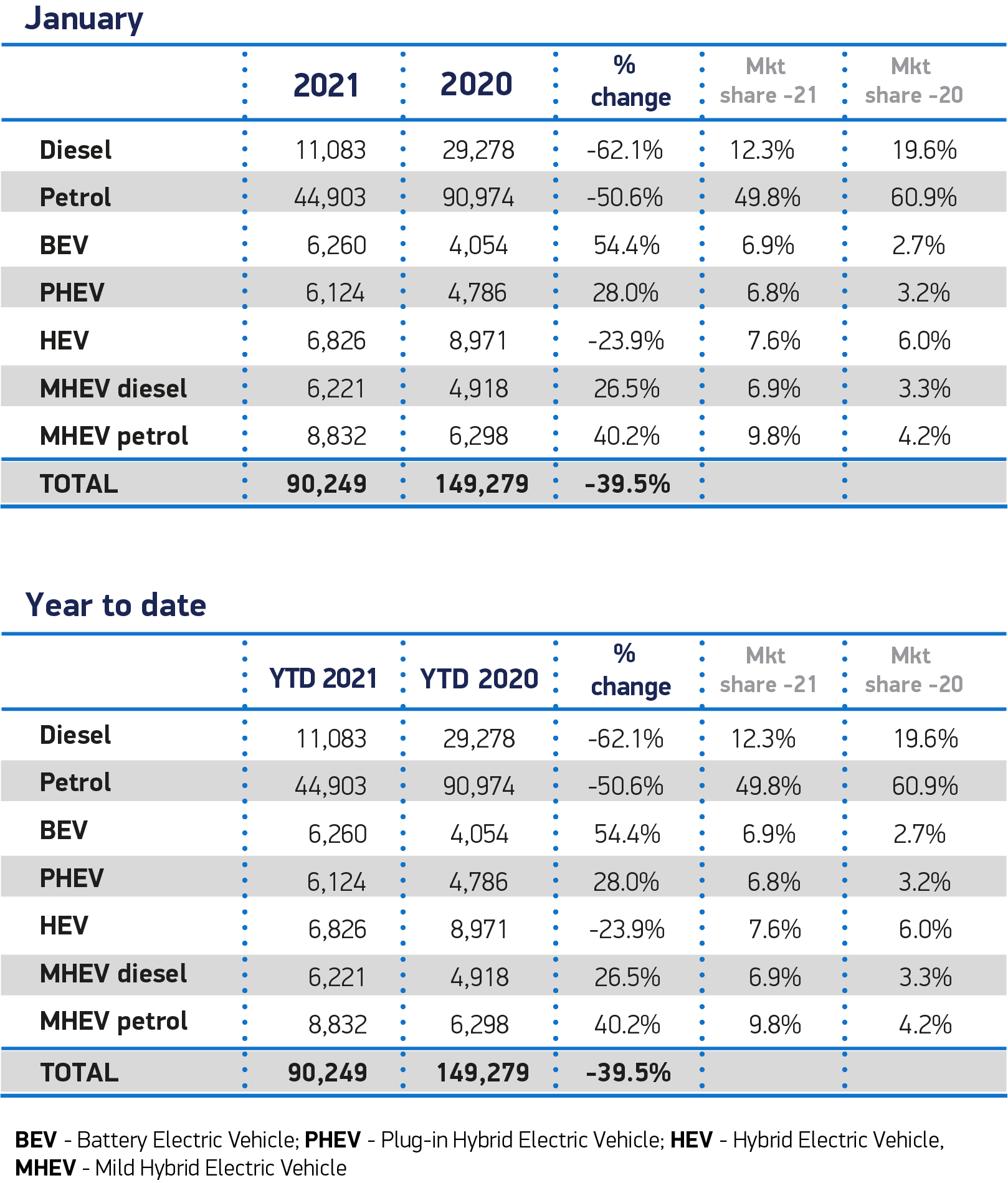 With lockdown restrictions in place until March – the most important month of the year for the sector, accounting for one in five new car registrations on average – the industry will face a challenging year as showroom closures depress consumer demand, which has a knock-on effect on manufacturing output. Opening dealerships as soon as it is safe to do so would help re-energise consumer confidence, supporting jobs and a green recovery. 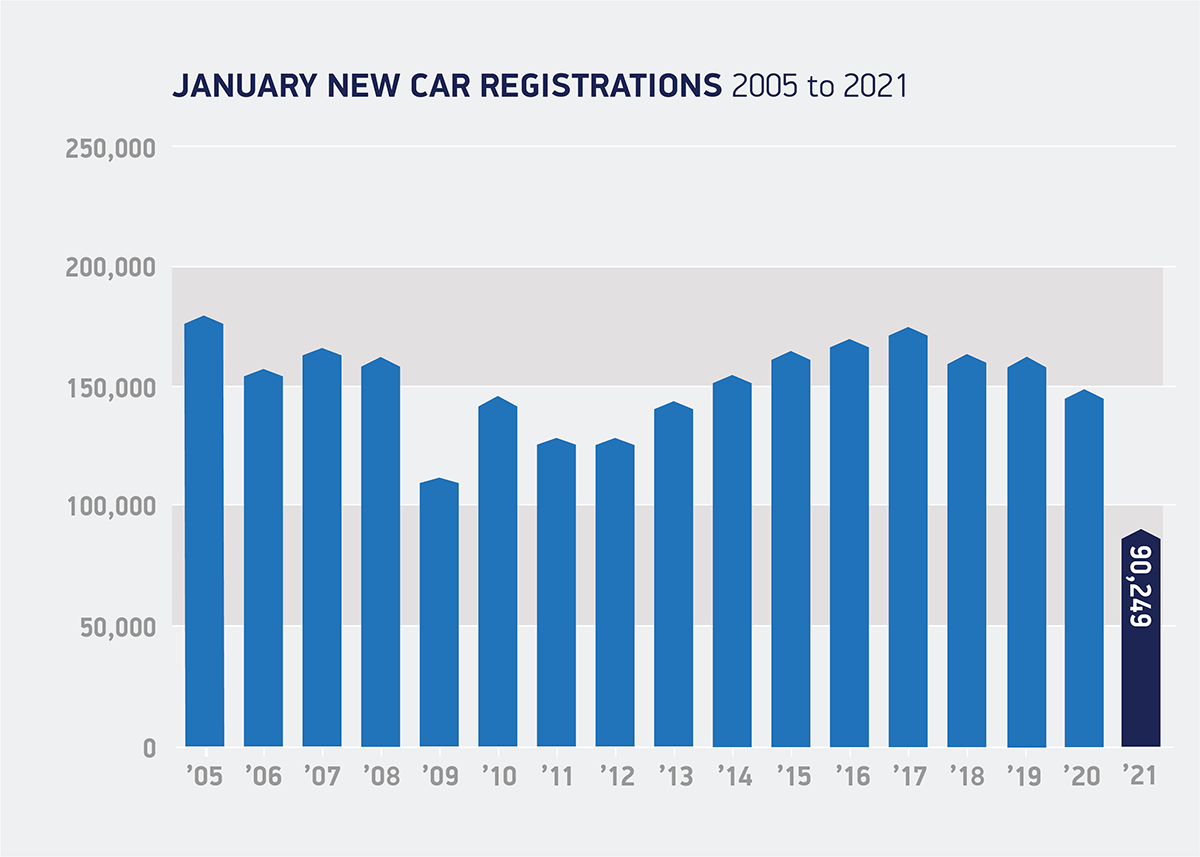 The effect of the current lockdown can be seen in SMMT’s latest market outlook. Having expected more than two million new cars to be registered in 2021, this forecast has now been downgraded to below 1.9 million given the more severe negative impact on first quarter performance and March in particular. The forecast does represent an increase of 15.7% compared to 2020’s ‘lost year’ but it would still be a very subdued market in historical terms, given the 10-year average new car market to 2019 was 2.3 million.2 More positively, however, BEVs and PHEVs are estimated to grow their combined market share from just over one in 10 new cars, to more than one in seven. 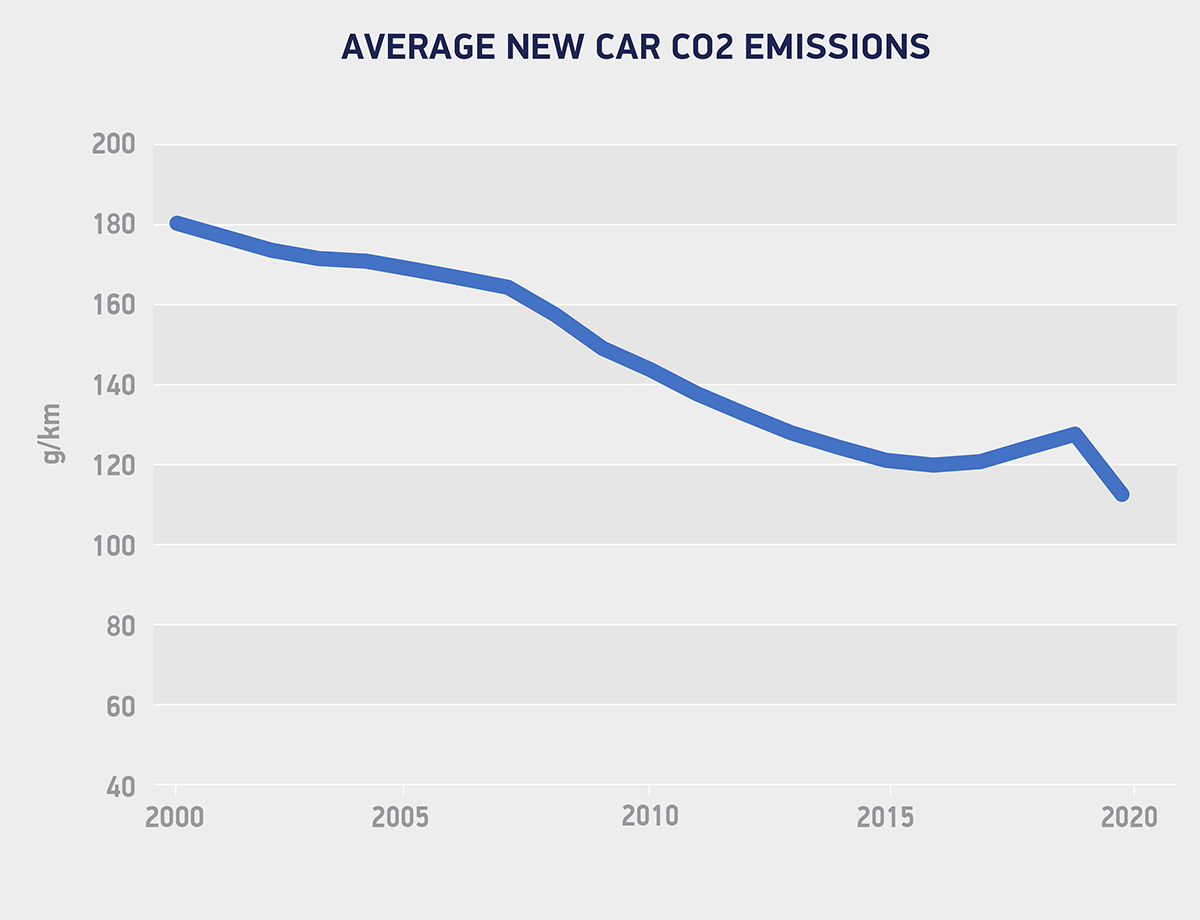 Such growth in ultra low emission vehicles would continue the trend seen in 2020. Latest SMMT analysis shows that 2020 recorded the largest ever fall in average car CO2 emissions, spurred on by increased uptake of BEV, PHEV and hybrid electric vehicles (HEVs) which accounted for almost one in six new car registrations. In fact, more than half of all BEVs registered in the past two decades were registered in 2020 alone. Combined with ongoing improvements to petrol and diesel engines, average vehicle CO2 dropped to 112.8g/km – a reduction of -11.8% compared to 2019 and -37.7% compared to 2000.

While all classes of car have reduced emissions by at least a third since 2000, one of the biggest reductions was achieved in dual purpose cars (-48.8%), aided by increased availability of BEV and other low emission models. Around 30% of dual purpose vehicles are now zero emission-capable, demonstrating their vital role in helping to reduce overall CO2 emissions.

There can be no let-up in the pace of environmental improvement, however, as the industry must achieve a UK-only CO2 fleet average target of 95g/km this year or face severe penalties. This underscores the need to get showrooms open as soon as Britain emerges from lockdown, so they can generate the demand required to reach the country’s green goals.

Following a £20.4 billion loss of revenue last year, the auto industry faces a difficult start to 2021. The necessary lockdown will challenge society, the economy and our industry’s ability to move quickly towards our ambitious environmental goals. Lifting the shutters will secure jobs, stimulate the essential demand that supports our manufacturing, and will enable us to forge ahead on the Road to Zero. Every day that showrooms can safely open will matter, especially with the critical month of March looming.