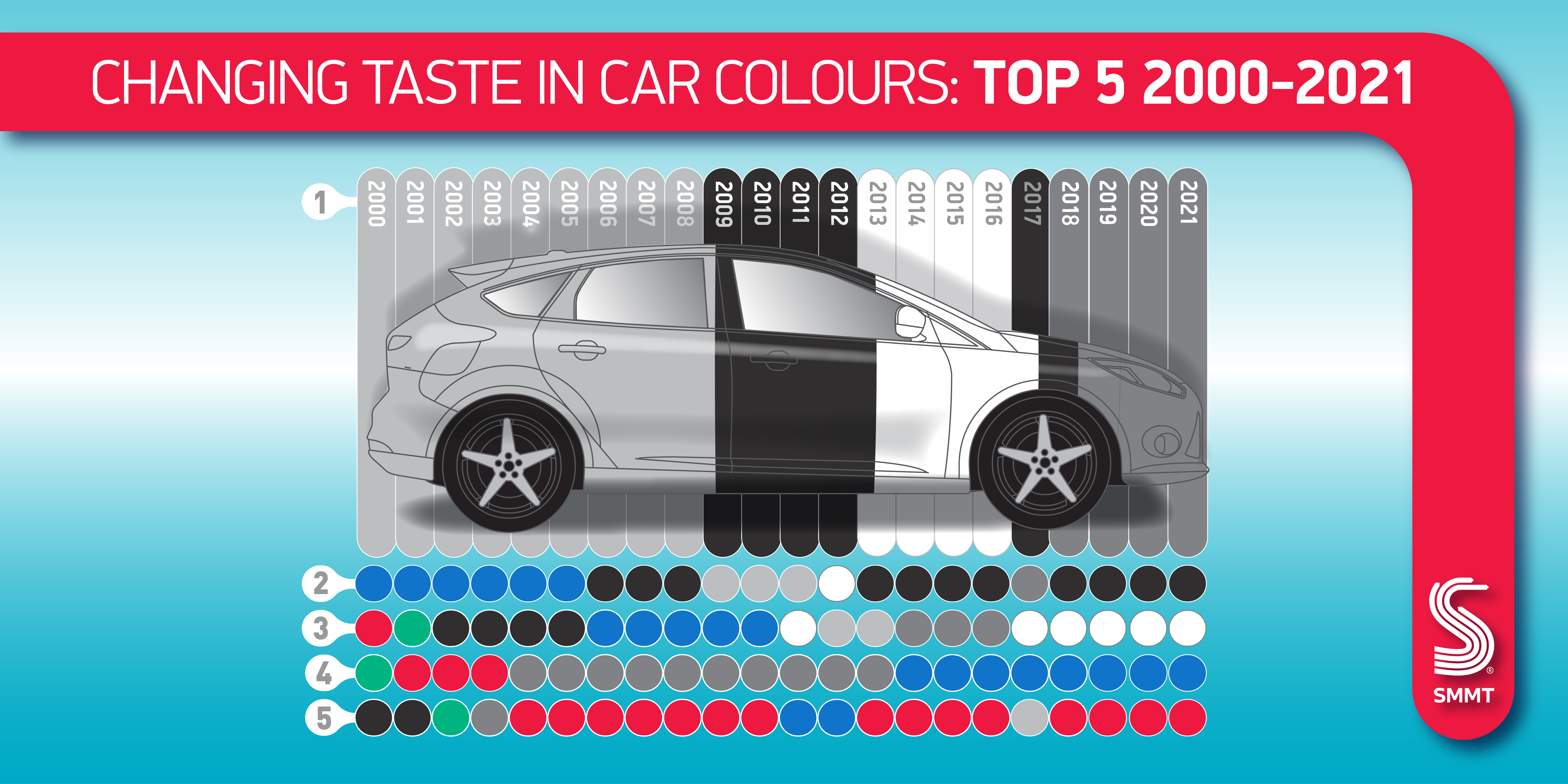 British drivers doubled down on their preference for monochrome cars in 2021, with grey increasing its dominance as the UK’s favourite new car colour for the fourth year in a row, according to figures published today by the Society of Motor Manufacturers and Traders (SMMT). During a year of pandemic-related disruptions impacting total new car registrations, 408,155 grey cars were sold, up 2.8% and accounting for a quarter (24.8%) of the market.

Black, the most popular car paint in Britain from 2009 to 2012, wrapped 20.5% of passenger cars, while white was in third place (17.2%), meaning UK drivers were most likely to choose a monochrome car for the 11th year running. More than six in 10 (62.4%) of all new cars joining British roads in 2021 were painted in one of these shades, although blue edged closer to the top three, increasing its sales (1.4%) for the first time in five years and trailing just 2,638 units behind white. 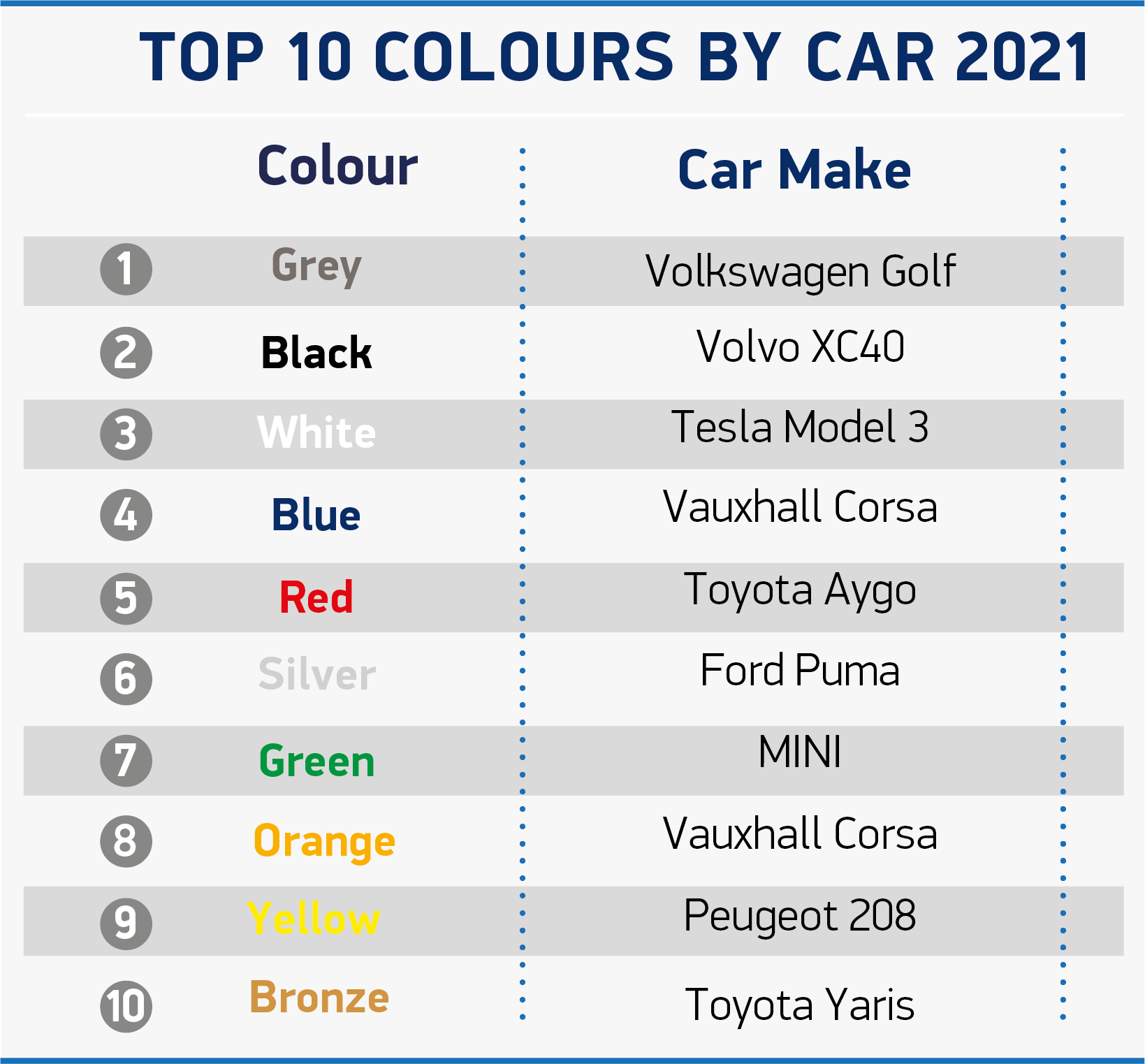 The rest of the top 10 remained largely unchanged from 2020, although green overtook orange to gain seventh place, cladding 17,927 cars. Sales of green cars rose for the first time since 2015, with 24.0% more buyers opting for the colour than in the previous year.

A record number of drivers also opted for ‘green’ under the bonnet, with battery electric and plug-in cars accounting for more than one in six registrations – up from around one in 10 in 2020 and one in 30 in 2019. However, whether battery electric, plug-in hybrid, hybrid, petrol or diesel, grey was the colour of choice across all fuel types. 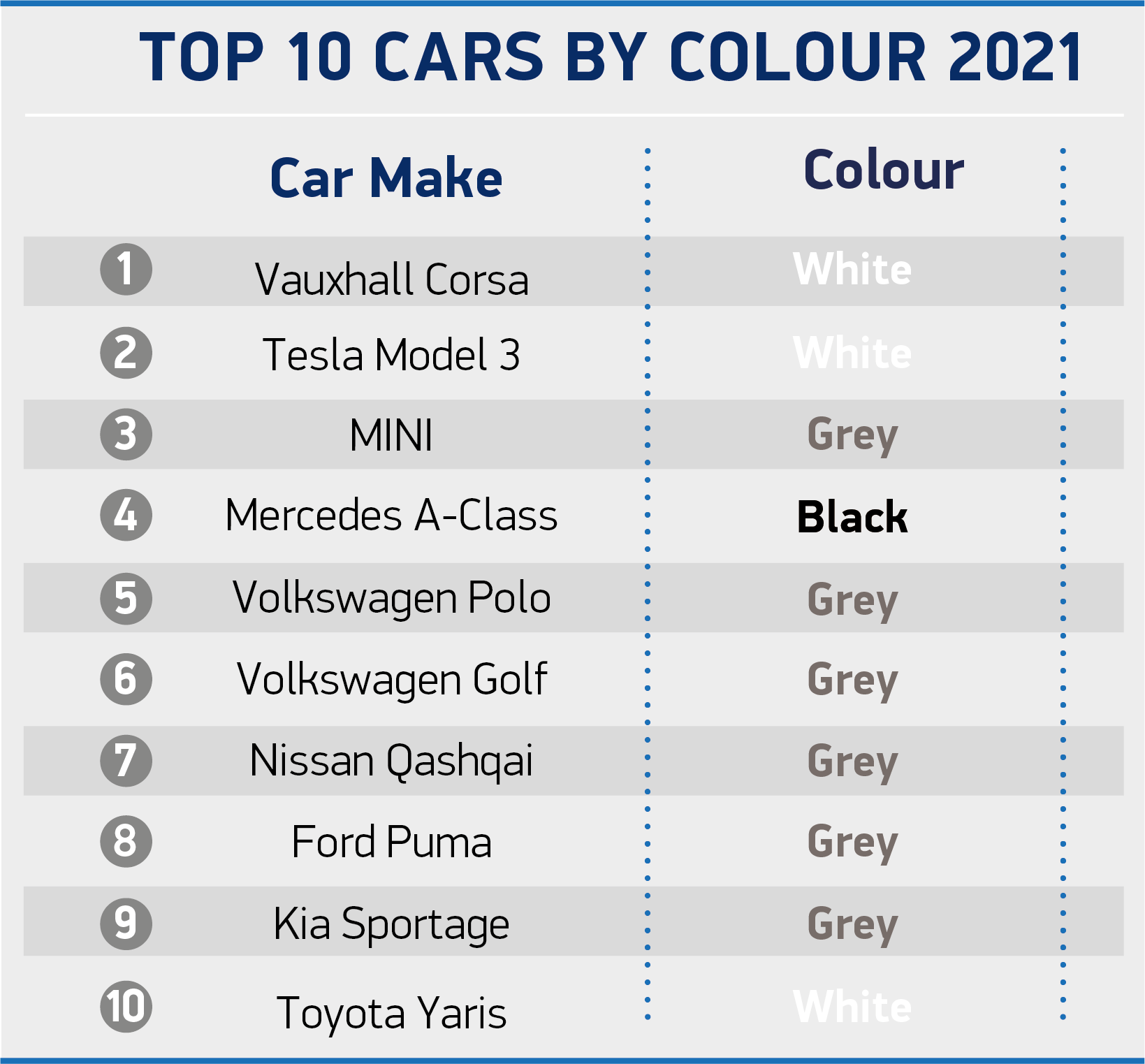 White was the most popular shade for mini-sized and sports cars, while larger dual purpose, luxury saloons and executive cars were, as usual, most likely to be black.

At the niche end of the colour palette, gold, yellow and turquoise were the fastest growing colours, with gold more than tripling its appeal (up 231.8%), yellow up by a third (31.3%) and turquoise up by a fifth (19.2%), although together they accounted for less than one percent of the market (0.9%). 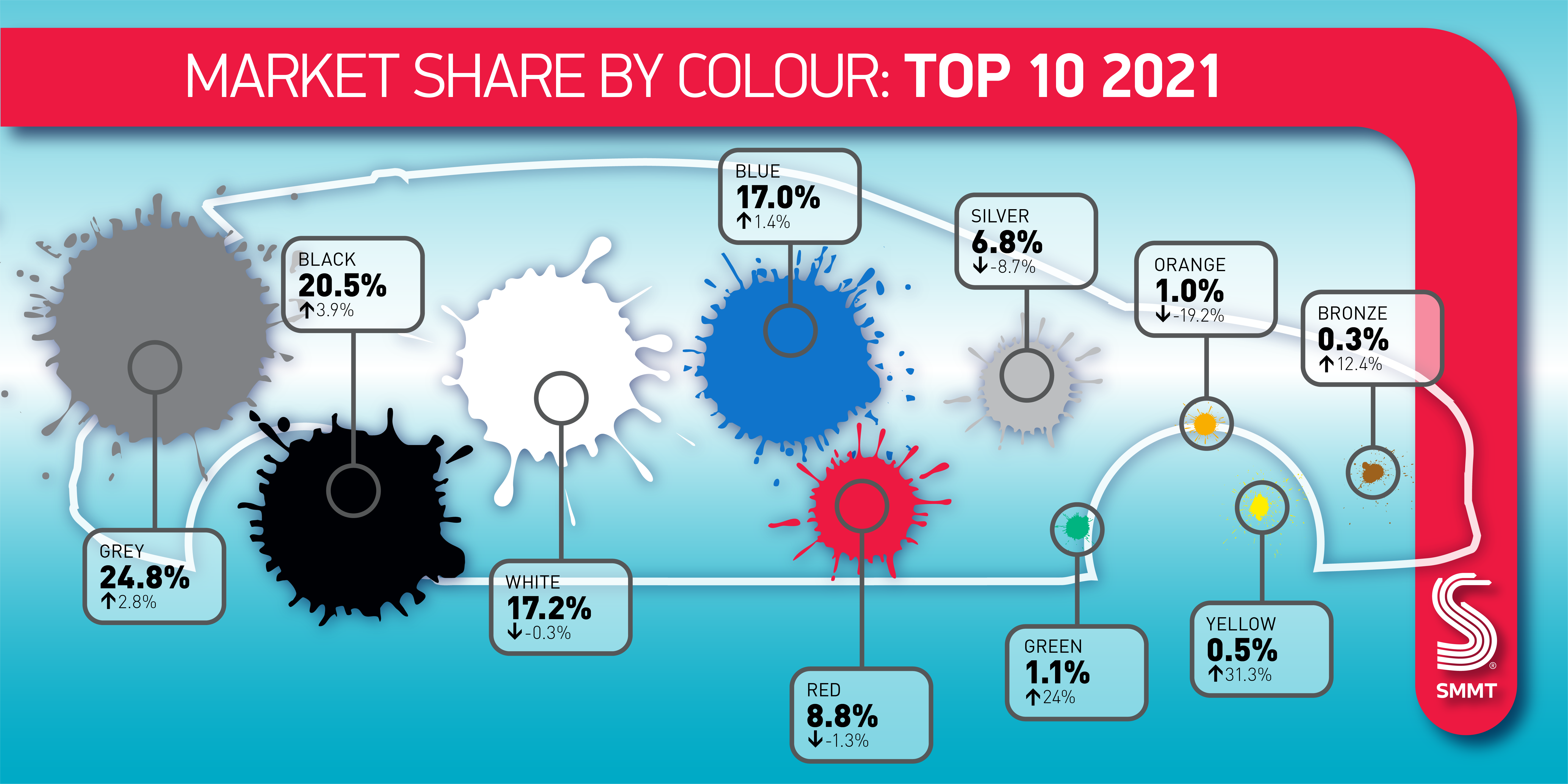 2021 was anything but normal, but British drivers stuck to their familiar favourites of grey, black and white cars. But while last year’s new cars might share the same shades as previous years, under the bonnet there has been a real shift, with one in six buyers choosing to go green.

With car registrations still low compared to pre- pandemic, helping even more drivers move to greener cars – whatever the actual colour – has never been more important. Incentives are helping move the market and should continue, but the speed of this shift to electric must be matched by an acceleration in the pace of charging infrastructure investment. Drivers should expect to be able to recharge irrespective of wherever they live, work or visit.

A non-monochrome colour has not been among the UK’s overall top three since blue in 2010, although it was second most popular colour amongst Welsh and Northern Irish new car buyers. Grey was the top colour in every British nation last year, but more so in England (25.3%), closely followed by Scotland (22.9%), Wales (22.8%), and Northern Ireland (21.7%).

Counties sporting bright-coloured cars included Bedfordshire, the most likely place to see a new pink car, with 66 registrations, while Greater London and Buckinghamshire had the highest numbers of green and turquoise motors, with 1,263 and 238 registrations respectively. Orange was the new black in the West Midlands, where tangerine-tinted cars accounted for 1,156 registrations, the highest in any UK region.

Scotland was, however, the least likely place to spot a new maroon car, as none were sold in the country. In fact, just 12 buyers across the whole of the UK specified their new car in the colour – the lowest number since 1997.

Consumer preference for grey, which comes in many varying shades, can be attributed to a wide range of reasons; it can be a sleek and deeper tone than other shades, is well-suited to black trims and darker wheels and offers an attractive compromise between the also-popular black and white, with wider resale appeal than brightly coloured cars, so a potentially ‘safer’ choice, especially as it reduces the visibility of dirt more than the other shades.