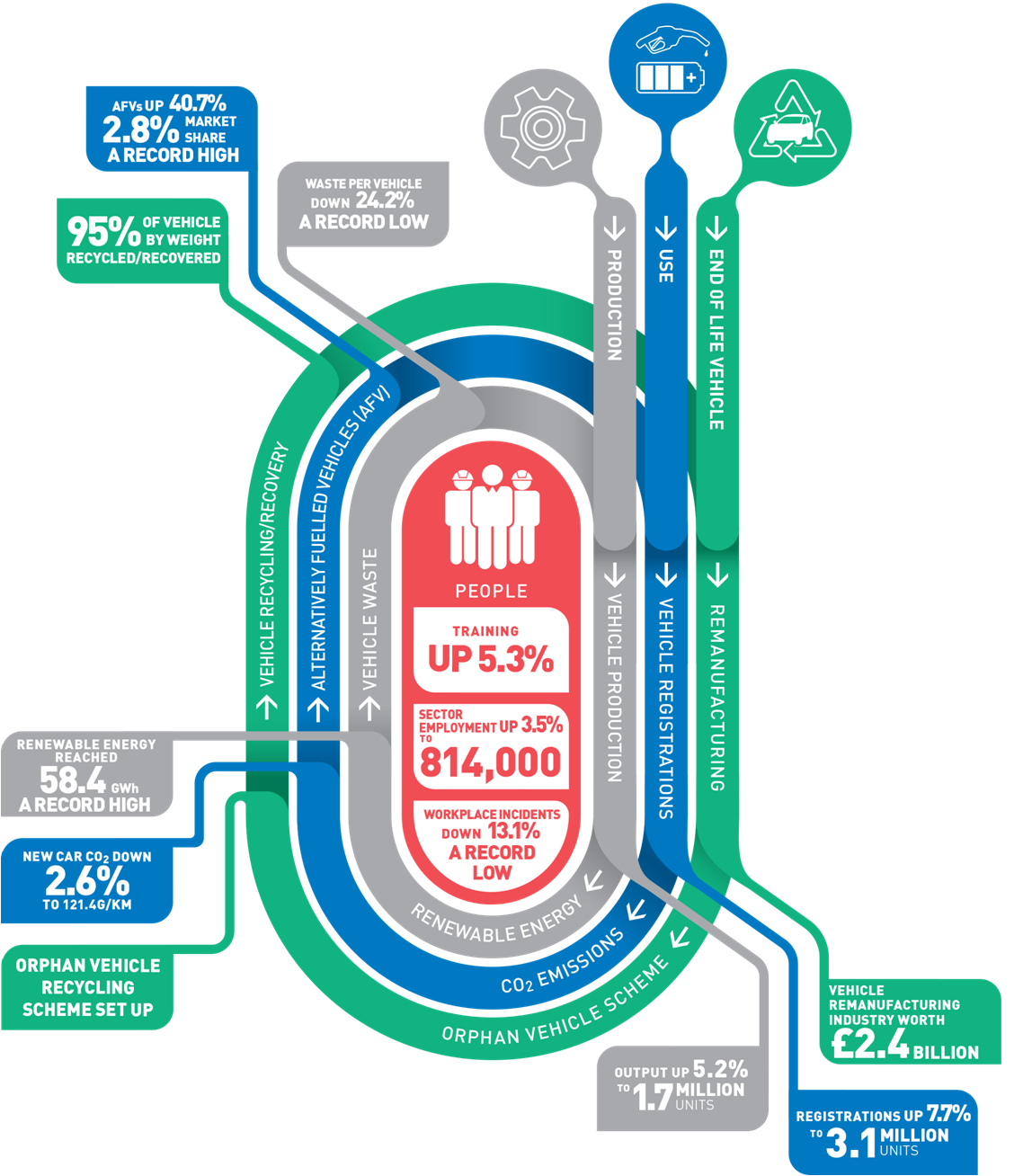 The UK automotive industry continues to make significant gains in employment, economic contribution and environmental performance, according to new figures released today by the Society of Motor Manufacturers and Traders (SMMT).

The industry body’s 17th annual Sustainability Report reveals that the automotive manufacturing sector turned over a record £71.6 billion in 2015. Jobs, production output and vehicle sales all grew while the environmental impact of manufacturing saw significant reductions. Waste from production was cut by almost a quarter, and water and energy use per vehicle produced were also reduced.

Access to the single market and EU-negotiated international trade deals, the ability to recruit talent internationally and influence new standards have all helped make the UK automotive industry one of the world’s most competitive. This has helped attract billions of pounds in investment in recent years, delivering record productivity, job creation and growth.

The record turnover by automotive manufacturers represents a 7.3% increase on 2014, with the additional value generated for the UK economy standing at some £18.9 billion – itself a 3.8% rise on the previous year. Investment in R&D by the industry also reached a record high of £2.5 billion in 2015, which now represents some 12% of the country’s total R&D spend.

The figures are further evidence of the UK’s status as a global automotive leader, as production and sales of UK-built vehicles continue to grow both at home and abroad.2 The strong performance has been matched by growth in employment, with 814,000 people across the UK now dependent on the sector as a whole for a job – a substantial increase of 17,000 over the previous year. Those employed directly in manufacturing, meanwhile, grew from 161,000 to 169,000, with the average manufacturing worker generating more than £110,000 in value-added to the British economy.3

The sector’s strong social and economic performance has been achieved while simultaneously delivering substantial reductions in its environmental impact. 41% less waste was sent to landfill in 2015 than in the previous year, while the amount of water used to make each vehicle fell to a new low – down by 7.6%, driven largely by improvements in painting processes. Meanwhile, the average new car registered in 2015 emitted 121.4g/km of CO2 – 2.6% less than in 2014.

Mike Hawes, SMMT Chief Executive, said, “UK Automotive has gone from strength to strength, and is now delivering record turnover, record productivity and more jobs. These strong results go hand in hand with a steadfast commitment to improving our environmental performance, which is clearly demonstrated through reductions in CO2, waste and water use.

“This success has been due to unrestricted access to the single market, input to EU legislation to safeguard the interests of UK Automotive, and the ability to recruit talent from abroad. Our growth depends on certainty and continued open and reciprocal access to the 100-plus markets with which the UK automotive industry so successfully trades. This is not just finished cars but components, technologies and the wider automotive value chain. Any risks and uncertainty to these fundamental benefits need to be addressed head on by UK government.” 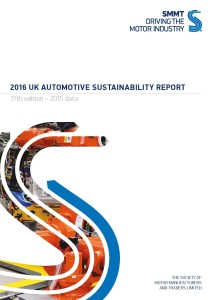 Preserving and reusing valuable natural resources are major priorities for the automotive industry: notably, more than a third of all companies participating in the Sustainability Report now send no waste at all to landfill. Meanwhile, in February this year, SMMT launched a free recycling ‘take-back’ service to ensure owners of cars whose parent brand no longer operates in the UK can have their vehicle collected and recycled free of charge at the end of its life.4

With an estimated 5,000 vacancies across the industry currently unfilled due to a shortage of available skills, companies are investing heavily in developing the workforce of the future. Sustainability Report signatories alone reported an intake of 825 new apprentices in 2015, up from around 500 the previous year, while each employee across the sector received an average 2.9 days of training – a rise of 5.3%.

Today’s figures are the latest evidence of the UK automotive industry’s strong performance across all areas. Car manufacturing output is already up more than 10% so far in 2016, 2015 saw almost 1.6 million cars made here – the highest volume in a decade – while demand for both cars and commercial vehicles in the UK reached record levels with 2,633,503 million and 420,000 registrations respectively.2

SMMT recently revealed that its supply chain members plan to invest £225 million in new jobs, machinery and new product development in the next three years,5 underscoring the need for economic stability. Meanwhile, the UK’s vehicle service and repair sector was revealed as one of the most competitive in Europe, with British motorists spending £21.1 billion every year looking after their cars – 12% more than the global average – as they ensure their vehicles remain safe, efficient and in fine fettle.6

These developments mean the sector is well placed to meet increasingly stringent environmental targets, as well as take advantage of opportunities from emerging alternative fuel and connected and autonomous vehicle technologies.