Feature: What the British public really thinks about lorries and HGVs

Volvo Trucks conducted a survey of public attitudes to lorries earlier this year and has now published the results. It found that Brits care more than you might think about our sector.

Of the 2,095 adults quizzed, 92% said they “recognised the role lorries play in the smooth running of everyday life,” while 96% agreed that driving an HGV “requires significant skill and training, and that driving ability varies from country to country”.

The aim of the study was to better understand the public’s perception of heavy goods vehicles, specifically in relation road safety, driver behaviour and the vehicles’ contribution to the nation. Respondents comprised car, van and lorry drivers, motorcyclists, cyclists and pedestrians of varying ages.

“We were pleasantly surprised by the survey results, and are incredibly proud to provide for an industry and a profession that are so respected in Britain and bring so much to the economy,” said Mike Corcoran, Commercial Director at Volvo Trucks.

“We have shown on-going commitment to driving a better understanding of the lorry driving profession while educating different road users on how to behave around large vehicles. This survey has allowed us to understand the public’s broader concerns, and with the upcoming UK launch of our ‘See and Be Seen’ campaign [an effort by the manufacturer to improve the interaction between cyclists and lorry drivers] we will continue to work with the government and the haulage industry to make the roads a safe place.”

Commenting on the results of the survey, Christopher Snelling, Head of National and Regional Policy at the Freight Transport Association, was particularly pleased by the public’s acknowledgement of what it actually takes to drive an HGV.

“Lorries are the lifeblood of British industry, transporting the raw materials and finished goods required to keep Britain trading. It is especially gratifying that those surveyed recognise the levels of professionalism needed to drive a lorry – it is a high pressure, stressful job with much responsibility, and one which our members are particularly proud to undertake.

“Of course, operators recognise the need for high levels of vigilance on Britain’s roads, and huge strides have been made in recent years by manufacturers in continuing to improve the safety features in their vehicles. These improvements have made our roads safer than ever, but it is imperative that all road users continue to treat each other with respect and vigilance to ensure trade can continue to flow smoothly throughout the country.”

Though they gave HGVs a near universal thumbs up, Brits still have some concerns about the presence of large vehicles on the roads. The results showed that 77% of respondents believed lorries to be a risk on single carriageways (themselves the most dangerous type of roads), while a lesser 47% thought they were a risk on motorways and dual carriageways. Precisely half of those surveyed said their chief concern was that lorry drivers were unable to see them. 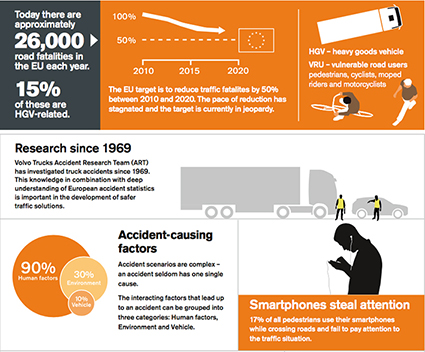 That said, only a minority were worried about ancillary issues with lorries. Just 8% of respondents said they were concerned about insecure loads, while a paltry 4% were bothered about poorly maintained equipment, which further proves the public’s confidence in drivers’ abilities.

Opinion is divided as to how best to improve the safety of HGVs on British roads. Most popular was the idea of creating dedicated lanes for lorries on dual carriageways; 45% of respondents thought this the best method, but it was the favourite only by a narrow margin, as those surveyed considered the following three initiatives the best course of action – each by 44%: increasing the level of mandatory driver training, better educating new motorists as to how to behave around lorries as part of the driving test and encouraging more police spot checks of HGVs to ensure standards are met. Finally, 40% thought banning lorries from overtaking other vehicles was the best way forward.

In addition to establishing the public’s perception of HGVs, the survey also probed opinion on more general road safety matters and, 76% of respondents believed all road users had a shared responsibility to make the highways safer. Equally, they felt that both government and the haulage industry could do more to develop a “culture of safety” on UK roads; 40% wanted to see the former do more, while only 27% felt the road haulage industry was doing enough to assess drivers’ safety performance.

“It is essential that we all take responsibility for our own safety and that of others on the road,” said John Comer, Volvo Trucks’ head of product management, “we are working with local authorities in Warwickshire to roll-out our ‘See and Be Seen’ initiative and welcome local schools, colleges and universities across the UK to contact us, should they be interested in joining the campaign. We want to involve as many road users as possible, starting with the most vulnerable.

“As such, [we] will continue to drive a greater understanding of the trucking industry among the public and industry stakeholders, in order to find ways of working together to increase road safety awareness around lorries for everyone.”

Along with the results of the survey, the manufacturer also launched its aforementioned See and Be Seen campaign in July. The idea, as Comer hinted, is to raise awareness, specifically among cyclists, but also among other road users about their visibility to HGV drivers, and the initiative comprises a series of activities that highlight situations in which the likes of cyclists and lorries are likely to interact.

It has published an education kit, which is available to anyone and can be downloaded from its website [link to text: http://www.volvotrucks.co.uk/en-gb/about/safety/see-and-be-seen.html], comprising an instructor’s guide, a PowerPoint presentation and advice on how to carry out an outdoor exercise involving a truck.