Autonomous buses to debut in Cambridge

The UK’s first fully guided busway is being used to trial new self-driving transport pods, billed as the most advanced feasibility study yet, bringing fully autonomous vehicles a step closer to the UK.

Using the pioneering Cambridgeshire Guided Busway, which runs between the city centre and nearby commuter towns, Coventry-based RDM Group is using its PodZero concept vehicle to complete feasibility studies. Part-funded by Innovate UK, the £250,000 project is being delivered in partnership with Connecting Cambridgeshire and the Smart Cambridge Programme, to evaluate the business case for a future self-driving shuttle service. If successful the project will ultimately lead to an autonomous bus service that will run after 8pm on weekdays and during the weekend, making it ideal for late night workers, revellers and weekend shoppers. 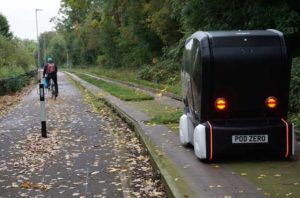 The project is exploring routes connecting sites in Cambridge with other transport options; the first, running between Trumpington Park and Ride and Cambridge Station, via Addenbrooke’s Hospital, and the second, a new service between the Wellcome Genome Campus and Whittlesford Parkway Railway Station.

“It is segregated from the highway allowing the pods to whizz up and down without traffic congestion slowing them down and also segregated from pedestrians and cyclists meaning it is a really safe route.”

He continued: “Research has shown that there is demand for hundreds of journeys in the hours when the buses do not run. This is simply due to the cost and the pods can offer a solution that is cheaper to run…this is not replacing the existing service, just complementing it with a practical and effective solution during quieter times of the day.

“The technology in the PodZero is ideal for replicating the conditions an autonomous bus will run under and, the fact it could be quickly deployed, means we can deliver the data, information and experience required to get the fleet of larger, 10-seater autonomous buses on the busway a reality sooner rather than later.” 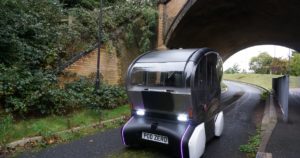 Councillor Francis Burkitt, Chair of the Greater Cambridge Partnership, which supports the Smart Cambridge programme and commissioned the initial feasibility study by the University of Cambridge, said: “It’s exciting that testing of autonomous (driverless) vehicles on the Busway is now underway as part of our on-going collaborative work to transform the way people travel into, out of and around the city.”

“The Busway already provides a ready-made link between the Cambridge Biomedical Campus, Trumpington Park & Ride, Cambridge railway station and the city centre.  In future, autonomous shuttles could help to meet the demand for services in the evenings and at weekends when the buses are not running, giving more people the opportunity to travel sustainably on key routes into the city.”

RDM Group, which has recently announced its international expansion, opening offices in Australia and the US, will design and manufacture a larger version of its four passenger self-driving pods to suit the location and customer needs, with the ‘autonomous buses’ able to accommodate wheelchairs, mobility scooters and bicycles.