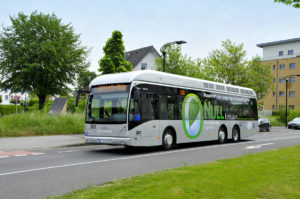 30 examples of the A330 will operate in Cologne with the remaining 10 serving routes in Wuppertal. 12 metres in length and offering 29 seats with up to 49 standing, the tank capacity of 38.2kg of hydrogen allows the bus to cover 350km before refuelling.

Van Hool has already delivered 85 hydrogen buses across the world, with a further eight hydrogen-powered tram buses to be delivered to France by the second half of 2019.

Eugen Puderbach, CEO of Regionalverkehr Köln GmbH (RVK), said, “Buses with hydrogen-powered fuel cells are among the most environmentally friendly vehicles in public transport. They don’t emit any harmful substances and are much quieter than conventional city buses. By using 30 additional buses with fuel cells, we are steadily progressing on our chosen path towards sustainable public transport in our area”.