The UK’s capital is to get the biggest individual double-decker bus fleet in Europe, with Transport for London (TfL) ordering 68 of the high capacity EVs to be launched across the city between now and summer 2019.

It was also confirmed that two major routes from Barnet to central London will be exclusively operated by electric double-deckers. 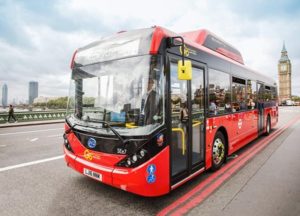 Next year, TfL aims to have 240 electric buses in operation, with all new double-decker buses to be zero-emissions or hybrid, followed by every single-deck bus in central London the year after.

The largest slice of Transport for London’s order will go to the ADL/BYD partnership, which will supply 37 of its Enviro400EV buses to go into service with operator Metroline in spring 2019.

The 10.9m long electric double deckers will feature ADL’s City style bodywork with a glazed staircase and will be built to TfL’s comprehensive specification. They will use BYD’s Iron-Phosphate battery system which enables the buses to run all day on a single charge using cost effective off-peak electricity.

These buses, based at Metroline’s Holloway depot, will serve Route 43 from London Bridge to Friern Barnet.

The remainder of the order will be supplied by Optare, which will supply 31 all-electric double deck Metrodecker buses for TfL Route 134 running from North Finchley bus station to Tottenham Court Road, which will start operation next summer.