The UK is in pole position in the global race to market for connected and autonomous vehicles (CAVs), with a £62 billion boost to the UK economy by 2030 up for grabs, according to a major new report published today by the Society of Motor Manufacturers and Traders (SMMT) and Frost & Sullivan.

Connected and Autonomous Vehicles: Winning the Global Race to Market,1 analyses the wide-ranging societal and economic benefits to be achieved by gradually increasing CAVs on our roads. 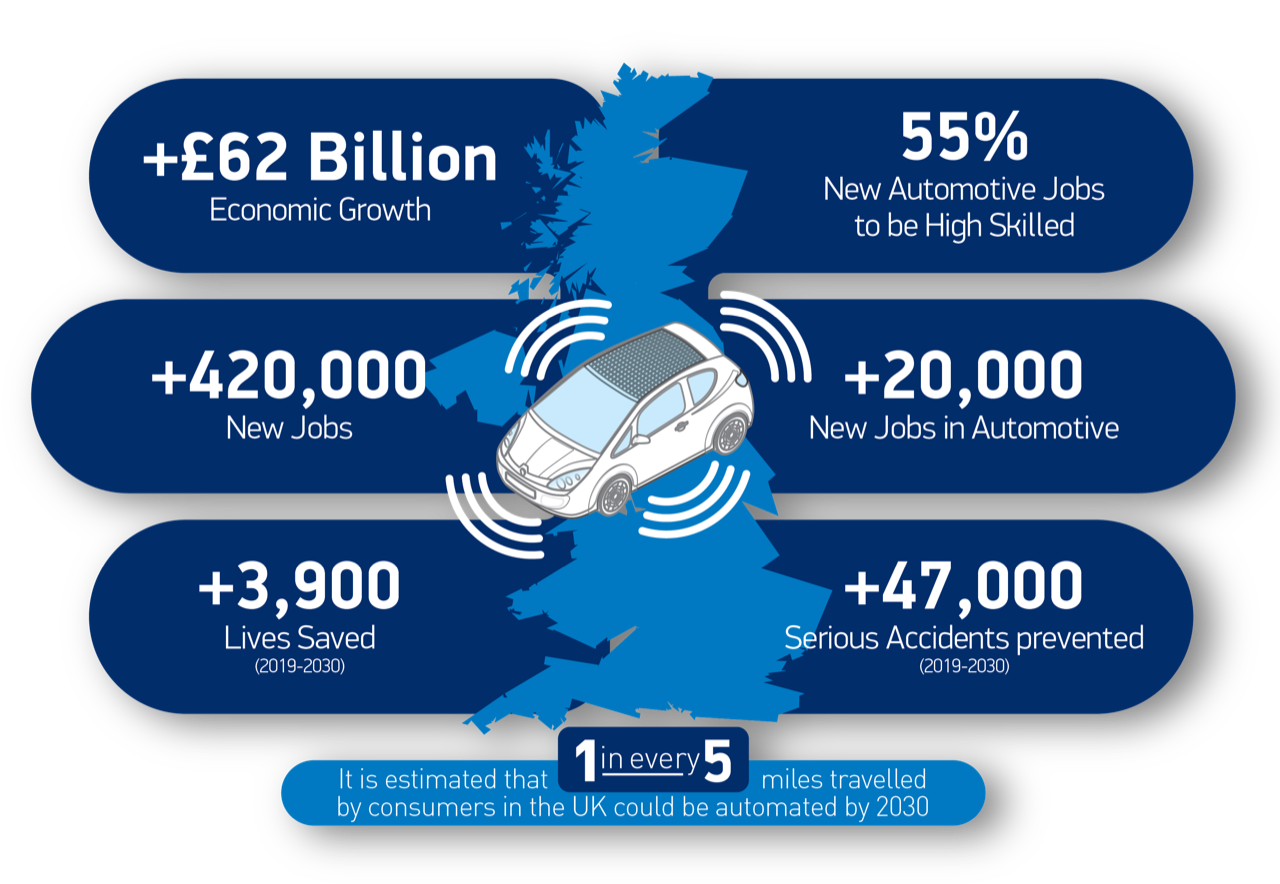 The UK is in a strong position to capitalise, with more than £500 million already committed by industry and government to CAV R&D and testing. Autonomous driving trials are taking place in our major towns and cities, we are home to four major CAV test beds and three additional sites focused on highways, rural and parking, with more than 80 collaborative R&D projects underway. The next game-changing step is to move from testing CAV technologies to deployment in the real world. 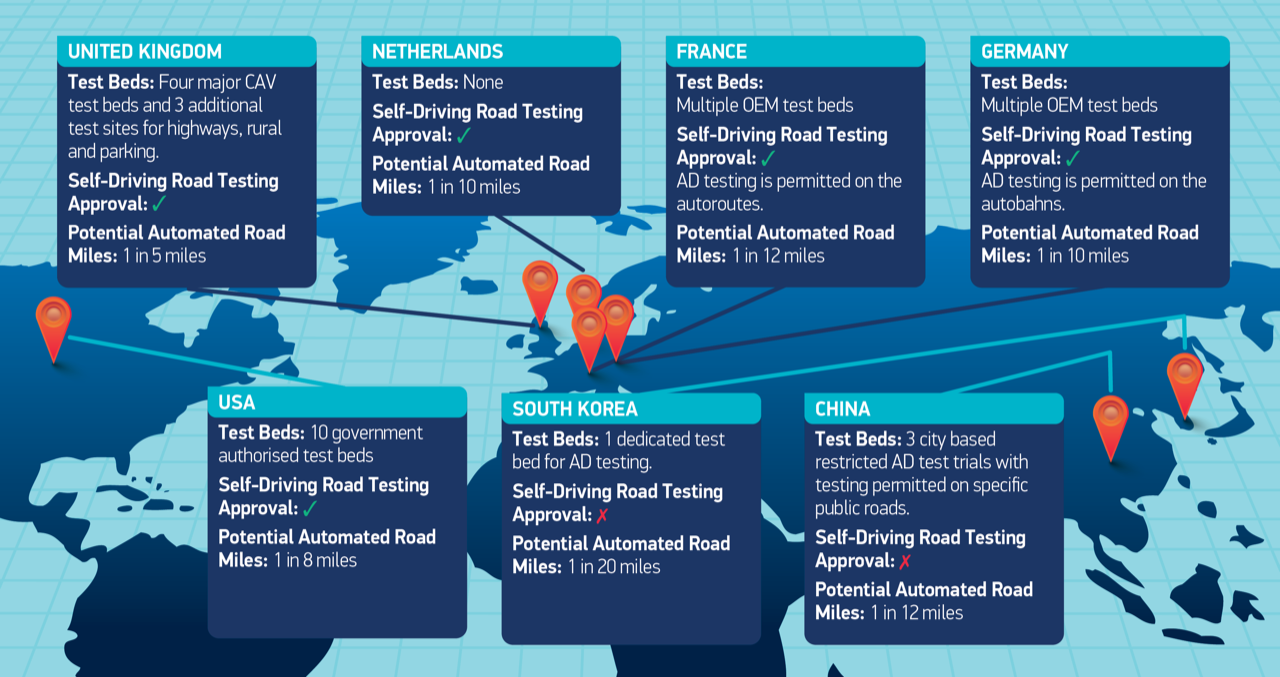 Advanced driver assistance systems (ADAS) such as Autonomous Emergency Braking and Collision Warning are already available on the majority of new cars registered in the UK.2 Combined with the gradual introduction of automated vehicles from 2021, this will deliver massive safety benefits. Over the next decade, the technology is set to prevent 47,000 serious accidents and save 3,900 lives.

At the same time, some 420,000 new jobs will be created, including in the automotive industry and other sectors such as telecoms and digital services. Driving commuters, meanwhile, will gain back the equivalent of a full working week thanks to more ‘downtime’ and smoother traffic flows during their commute. 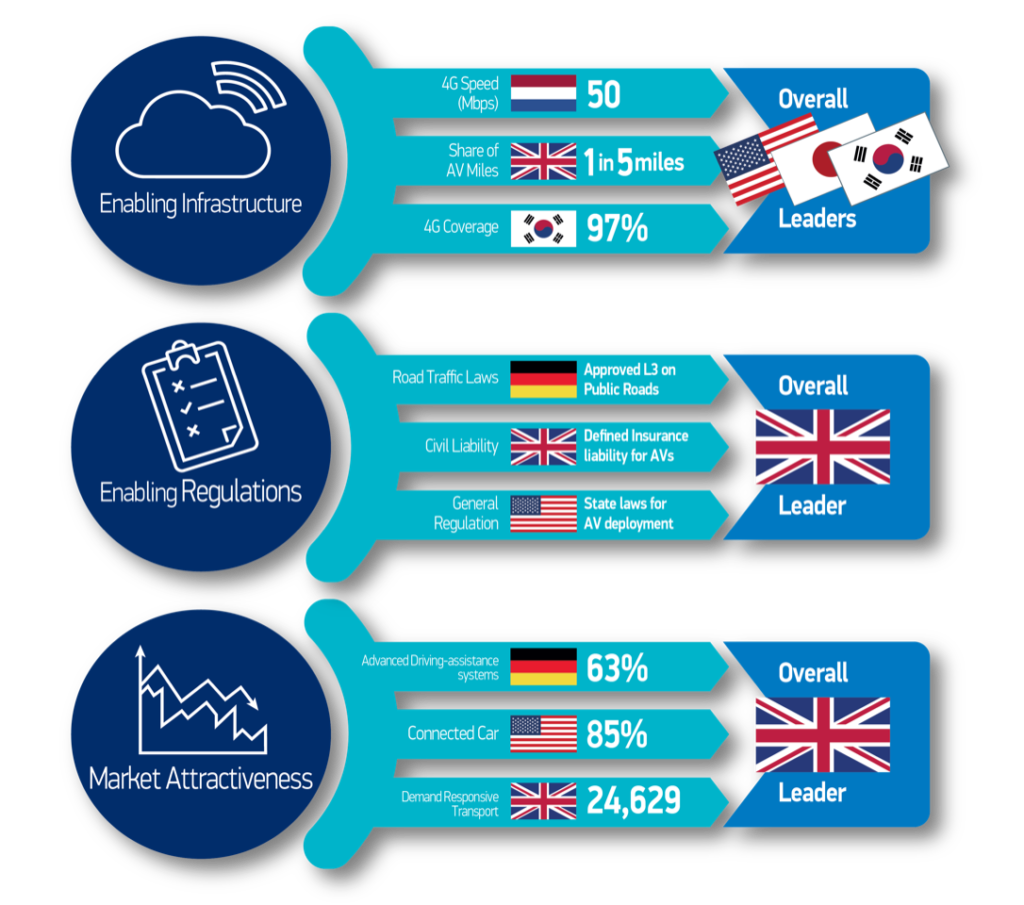 Connected and Autonomous Vehicles: Winning the Global Race to Market identifies three critical areas that will help CAV rollout and in which the UK has a significant advantage: supportive regulation, enabling infrastructure and an attractive market.

With the world’s first insurance legislation for autonomous vehicles already in place, the most comprehensive review of road transport underway and more miles across motorways, urban and rural roads able to be driven autonomously, the UK is already ahead of global rivals in its readiness to commercialise self-driving technology.

The report ranks the UK above other major automotive countries, including Germany, US, Japan and South Korea as a global destination for the mass rollout of CAVs.

To realise this potential, however, the conditions must be right, and sustained support from government will be vital – particularly if we are to meet its ambition to get autonomous vehicles on to UK roads in 2021.

The report’s key recommendations for government include updating road traffic laws, improving 4G coverage across all road networks, encouraging local authorities to work with industry to implement urban mobility services and influencing future harmonisation of international regulations to ensure these new vehicles can operate seamlessly between the UK and abroad. 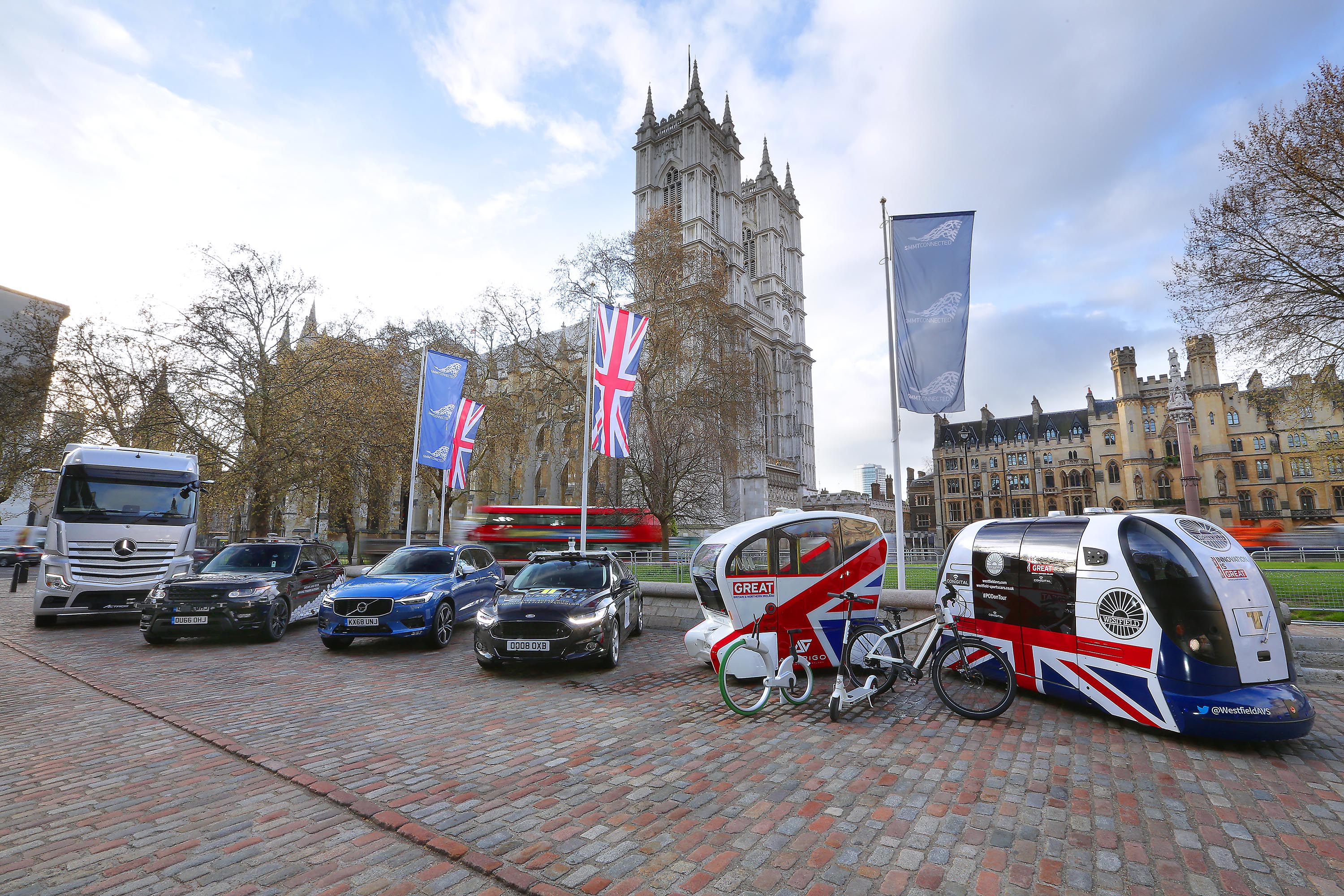 Crucially, however, the UK’s departure from the EU must be orderly with a deal that supports both the industry and technological collaboration, especially in data. A ‘no deal’ Brexit will result in lasting damage to the UK’s reputation as a politically stable destination for inward investment, putting the benefits identified in the report at risk.

A transport revolution stands before us as we move to self-driving cars and the UK is in pole position in this £62 billion race. Government and industry have already invested millions to lay the foundations, and the opportunities are dramatic – new jobs, economic growth and improvements across society. The UK’s potential is clear. We are ahead of many rival nations but to realise these benefits we must move fast.

Brexit has undermined our global reputation for political stability and it continues to devour valuable time and investment. We need the deadlock broken with ‘no deal’ categorically ruled out and a future relationship agreed that reflects the integrated nature of our industry and delivers frictionless trade.

The UK already has the essential building blocks – forward thinking legislation, advanced technology infrastructure, a highly skilled labour force, and a tech savvy customer base – to spearhead CAV deployment over the next decade.

However, it will require sustained and coordinated efforts by all key stakeholders, especially the government, to realise the significant annual economic benefits forecast for the UK from CAV deployment by 2030 and drive the vision of safe, convenient and accessible mobility for all.

Connected and Autonomous Vehicles: Winning the Global Race to Market, will be launched today at SMMT Connected 2019, the third automotive industry-led event to explore the future of mass transport and mobility. More than 450 leaders from across the automotive and tech industries, government and other stakeholders are expected to attend to discuss challenges and opportunities in future mobility innovation and deployment. They will hear from speakers including the Right Hon Greg Clark MP, Secretary of State for Business Energy and Industrial Strategy; Dr Andy Palmer CMG, President and Group CEO, Aston Martin Lagonda; and Agustín Martín, CEO, Toyota Connected Europe.