British car manufacturing output fell by more than a fifth in the first half of 2019, with a -15.2% decline in June marking the 13th consecutive month of negative growth, according to figures released today by the Society of Motor Manufacturers and Traders (SMMT).1 666,521 cars rolled off production lines in the first six months, a year-on-year loss of 168,052 units due largely to falling demand in key markets, including the UK, exacerbated by factory shutdowns pulled forward in anticipation of the March Brexit deadline.

In June, output for the UK rose by 2,791 units following an anomalous -47.2% decline in the same month last year when preparation for the new WLTP emissions test impacted volumes. The underlying trend, however, remains downward, with year-to-date production for the domestic market down -16.4%.

Meanwhile, the number of cars built for export fell by -19.8% in June and by -21.0% in the first half of the year, with just over half a million units shipped overseas given softening of key overseas markets and global trade tensions. Exports to the sector’s top global markets fell by double digits, with the US down -12.9%, China down -53.1%, Japan -10.5% and Turkey -93.0%. Demand in the UK’s biggest market, the EU, also fell, by -15.6%. However, the EU still accounts for 57% of all UK car exports – the highest first half dependence since 2016.2

The news comes as new SMMT research, also released today, reveals the substantial cost to industry of ‘no deal’ Brexit preparations. At least £330 million has already been spent by the sector on contingency plans.3 Most major UK manufacturers have tied up working capital stockpiling materials and components, securing warehousing capacity and investing in new logistics solutions, additional insurance and training in new customs procedures. Significantly, many manufacturers have moved annual plant shutdowns from the summer to April, a measure which cannot be repeated for the proposed October departure date.

Meanwhile, latest figures show inward investment into the sector effectively stopped in the first half of the year. In the period January-June, newly pledged investment was down more than 70% to £90 million, contrasting with the average annual investment figure of £2.7 billion over the previous seven years.4 While the welcome announcement by Jaguar Land Rover earlier this month was exceptional good news, this is something of an outlier as the vast majority of manufacturers have suspended plant and product spending in the UK amid ongoing uncertainty.

Today’s figures are the result of global instability compounded by ongoing fear of ‘no deal’. This fear is causing investment to stall, as hundreds of millions of pounds are diverted to Brexit cliff-edge mitigation – money that would be better spent tackling technological and environmental challenges.

The industry’s foundations are fundamentally strong, however, and we’re ready to work with the new government to build on these through the industrial strategy. We need an internationally competitive business environment to encourage more investment, more innovation and more growth. That starts with an ambitious Brexit deal that maintains frictionless trade and we look to the new administration to get a deal done quickly so manufacturers can get back to the business of building cars and helping deliver a brighter future for Britain.

Automotive manufacturing is one of the UK’s most important economic assets, delivering an annual £18.6 billion to the economy, supporting local communities and employing 168,000 people in high value jobs, with the average salary some 40% higher than the national average. The sector is also one of the UK’s most productive, with automotive output per job now worth some £100,900. Automotive remains the UK’s single biggest exporter of goods, trading with some 160 countries worldwide and accounting for more than 14% of total exports.5

This success is dependent on free and frictionless trade afforded by the EU single market and customs union. A ‘no deal’ Brexit would mean the immediate imposition of tariffs costing some £4.5 billion a year and an end to the seamless movement of goods.6 Any potential disruption at the border would throw Just-in-Time manufacturing into chaos, undermining the sector’s competitiveness and putting profitability and jobs at risk. 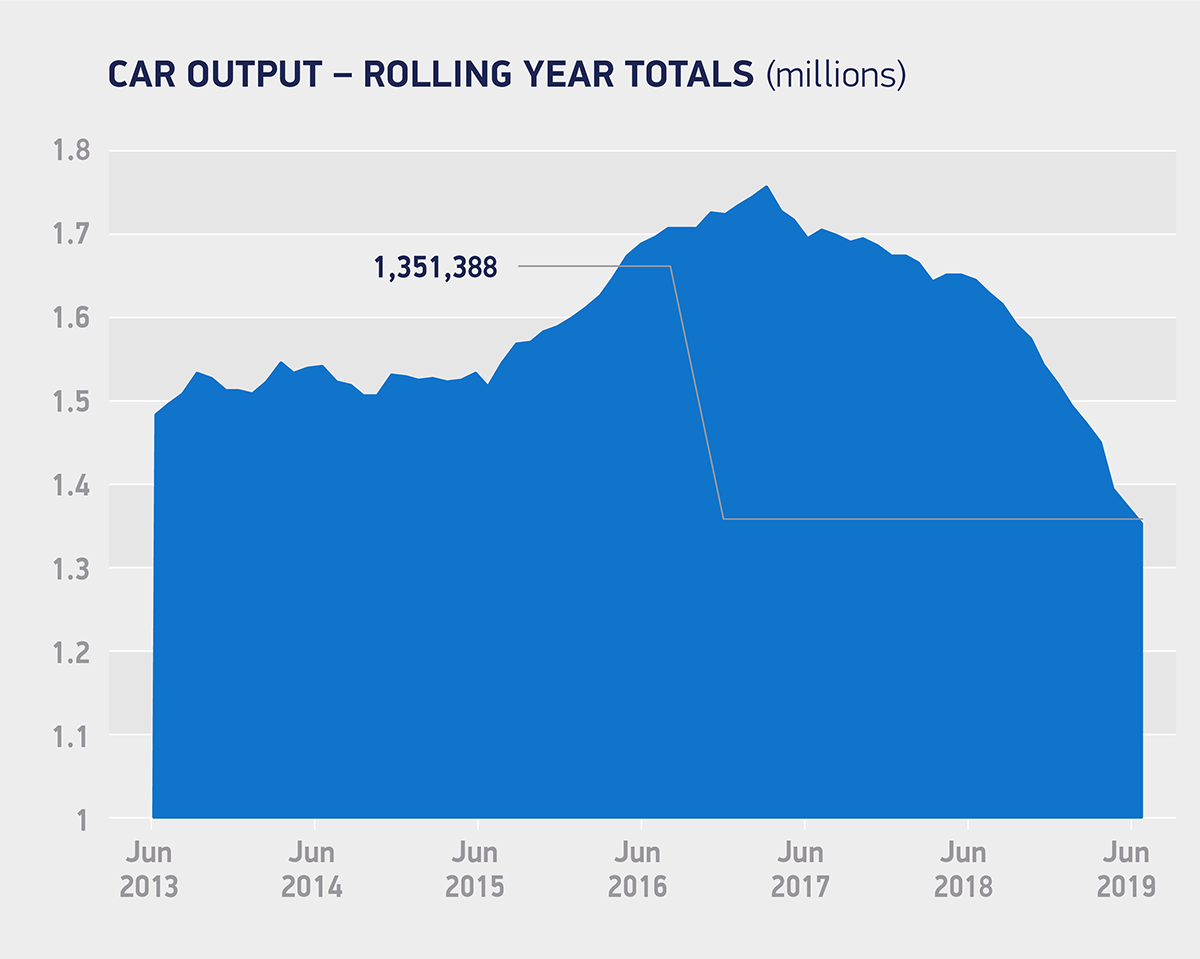 1: UK car output last rose in May 2018
2: Proportion of UK car exports destined for EU27 countries was last highest in H1 2016 (58.7%)
3: SMMT member research conducted H1 2019
4: SMMT calculations based on new, publically announced investment decisions in H1 2019 covering genuine commitments to fresh spend on new product, tooling, equipment or facilities
5: SMMT data
6: Based on the application of a 10% tariff on cars exported to and imported from the EU