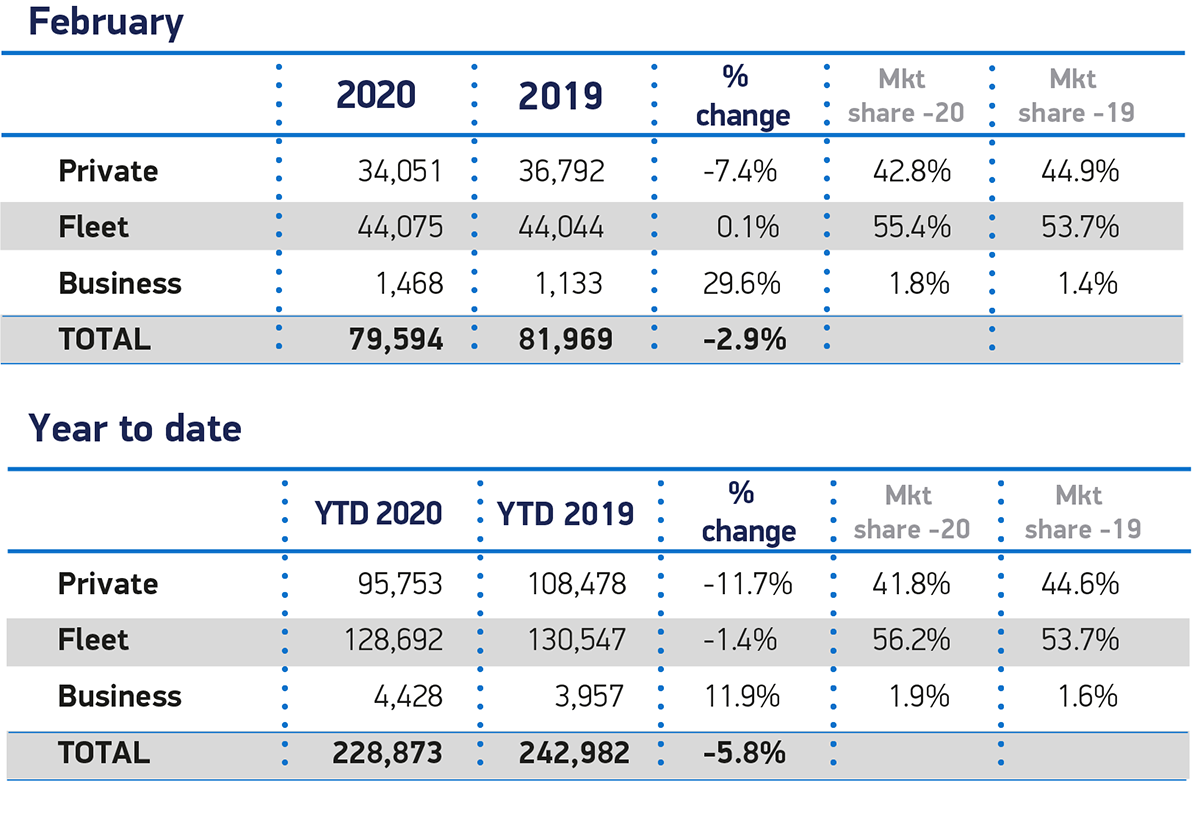 The UK new car market declined -2.9% in February, according to data published today by the Society of Motor Manufacturers and Traders (SMMT). 79,594 models were registered in the month, traditionally one of the year’s quietest ahead of the crucial March number plate change, with the decline driven primarily by weak consumer confidence and uncertainty over what fuel technology to buy. Registrations by private buyers were responsible for the bulk of the overall loss, down some -7.4% as 2,741 fewer people took delivery of new cars. Fleet demand, however, remained stable, up by 31 registrations. 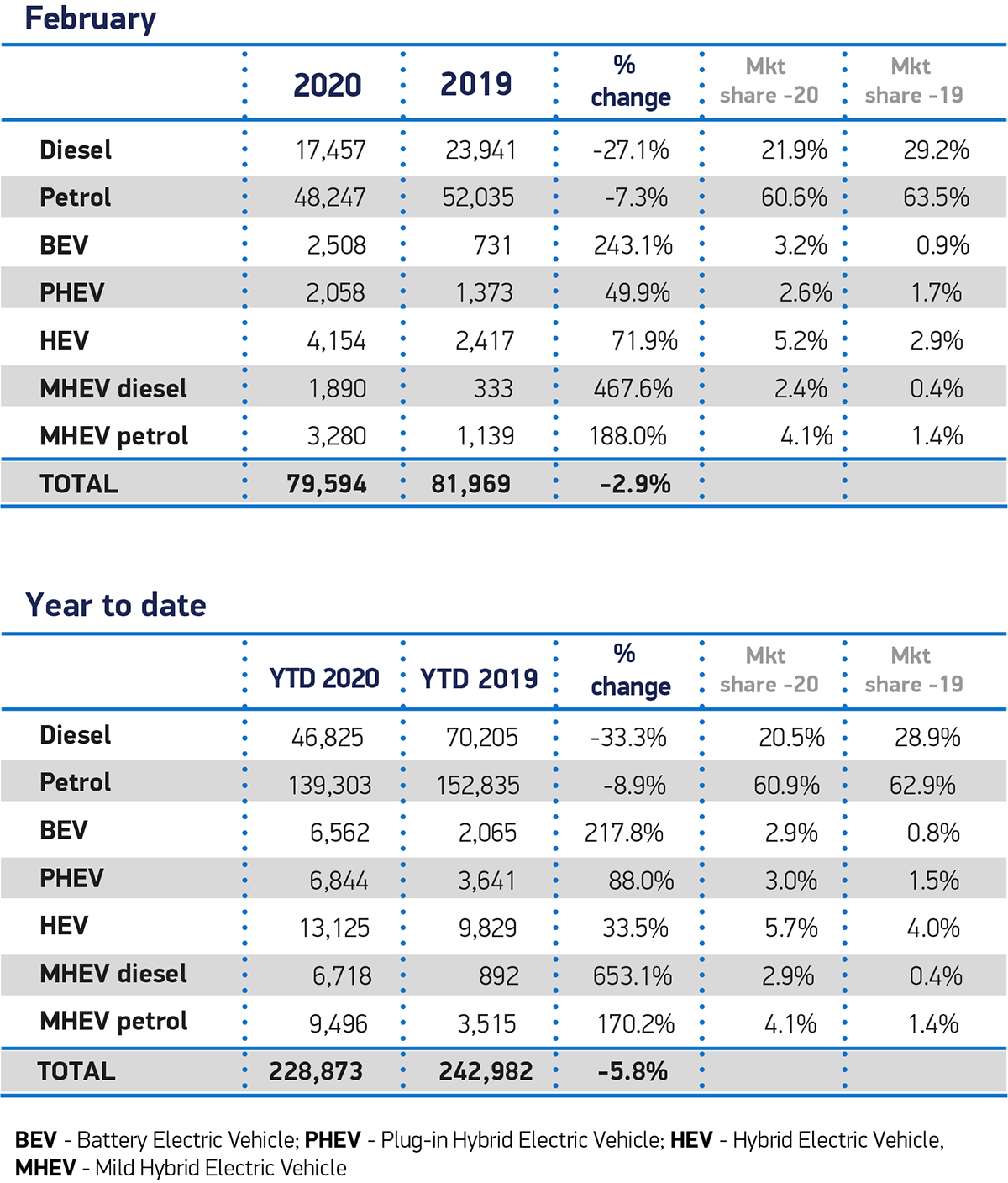 Demand for both diesel and petrol cars fell in the month, with registrations down -27.1% and -7.3% respectively, and diesel now accounting for just over a fifth of sales (21.9%). Hybrids (HEVs) recorded an uplift of 71.9% to 4,154 units, while registrations of zero emission capable cars also continued to enjoy growth, with battery electric vehicles (BEVs) rising more than three-fold to 2,508 units and plug-in hybrids (PHEVs) up 49.9% to 2,058. However, these vehicles still make up just 5.8% of the market; and BEVs only 3.2%, showing the scale of the challenge ahead.

The news comes as SMMT calls on the Chancellor to use next week’s Budget to announce bold new measures to make new-tech zero emission-capable cars, including plug-in hybrids, more affordable for mass market buyers. In 2020, manufacturers will bring more than 23 new battery electric and 10 plug-in hybrid electric cars to the UK to add to the more than 65 already on sale, but take up of these new models depends on affordability and the provision of adequate charging infrastructure. 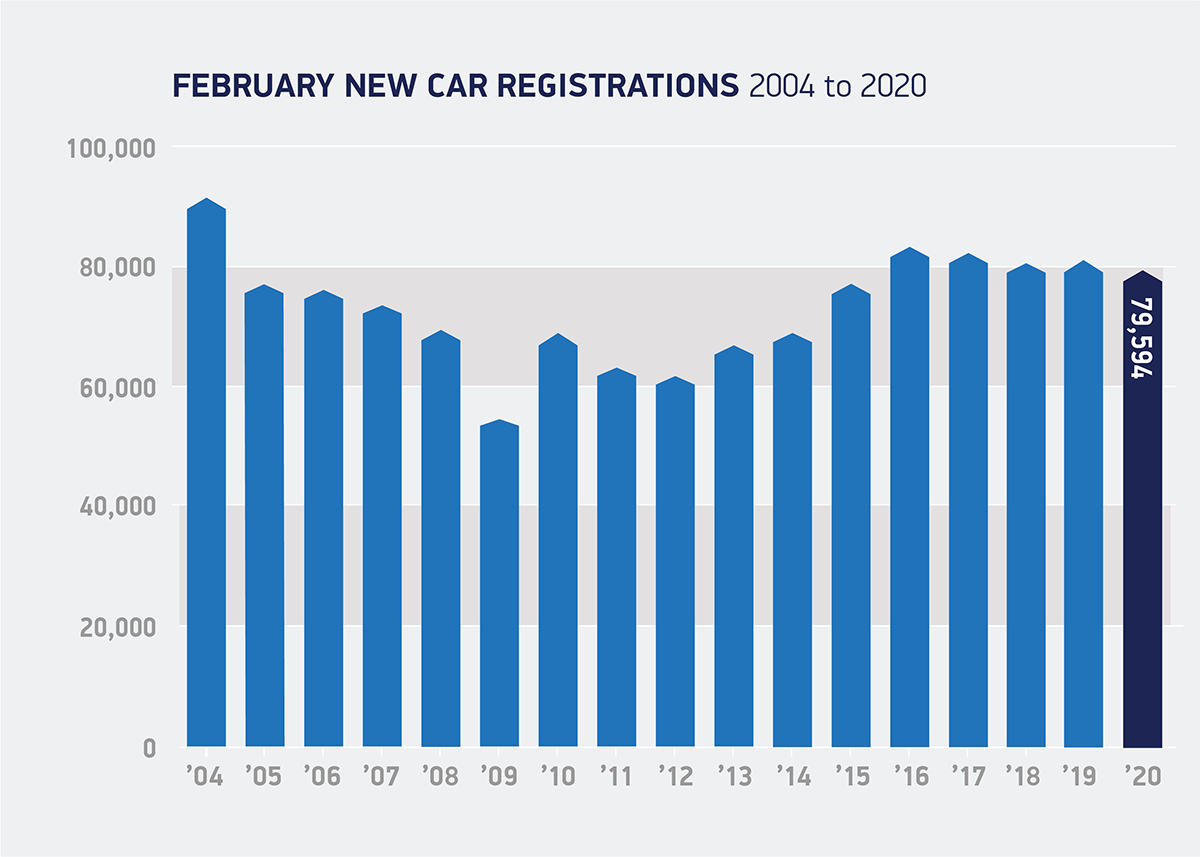 SMMT is calling for the removal of VAT from all new battery electric, plug-in hybrid electric and hydrogen fuel cell electric cars – a move which would cut the purchase price of an average family battery electric run-around by some £5,600. Combined with additional measures, including the long term continuation of the critical plug-in car grant at current levels and its reintroduction for plug-in hybrids; and exemption from VED and insurance premium tax, the upfront cost of these vehicles could be cut by as much as £10,000, helping to deliver greater cost parity with conventionally powered vehicles and making them a viable option for many more buyers.

Based on current market forecasts, SMMT calculations show that the removal of VAT could increase sales of battery electric cars alone to just under one million between now and 2024, resulting in an additional CO2 saving of 1.2 million tonnes over this period.1 However, this must be part of a comprehensive package of incentives implemented alongside substantial investment in charging infrastructure to ensure a sustainable transition for consumers and businesses of all incomes, regions and lifestyles. Only by addressing both these issues can the government’s accelerated ambitions for zero emission vehicle sales be met.

Another month of decline for the new car market is especially concerning at a time when fleet renewal is so important in the fight against climate change. Next week’s Budget is the Chancellor’s opportunity to reverse this trend by restoring confidence to the market and showing that government is serious about delivering on its environmental ambitions. Industry has invested in the technology, with a huge influx of new zero- and ultra-low emission models coming to market in 2020, and we now need government to match this with a comprehensive package of incentives and infrastructure spending to accelerate demand.

To drive the transition to zero emission motoring, we need carrots, not sticks – as the evidence shows, talk of bans and penalties only means people hang on to their older, more polluting vehicles for longer. It’s time for a change of approach, which means encouraging the consumer to invest in the cleanest new car that best suits their needs. If that is to be electric, government must take bold action to make these vehicles more affordable and as convenient to recharge as their petrol and diesel equivalents are to refuel.

Environmental issues must be addressed now which means encouraging fleet renewal of all technologies, whether they be fully electric, hydrogen, hybrid or modern, efficient petrol and diesel engine cars, because these vehicles can deliver air quality and climate change improvements now. Until electric vehicle affordability and charging infrastructure gaps are addressed, these vehicles will remain a minority.

1. SMMT calculations indicate that removing VAT could deliver an uplift of 50% in BEV sales to 935,000 units in the five years to 2024, resulting in a total 3.6 tonne CO2 saving over the period