UK car production down -41.4% in October

UK car production declined -41.4% in October as factories turned out 64,729 units, according to the latest figures released today by the Society of Motor Manufacturers and Traders (SMMT). It was the fourth straight month of decline and the weakest October since 1956 as firms grappled with the global shortage of semiconductors which led to production stoppages. The weak output totals compared to last year are exacerbated by the closure of a UK car plant at the end of July, a deficit that will impact figures for a year.1

More positively, production of the latest battery electric (BEV), plug-in hybrid (PHEV) and hybrid (HEV) vehicles comprised 30.9% of all cars made in October. BEV manufacturing rose 17.5% to 8,454 units, meaning that, so far this year, UK car makers have produced more than 50,000 zero emission vehicles, exceeding the total built in the whole of the pre-pandemic 2019.2

Production for domestic and overseas markets fell by double digits in the months, down -37.9% and -42.1% respectively. Although more than eight-in-ten of all cars made were shipped abroad, most of these (60%) went to the EU, emphasising the importance of the deal struck last year which allows automotive trade with Europe to be tariff-free. Overall, however, shipments to the EU fell by a relatively modest -29.2%, whilst those to Japan were down -57.1% and to the US down -67.0%.

The monthly performance means that year-to-date output is below 2020, down -2.9% to 721,505 units, underscoring the impact semiconductor shortages and structural changes are having, even compared to a year in which UK automotive production was badly affected by factory stoppages arising from the first lockdowns. 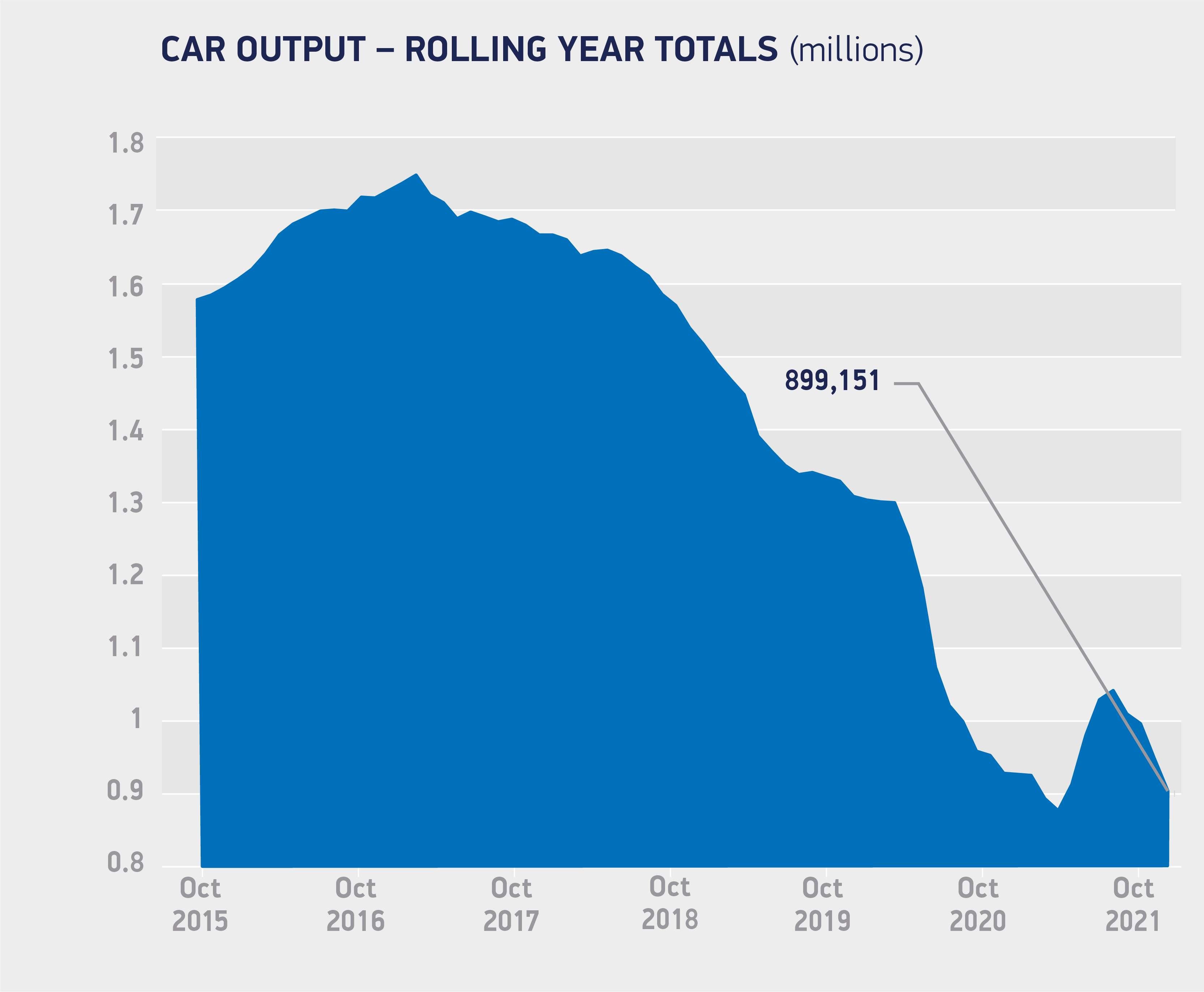 The latest independent production outlook report forecasts UK car and light commercial vehicle (LCV) production to be below one million for the second consecutive year, but to then recover to over one million in 2022, with the potential to reach 1.2 million in 2024 if competitive conditions prevail.3

These figures are extremely worrying and show how badly the global semiconductor shortage is hitting UK car manufacturers and their suppliers. Britain’s automotive sector is resilient but with Covid resurgent across some of our largest markets and global supply chains stretched and even breaking, the immediate challenges in keeping the industry operational are immense. Government can help the industry with measures to boost competitiveness in line with global rivals, notably in tackling high energy costs, supporting employment and training, and helping businesses whose cashflow is under pressure from these historically poor production numbers.