The UK new car market declined for the second consecutive year in 2018, following six years of growth. The market fell 6.8% to 2.37 million units registered. Despite the overall decline, the market remained the second biggest in the EU, behind Germany. Demand fell across all vehicle segments, bar the dual purpose category, which grew by 9.1%. This segment represents 21.2% of the overall market. Despite registrations of Superminis and Lower Medium cars falling by 2.5% and 9.4% respectively, these smaller vehicles remain the most popular, with a combined 58.7% market share. 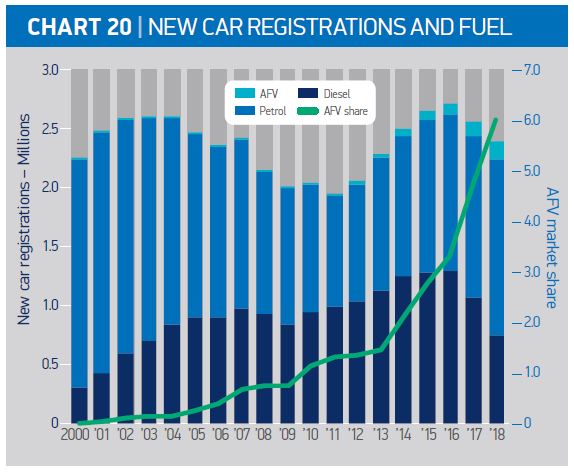 The AFV market continued to see growth, with just over 141,000 units registered in 2018, equating to a 20.9% uplift on 2017. This represents the sector’s highest annual market share of 6%. Petrol electric hybrids remained the most popular, up 21.3% to 81,156 units. Plug-in hybrids also recorded a 24.9% uplift over the year. However, the removal of the Plug-in Car Grant for plug-in hybrids has meant a decline in this part of the market in the last quarter of 2018. Battery electric cars grew 13.8% in the year but, with just 15,474 registered, they still make up only 0.7% of the market.

While petrol registrations grew by 8.7%, diesel registrations declined by 29.6%, with the volume loss equivalent to some 180% of the overall market’s decline. Anti-diesel rhetoric and fiscal measures have resulted in a slowdown in fleet renewal for this segment.