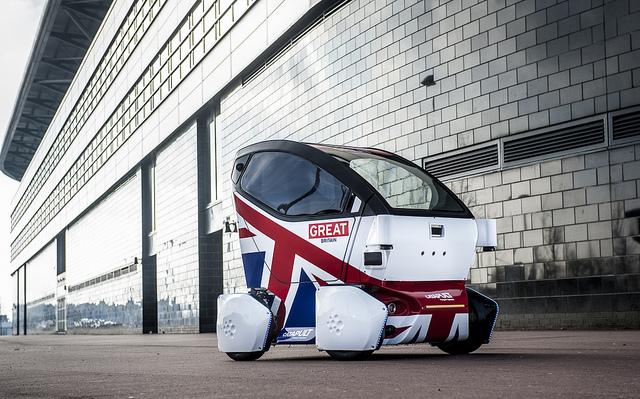 An innovative project to bring fully-automated, driverless vehicles to the streets of Milton Keynes is the winner of the 2015 Society of Motor Manufacturers and Traders (SMMT) Automotive Award for Innovation, announced at the 99th SMMT Annual Dinner in London last night.

The LUTZ Pathfinder project, from the Transport Systems Catapult, has developed pioneering two-seater electric ‘pods’ that will provide public transport along pedestrian routes, for example between train stations and city centres. This real-world trial will significantly boost the UK’s international reputation for R&D while bringing fully autonomous vehicles one step closer.

Mike Hawes, SMMT Chief Executive, said, “The quality of entries was extremely high and judging was tough but we were agreed that Transport Systems Catapult should be recognised for its work in helping put Britain at the forefront of connected and autonomous vehicle development. Technologies such as these represent a huge area of growth for the UK’s automotive industry, with the potential to deliver 300,000 new jobs within the next 15 years. The LUTZ Pathfinder trial is not only an innovation in itself but will provide invaluable data, experience and learning for the whole sector.”

Steve Yianni, Transport Systems Catapult CEO, said, “This is a massive honour for the Transport Systems Catapult (TSC) and for our project partners at Milton Keynes Council, RDM and Oxford Mobile Robotics Group. The TSC only began its operations in 2013, so to have already won such a prestigious national innovation award is a great tribute to the ground-breaking work that our people are carrying out together with our partners in the field of Intelligent Mobility.”

Now in its sixth year, the Award – in partnership with the Advanced Propulsion Centre, sponsored by GKN, and supported by The Times – rewards UK-developed technologies that have the potential to benefit the UK’s automotive industry. In 2014 alone, £2.4 billion was invested by UK automotive in R&D, an increasingly important measure of the industry’s competitiveness – and a key attraction for inward investment. Research commissioned earlier this year by SMMT found the development of connected and autonomous vehicles could deliver huge benefits, with a £51 billion boost to the UK economy and a reduction in serious road traffic accidents of more than 25,000 a year by 2030. Crucially, the KPMG report for SMMT1 also forecast the UK as a global leader in the production of this next generation of vehicles.

This year the Award also recognised two highly-commended entries demonstrating exemplary R&D technologies. These innovations came from extreme ends of the size spectrum: a fuel-saving chassis for 12-tonne vehicles developed by Leyland Trucks; and Oxford Advanced Surfaces’ molecular bonding agent which will assist the introduction of more advanced and lightweight materials in the manufacturing process.

Ian Constance, CEO of the Advanced Propulsion Centre, said, “Congratulations to the Transport Systems Catapult and its partners for delivering a truly innovative project – a worthy winner amid some very strong competition. The standard of this year’s entries has been remarkable, and together they showcase advanced engineering and innovation in the UK.”

Rob Rickell, President of Group Technology, GKN plc, said, “Congratulations to Transport Systems Catapult for the LUTZ Pathfinder Pods project. Automated and connected vehicles offer an exciting future, enabling more efficient movement of people and goods, as well as improving road safety. It is pleasing to see a UK firm playing an active role in the evolution of the automobile, and this project is an important part of the journey towards fully automated cars on the road.”