Bus constructor Optare has confirmed that it will be trialling an electric version of its Transport for London (TfL) specification Metrodecker following successful trials of a Euro VI diesel-powered model in the capital.

The pre-production 10.5m Metrodecker demonstrator completed the evaluation with Go-Ahead London, on routes from the operator’s Bexleyheath bus garage. 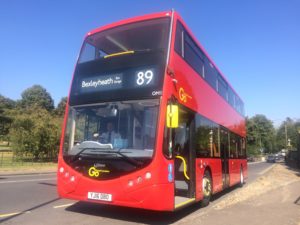 Now, the company has committed to trialling its fully electric Metrodecker – previewed at EuroBus Expo last November – on Go-Ahead’s Route 36, starting later in the year.

Robert Drewery, Commercial Director, Optare said, “We are delighted with the performance of the Metrodecker in the capital and the positive feedback from Go-Ahead London and their customers. The vehicle will remain with Go-Ahead London for a little longer, moving to New Cross Garage, where drivers and engineers will undergo familiarity training in preparation for the Metrodecker EV prototype Route 36 trial in the summer.”

Richard Harrington, Engineering Director for Go-Ahead London, added, “Go-Ahead is committed to taking care of its customers changing needs, today, tomorrow and always, so we were delighted to be able to put the Metrodecker through its paces in London. We were pleased with the Metrodecker’s overall performance with regards to reliability, serviceability and fuel efficiency. We received very positive feedback from the 95 different drivers who drove the vehicle in service, with the majority reporting that it was a great product with a clear view of the road ahead. Our customers were also very complimentary of the vehicle’s comfort and design.”

It is available in two lengths. The two door TfL specification measures 10.5m and the single door provincial specification at 11.1m.