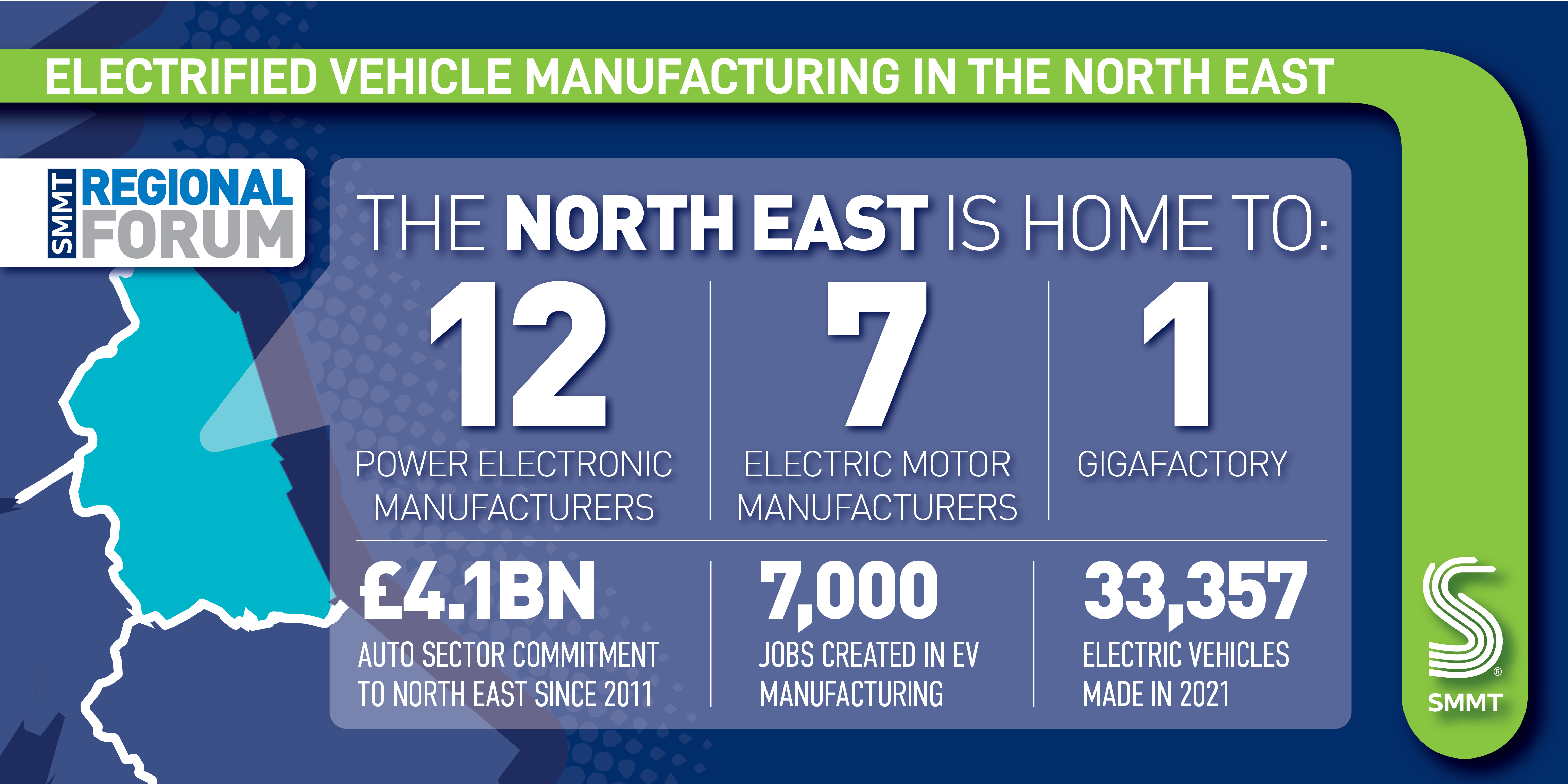 Bosses from some of the UK’s biggest electric vehicle, battery and component manufacturers will gather in Sunderland next month to discuss how best to secure the future of the automotive industry in the North East, by delivering investment, growth and jobs for the region. They will be joined by hundreds of local businesses at the Society of Motor Manufacturers and Traders (SMMT) Regional Forum at Sunderland’s Stadium of Light.

Recent analysis by SMMT has revealed how the automotive industry has committed £4.1 billion to the North East during Britain’s first ‘electric decade’. That represents around a quarter of the total sum invested nationwide by the sector since 2011, proving how critical the region is to the UK’s ambitions to ramp up electric vehicle and battery production on the Road to Zero.

The North East is well-known as an automotive manufacturing centre of excellence, home to one of the UK’s largest car makers and the first battery gigafactory in the UK, with investment in the area starting in 2011 with a £420 million commitment in Sunderland to build Britain’s first mass-produced battery electric car.

At least 7,000 highly-skilled, well paid jobs have since been created to produce electric vehicles and technology in the region. These workers helped turn out 47.5% (33,537 units) of all the battery electric vehicles (BEVs) made in the UK last year, with most of these zero-emission cars – critical products in the fight to address air quality and tackle climate change – built for export to global markets.

In addition to the recently announced expansion of the existing gigafactory in Sunderland, the area is home to 12 power electronic manufacturers, seven electric motor manufacturers, and is the base for the UK’s next planned gigafactory at Blyth.

Industry leaders, including senior executives from major investors Nissan and Britishvolt, will be joined by senior management from both Advanced Electric Machines, which designs and builds electric motor technologies, and Adient, a producer of car seats committed to sustainability. All the speakers will be looking to identify the best ways to exploit the region’s undoubted competitive advantage to drive further investment and growth.

The North East is an automotive manufacturing hub for the UK, making products that are sought after across the globe while sustaining thousands of well-paid, skilled jobs. The region has seen more investment into electric vehicle and battery production than any other in the UK, highlighting its importance to the sector, the economy and the decarbonisation of road transport. But no region can rest on its laurels, so it is important that its competitive advantage is retained and further investment secured not just to create new jobs and growth but to bolster the UK’s shift to net zero.

It’s fantastic that the SMMT have chosen the North East to hold this important event. It will be a great opportunity to discuss the future for the industry, as well as Nissan’s own exciting electrification plans, which include EV36Zero – the world-first EV manufacturing ecosystem that we are building here in Sunderland.

The North East of England is rapidly building out as an anchor of UK battery manufacturing excellence. This is a truly exciting, and historic, era for the region, and the country. With easy access to renewable energy, an imperative for producing truly sustainable battery cells, the region is perfectly positioned to put the UK firmly on the global battery map. Couple all of this with the excellent academia in the region, and the establishment of the North East Battery Alliance, and it’s clear why this part of the country is gaining the reputation that it is. The region’s five universities are collaborating to form working groups reviewing all aspects of battery production – from raw materials to recycling, to strengthen the region’s research offering in this space. Britishvolt is proud to be part of the North East energy transition narrative. Not all batteries are created equal.

The success that we have achieved so far would not have been possible without the scientific, engineering and manufacturing knowledge prevalent in the North East. We’re proud that our uniquely sustainable electric motor technology is already bringing the North East recognition in the global EV sector, and we’re looking forward to scaling our offering while keeping the region at the heart of our business.

Representing more than 800 automotive companies in the UK across production, importation, supply chain and aftermarket, SMMT provides a forum for members to voice their views on issues affecting them, helping firms grow their businesses to become more profitable, competitive and sustainable.

SMMT holds major events throughout the year, including the International Automotive Summit, Electrified, Open Forum, Meet the Buyer and Regional Forums, which take place across different regions in the UK. Members benefit from free access to events and enjoy other exclusive benefits, including access to data, webinars and a range of reports and intelligence not available elsewhere.

Businesses can see the full event line-up and register their interest to attend SMMT Regional Forum North East via the SMMT website – https://www.smmt.co.uk/events/regional-events/.