One of the biggest names in global deliveries, FedEx, has stated that automated technology and self-driving vans will play a major part in its future.

According to FedEx Chief Information Officer, Rob Carter, automated technology and artificial intelligence will completely transform the delivery business. Carter is responsible for setting the technology agenda across FedEx’s various companies, which operate in 220 countries. 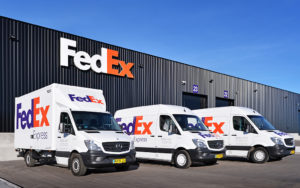 FedEx is already working with US technology company Peloton, whose semi-autonomous systems electronically link trucks into platoons. The software, which uses wireless vehicle-to-vehicle communication to enable the driver of a lead truck to control the acceleration and braking of a truck following behind, is designed to reduce wind resistance and save fuel. The technology is considered a significant step toward fully autonomous trucks, and Peloton has said it will release it in late 2017.

In an interview with the US publication Technology Review, Carter revealed that FedEx is also in the early stages of developing an ‘Alexa app’. The artificial intelligence app, developed by Amazon, enables consumers to initiate shipments from FedEx by simply talking to a smart device using commands such as “Alexa, prepare a shipment.”

Carter says FedEx is also “very much interested in” completely autonomous trucking and has partnered with several vehicle makers that specialise in such technology, including Daimler and its Freightliner truck division and Volvo.

One of the partners – Daimler – is also the parent company of Mercedes-Benz vans, which demonstrated its proposals to use autonomous vans and robots for urban deliveries at last month’s Consumer Electronic Show (CES) in Las Vegas. The proposed solution would use the company’s driverless vans to navigate to designated delivery areas for commercial customers and launch drones from their roofs to deliver packages, or pre-loaded and programmed robots from inside the load bay.

“We must recognise that due to changes in vehicle technologies, fuel taxes cannot alone fund the system,” he said. “Alternative vehicles such as electric and natural gas need to also pay a highway user fee. This can now be easily done through technology. Consequently, FedEx supports a broad mix of revenue sources in order to avoid over-reliance on a single option.”