Harrogate to get electric bus fleet

The Yorkshire spa town of Harrogate is to become the first in the UK to adopt an electric bus fleet with opportunity charging, following the announcement that a fleet of single decker Volvo 7900E Electromobility buses will go into service in the town next year. 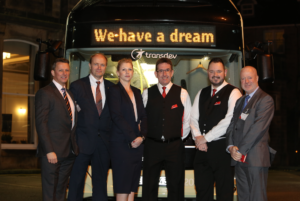 The £2.25 million commitment to renew the town’s bus fleet is integral to the vision of The Harrogate Bus Company, owned by Transdev Blazefield, to significantly reduce town centre emissions and move towards a low emissions strategy for the area, in conjunction with Harrogate Borough Council. The project is part funded by the government’s Low Emission Bus Scheme.

When the vehicles enter service in 2018, the project will be the first of its kind in the UK introducing full electric vehicles using ‘opportunity charging’ via the European OPPCharge agreement and infrastructure, which can also be used by various vehicle types.

Opportunity charging takes place via a specialist overhead mast, which connects to the bus via a pantograph.  Charging is fully automated and takes between three and six minutes to complete.

Phil Owen, Commercial Sales Director for Volvo Bus UK & Ireland, said, “The arrival of the 7900E is extremely exciting not only for Volvo Bus and Transdev Blazefield, but also for the people and town of Harrogate, which is now set to lead the way with the adoption of opportunity-charged full electric vehicles in the UK.”

Volvo marked the agreement by bringing a demonstrator bus to the town to mark the announcement.

“This particular concept vehicle has been fully operational on Line 55 in Gothenburg since 2015, so the technology and associated infrastructure are already very well tried and tested,” added Owen.” In addition to being completely emission free, the bus is also extremely quiet, which will make a big difference to noise levels as well as air quality for residents and passengers in Harrogate town centre.”

Alex Hornby, CEO of The Harrogate Bus Company, said, “This is about making Harrogate a UK leader in clean, green public transport. When we introduce our new electric buses next year, it’ll be the first time that this next generation technology will be in use anywhere in the UK.”