Feature: How Virtual Reality is shaping the physical world of commercial vehicles

Virtual Reality (VR) and commercial vehicles don’t sound like natural companions, but prepare to be surprised…

The technology, which, put simply, involves strapping on a headset and immersing yourself in digital surroundings, has recently wheeled its way into the CV sector.

US truck manufacturer, Mack, launched virtual test drives in 2016. The 3D, 360-degree setup gives the viewer a cab-side look at one of the company’s models in action, the idea being that prospective customers will be able to experience the vehicle’s key features, without having to physically get behind the wheel. Of course, you could watch the simulations on YouTube, but the firm says they’re best viewed using a Google cardboard headset – a simple visor that folds around your face and attaches to a compatible smartphone, with Mack’s VR app. 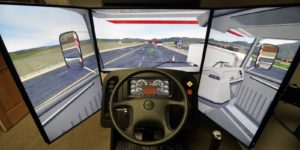 There’s plenty more to the technology than marketing, though. Logistics giant UPS began using VR at its training facility in Atlanta, Georgia, in September, with a simulation designed to train drivers on safety techniques. 4,000 drivers are expected to have completed the programme by the end of next year.

The idea behind VR training is that, with good quality equipment , such as immersive headsets with a highly accurate simulator, it provides a cheaper, safer and more accessible way of getting time behind the wheel with zero real-world consequences.

Dominic Dobson, Founder and COO of VR Motion, based in Oregon, explains: “There is no exact substitute for real miles. What we’re offering is a less costly way of getting nearly the same thing with 100% safety. We can put someone in simulator for 100 hours, and it’s $10 in operating costs – it’s a little bit of electricity. If you want to train somebody for 100 hours in a vehicle, you have gas, tyres, maintenance, wear and tear – and the risk of something happening.”

In August 2016, VR Motion launched VR programmes for a range of applications, including the military and emergency vehicle sectors, in addition to training racing drivers.

“The military often drive on dirt roads or poorly maintained asphalt, all year-round, in big vehicles like HumVees, and they have a bad accident rate,” says Dobson, “typically it’s 18 or 19-year-olds hat have very little experience of driving. Maybe they’ve never driven [a] manual, or a big, heavy vehicle like a HumVee – and in some cases, they [join] the military having never driven a vehicle.”

“What we do is build an environment that is identical to a particularly bad stretch of road. Then we build the vehicle to match, as closely as we can, what they’re driving – not just visually, but also dynamically. What happens in an immersive VR environment is that they retain what they learn between 30 and 70% better than they would using a traditional simulator, which is looking at a flat 2D screen. VR has the ability to build muscle memory and leads to higher rates of retention.” 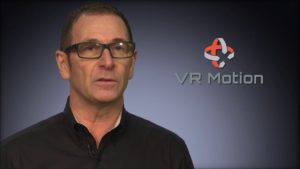 In the UK, VR is up and coming, breaking into a number of sectors, including transport. The Transport Research Laboratory (TRL) initially dipped its toe into VR with the intention of laser scanning and recreating accident scenes. TRL found that it could use more or less the same technology to replicate a driver’s vision from inside a vehicle –  a timely issue, given London’s proposed Direct Vision Standards for HGVs.

“We wanted to have a scientifically viable tool; an accurate representation of reality, not an approximate one,” says Ceki Erginbas, TRL’s Senior Technical Consultant for roadside safety, who worked on the project earlier this year, “we looked at the parameters that affect your eye position in a vehicle from the ground up: the pressure of tyres, the set-up of the suspension, the floor of the cab, and then, your seating position adjustments, and then the physical properties of your body; some people are taller, some people are shorter. All these things basically add up to x y z coordinates of your eyes.

“We worked with Volvo Trucks, who sent us technical drawings and provided us with seats and a steering wheel from a specific vehicle. What we have done is created a rig where we can replicate all the seating and steering wheel positions available in the actual vehicle.”

The only variable for which the rig cannot account is height and shape of the person behind the wheel, but that’s where the simulator comes into its own: “Once everything is set up, we measure the position of your eyes relative to the normal point in the truck, then update our model within [the simulator] so the cameras are located exactly where your [the driver’s] eyes are,” adds Erginbas, “as we run the simulation, we can move your seat around and make adjustments.

“To test that this thing works, we were also provided with access to the physical truck; so we devised an experiment. We created a grid on the floor around the actual vehicle, with one guy holding an adjustable pole on each spot on the grid. We had two people sitting in six different seating positions; for each position, one guy in front [of the vehicle] walked around to every point, then adjusted the height to the point where the pole vanished from vision for that seating position. We recorded the height, then went onto the next point. What this gave us was a very good idea about where the [driver’s] vision disappears.” 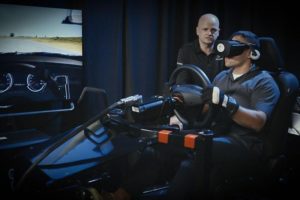 The experiment showed that the simulator exactly mirrored a driver’s vision from inside the cab of the physical truck, the applications for which are huge. Erginbas says the system can be used to establish the view from a vehicle’s cabin prior to final design and production, but also by local authorities to redesign road layouts or even to educate cyclists about lorry drivers’ blind spots.

“I think it was a Norwegian public authority, where they took 20 cyclists and hid them in the blind spot of a truck, then made another cyclist sit in the driver’s seat. They came out of the truck and said ‘there are still 20 cyclists in my blind spot. If I knew, I would be more careful’. Now, why don’t we take that experiment to everyone? We could make a cardboard version of this; it’s not exactly the same, but it’s more accessible and you could use it as an education tool to show these scenarios to different people, without the actual hassle of the truck, the environment, the physical tests.”