The UK new car market declined in 2017, with annual registrations falling for the first time in six years, according to figures published today by the Society of Motor Manufacturers and Traders (SMMT). A -14.4% decline in December marked the ninth consecutive month of negative growth, resulting in a final annual tally of 2,540,617 units, a fall of -5.7%, but still the third highest level in a decade.

The most popular vehicle choices were, once again, superminis, small family cars and SUVs (dual purpose), with the latter the only segment to grow demand in 2017. In fact, one in every five new cars sold in the UK is now dual purpose, up from one in 10 five years ago.1 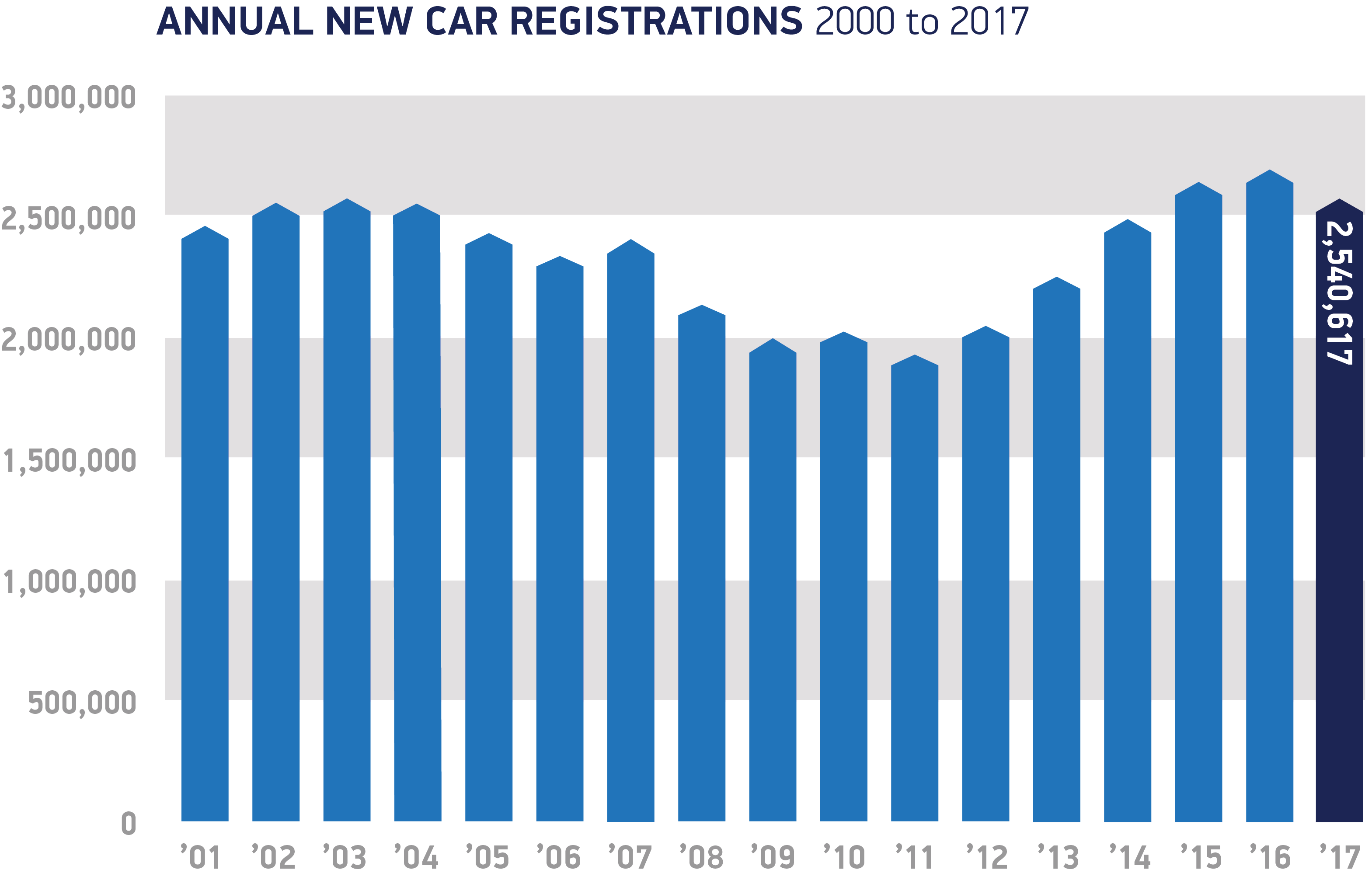 There was good news for the alternatively fuelled vehicle market, which grew 34.8%. A record number of hybrid, plug-in hybrid, battery electric and hydrogen fuel cell cars were registered – resulting in the sector’s highest-ever annual market share of 4.7%. UK consumers buy more plug in cars than anywhere else in Europe and demand grew by a quarter in 2017 – making Britain a key market for these vehicles.2

Demand for petrol cars also rose in the year, but by a more modest 2.7%. However, this was not enough to offset a -17.1% decline in diesel registrations – with anti-diesel rhetoric and the potential for tax hikes causing buyers to hesitate. However, these cars remain the right choice for many motorists – especially those who travel longer distances – with lower CO2, better fuel economy and, with these newer vehicles, dramatically reduced air quality emissions.

Latest calculations by SMMT highlight the money saving benefits of diesel cars, with drivers of diesel-powered D-Segment family vehicles, SUVs and executive cars saving an average of between £300 and £400 a year on their fuel bills. Across all body types, the average is £132 a year – equivalent to an average household’s quarterly electricity budget.3

The decline in the new car market is concerning but it’s important to remember demand remains at historically high levels. More than 2.5 million people drove away in a new car last year, benefitting from the latest, safest, cleanest and most fuel efficient technology.

Falling business and consumer confidence is undoubtedly taking a toll, however, and confusing anti-diesel messages have caused many to hesitate before buying a new low emission diesel car. Keeping older vehicles on the road will not only mean higher running costs but will hold back progress towards our environmental goals. Consumers should be encouraged to buy the right car for their lifestyle and driving needs irrespective of fuel type – whether that be petrol, electric, hybrid or diesel as it could save them money.

2017 has undoubtedly been a very volatile year and the lacklustre economic growth means that we expect a further weakening in the market for 2018. The upside for consumers, however, is some very, very competitive deals.

Despite the overall decline, new car registrations remain high, with the market still the second biggest in the EU, behind Germany. It is also one of the most diverse, with consumers able to choose from some 350 different models available in fuel types and body styles to suit all lifestyles – and on attractive finance terms.4 Meanwhile, 60 new models5 boasting exciting next generation technology – from systems that take over the driving in traffic jams, to those that detect potential collisions with pedestrians in day and night-time driving – are set to make showroom debuts in 2018.