Feature: How RFID technology is smartening up CV tyres

It may sound like something from a sci-fi movie, but monitoring truck and van tyres via radio frequency is bringing improved safety to our roads, in yet another example of how the CV Sector is using telematics to innovate. 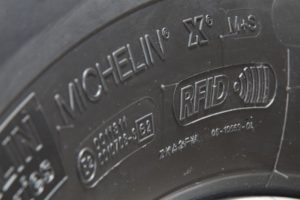 Radio-frequency identification (RFID) on its own is not a new phenomenon. The technology originated in the late 1940s and comprises a minuscule electromagnetic chip or tag, which can be read by a scanner. Prolific across many industries, the systems can be found embedded in livestock and pets as a means of identification, as security tags in shops and even in your passport, among other applications.

The automotive industry is no stranger to it, as plenty of manufacturers have used RFID in the production process, typically for the likes of stock checking. Mercedes, for example, has employed the technology in a particularly granular fashion in its Ludwigsfelde plant near Berlin, where the systems track components such as door mirrors and seats before they make it onto the latest Sprinter van.

Tyre manufacturers have applied similar tactics for some time, using the tags to keep track of stock in production facilities. However, the industry has begun examining other uses for RFID, including fitting the tags directly to commercial vehicle tyres. The practice is currently in its early stages, but the intention, initially at least, is to allow OEMs to track tyres throughout their life cycle.

Michelin’s US arm, for example, announced in February 2017 that it would fit RFID tags to all truck tyres and retreads. At the time, the company said the tags simply included a uniquely identifiable code for each tyre, but it planned to add facilities to gather additional data, such as information about servicing and whether or not the tyre has ever been removed, all of which would eventually be available to fleet customers, giving them a good idea of the rubber’s history and fitness for purpose.

Karl Naylor, UK country manager at ‎Apollo Vredestein, explains how the technology can be applied to the commercial vehicle sector. “We’re starting to see the first green shoots coming into commercial tyres where RFID chips are being used,” he said. “You can manage them [tyres] in terms of stock and large fleets can start to think about what information they can put in that tyre: where has it been? Which vehicles has it been on? Has one truck tyre gone from one vehicle to another or, if they have trucks all over the country, they’ll be able to just scan the tyre and know that it was fitted on 2 May in Cardiff, but it’s now sat in a yard on a truck in Middlesbrough. 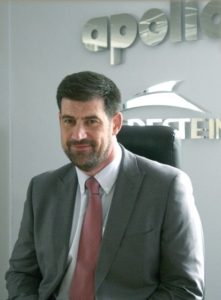 “RFID is now starting to show itself as a benefit to large truck fleets, and some of the premium manufacturers are looking at it. The way we sell truck tyres to very, very large fleets – the Eddie Stobarts of this world – is that they tend to end up having a direct relationship with the manufacturer and an agreement that works on a pence-per-mile basis. They [the fleet] pay so much per mile for their tyres, and it’s down to the manufacturer to advise them on how to look after them, how to get the best mileage out of them and to work with a service provider who’s doing regular fleet checks and all that sort of stuff – the managing and husbandry of those tyres is quite important, including things like re-grooving and re-moulding. If you’re managing that asset within a fleet, you’re starting to see a viable return on investment on the cost of fitting a chip; therefore, there have been discussions about what other information could go on this chip.”

This is where things get interesting, because the industry is speculating about the possibility of getting more out of RFID tags, allowing them to supply greater amounts of information to the tyre manufacturer and to fleet operators, such as tread depth, pressures and condition. The end result would effectively be a smart tyre that could virtually manage itself – or at least flag up any issues without requiring a physical examination – and development of the concept is already underway.

“In an ideal world, you’d want a tyre that would know when it was getting worn and what its pressure is,” says Jamie McWhir, Michelin’s technical manager for car, van and 4×4, “that stuff is being worked on and developed [and] for something like a van fleet, it would be perfect. Every time the van’s rolling up the road, it would be sending messages to the depot, so they’d know all the stuff that’s going on with the tyres.”

“It could be that you link it [the RFID chip] to the pressure monitoring system so it knows how much pressure is in there,” adds Naylor, “the system is sending information to the chip, which says: ‘I know I’m fitted to a Ford Mondeo, therefore I should have 35psi; if there’s only 32, I can send a message that says I need three more psi’.

That’s even gone further to speculation about where technology may go, such as having on-board ability to change the tyre pressure. For example, some of the high-end tractors in agricultural are sold with an on-board compressor, for want of a better word – it’s a way of [remotely] putting air into the tyres and letting it back out again – because they [the operators] have to vary the pressure in the tyres depending on what they’re doing in the field or on the road. So you link up those ideas, and you can actually imagine a tyre that recognises it’s under-inflated and inflates itself back up again.”

McWhir believes we’ll see tyres capable of such communication “in the next decade or so” but thinks there’s still work to do before mass production. “While the technology exists at the moment, you have to make something that you can put in the tyre easily enough, industrially, that’s robust and accurate but also doesn’t make a £100 tyre into a £300 tyre overnight. So the technology’s there, but it’s a bit like smartphones; you need to get it to a point where it’s easy to make, it’s robust enough, it’s the right price and it works in practice to tick all the boxes.”