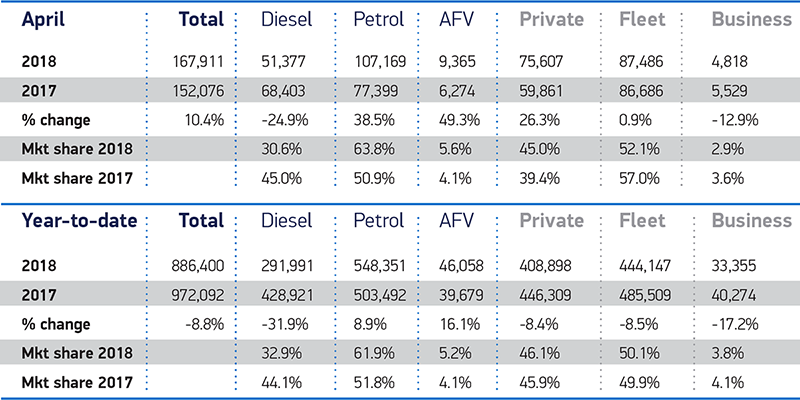 The UK new car market grew 10.4% in April, with 167,911 new units registered, according to figures released today by the Society of Motor Manufacturers and Traders (SMMT). Demand was affected by a number of factors, including the timing of Easter, which meant two additional selling days this April, and March’s adverse weather, which pushed some deliveries into April. Most significant, however, were the VED changes that came into force last April, causing a pull forward into March 2017 and a subsequent depressed April market.

April figures this year paint a mixed picture, with private demand growing 26.3%, while the fleet market remained stable at 0.9%. However, business registrations saw a significant decline, falling -12.9% compared with the same month last year. Demand for supermini and dual-purpose cars saw the most significant growth of all segments, up 27.0% and 26.8% respectively.

Demand for petrol cars grew in April, up 38.5%, while diesel registrations continued the recent trend, declining -24.9%. Meanwhile, registrations of plug-in and hybrid electric cars continued to rise, up 49.3%, thanks to manufacturer investment in a growing choice of models. While the growth is welcome, these alternatively fuelled vehicles still account for just 5.6% of the market.

Despite the significant rise in the month, the overall new car market remains down year to date, with new registrations in the first four months falling -8.8%, year on year, to 886,400 units. While this level of decline is expected to slow over the course of 2018, political and economic uncertainty will continue to affect the market and further instability could cause additional disruption.

It’s important not to look at one month in isolation and, given the major disruption to last April’s market caused by sweeping VED changes, this increase is not unexpected. While the continuing growth in demand for plug-in and hybrid cars is positive news, the market share of these vehicles remains low and will do little to offset damaging declines elsewhere. Consumers need certainty about future policies towards different fuel types, including diesel, and a compelling package of incentives to deliver long-term confidence in the newest technologies. 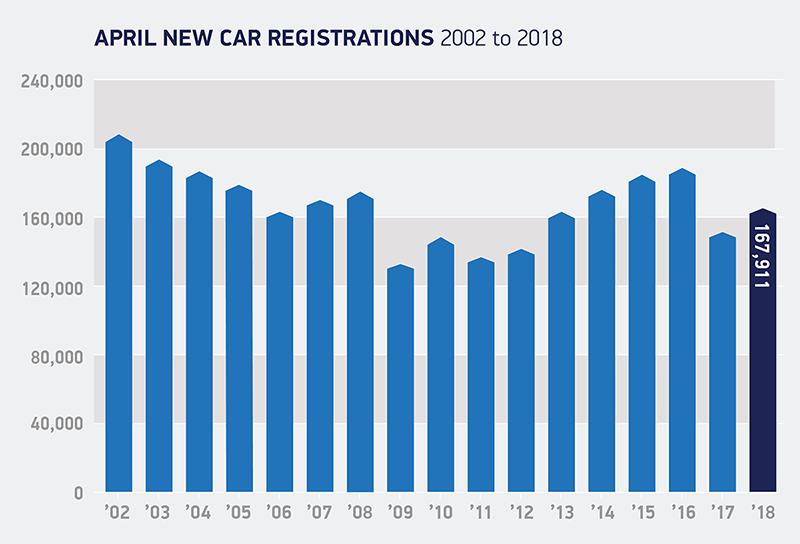