Swansea to get biggest electric van fleet in Wales 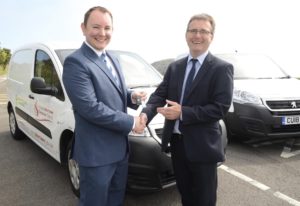 The vehicles have been leased on a five-year contract hire agreement, including maintenance and breakdown cover, from independent vehicle leasing and fleet management company Days Fleet. The vans are all fitted with ply lining and some feature high-visibility markings on the rear doors, depending on allocated use.

“Swansea Council consistently seeks to minimise the impact of its vehicle operations in what is a predominantly urban setting and had previously established the clear environmental benefits of electric vehicles with the adoption of 10 electric pool cars”, says Mark Barrow; Fleet Manager, Central Transport Unit at Swansea Council, “An analysis of journeys and mileages clearly demonstrated their potential viability [and] enabled us to achieve a much greener fleet.”

Swansea Council chose the Partner Electric because the requirement for its small vans is predominantly for use on short, local journeys.

“The duty cycles of many of the Swansea Council van fleet are well suited to electric motoring and suggest that many other local authorities could tap into similar cost saving and environmental benefits,” said Helen Lees, Head of Electric Vehicles at Group PSA. “We are delighted to have helped the Council bring together the right vehicles and charging infrastructure to assist it in reducing the impact of its vehicle operations.”