Platooning has long been mooted as a potential solution for a logistics industry looking to reduce both the cost and environmental impact of vehicle movements.

Figures produced by the European Automobile Manufacturers Association (ACEA) projected that platooning could reduce the CO2 emissions of trailing vehicles by up to 16% and of lead convoy vehicles by 8%.

Platooning is now closer to reality as proven by MAN Truck and Bus and its partnership with DB Schenker and Fresenius University of Applied Sciences in German. 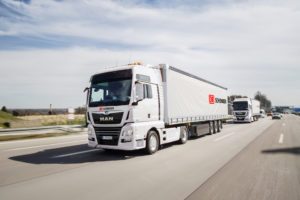 Together they conducted the first real-world trials of platooning – carrying real cargo on actual roads, including the German autobahn network – and reached the conclusion that platooning is not only possible but ‘safe, technically reliable and easily applicable in the routine of a logistics company’.

As part of a research project sponsored by the Federal Ministry of Transport and Digital Infrastructure (BMVI), professional drivers drove two electronically linked vehicles on the Autobahn 9 between the Nuremberg and Munich branches of the logistics company DB Schenker over the course of seven months. Having covered some 35,000 test kilometres, the truck drivers, who drove at only 15 to 21 meters, praised the driving comfort and the general sense of safety. The field test also demonstrated savings in fuel consumption.

According to the project partners, the use of truck platoons could also ensure more efficient use of space on motorways, less congestion and increased road safety.

Commenting after the trials, Andreas Scheuer, Federal Minister for Transport and Digital Infrastructure said, “The mobility of the future will be automated and networked. Of course, this is also true for logistics. I therefore fully support the industry in bringing technologies such as platooning to market maturity.

“We want to make the processes even safer, more efficient and more environmentally friendly, all along the value chain. The drivers have a key role to play here. In a digital truck they will be modern logistics specialists. This will open up new prospects for the profession.”

According to DB Schenker’s research, platooning can be used extensively in the logistics network. Alexander Doll, Member of the Management Board for Finance, Freight Transport and Logistics at Deutsche Bahn AG said, “We have analysed our European transport network and it is safe to say that around 40% of the kilometres travelled could be carried out in platoons.

“For this, however, further tests and ensuring the regulatory framework would be necessary. Customers would also benefit. “With platooning we can offer even more reliable transports.”

The platooning system installed in the MAN trucks operated smoothly 98% of the time. Active interventions by the driver were necessary only once every 2,000km. In addition, the pilot project demonstrated a 3 to 4 percent reduction in fuel consumption.

“We were able to show that platooning has the potential to contribute to the reduction of fuel consumption and CO2 emissions. First and foremost, we are pleased that the system works reliably and can increase safety on the motorway. Accordingly, platooning is an important step for us on the way to automation,” said Joachim Drees, Chairman of the Management Board of MAN Truck & Bus SE.

Meanwhile, scientists from the Fresenius University of Applied Sciences investigated the psychosocial and neurophysiological effects on the drivers. Having experienced the actual field test brought about a significant change in the previously sceptical attitude of the drivers.

“A general sense of safety and trust in the technology is echoed in the drivers’ assessment of specific driving situations. None of these were described as uncontrollable,” said Professor Sabine Hammer from the Institute for the Science of Complex Systems (Institut für komplexe Systemforschung, IKS) at the Fresenius University of Applied Sciences.

The drivers experienced vehicles of other road users cutting in from adjacent lanes or cutting across multiple lanes as “disagreeable”, but not critical.

“Due to the fast response times of the system, drivers would now prefer a distance of 10-15 meters,” said Hammer.

Professor Christian Haas, Director of the IKS added, “The EEG measurements show no systematic differences between platoon runs and normal runs when it comes to the neurophysiological stress placed on drivers, i.e. in terms of concentration or fatigue,”.

For international use, the scientists recommend further research with longer periods in platooning mode. The project partners are convinced that the potential of truck platooning can be further increased by future developments. In addition, new digital business models in logistics are conceivable. 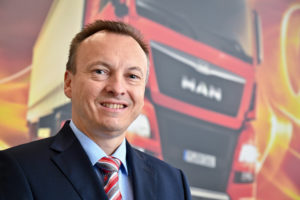 In the UK, Thomas Hemmerich, Managing Director MAN Truck & Bus UK Ltd, said, “It’s really interesting to see the statistics from the trial, which involves moving customer goods, and how platooning has demonstrated clear savings in terms of reduced fuel consumption and CO2, while at the same time free up valuable road space.

“What is also interesting is the positive feedback from both the Fresenius University of Applied Sciences and the drivers involved, and how they have monitored neurophysiological stress placed on drivers which shows no systematic differences between platoon runs and normal runs.”