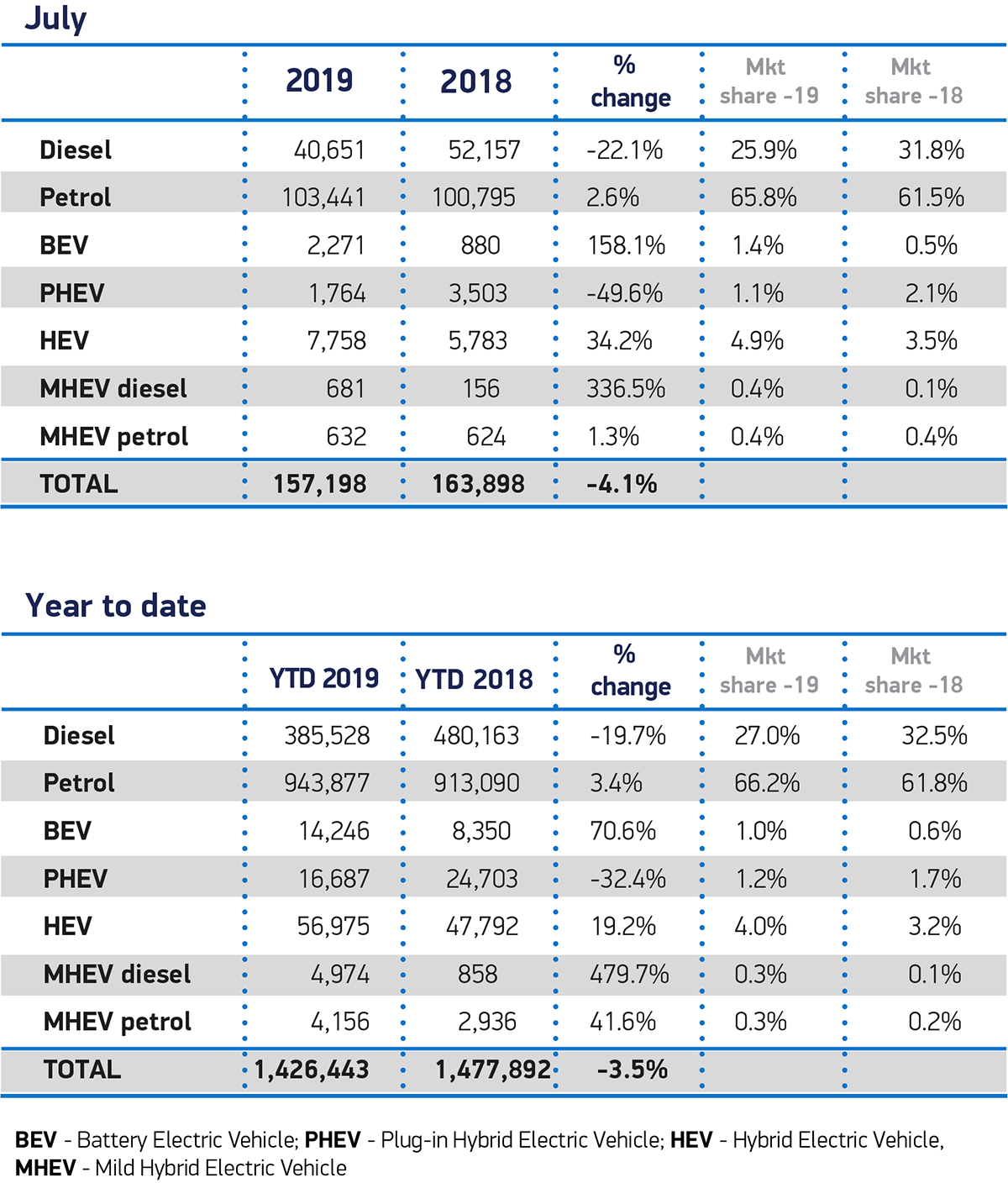 The UK new car market declined again in July, with 157,198 vehicles leaving showrooms, according to figures released today by the Society of Motor Manufacturers and Traders (SMMT). Registrations fell by -4.1%, the fifth consecutive month of decline, as political and economic uncertainty and confusion over future government policy on different fuel types continued to knock consumer and business confidence. 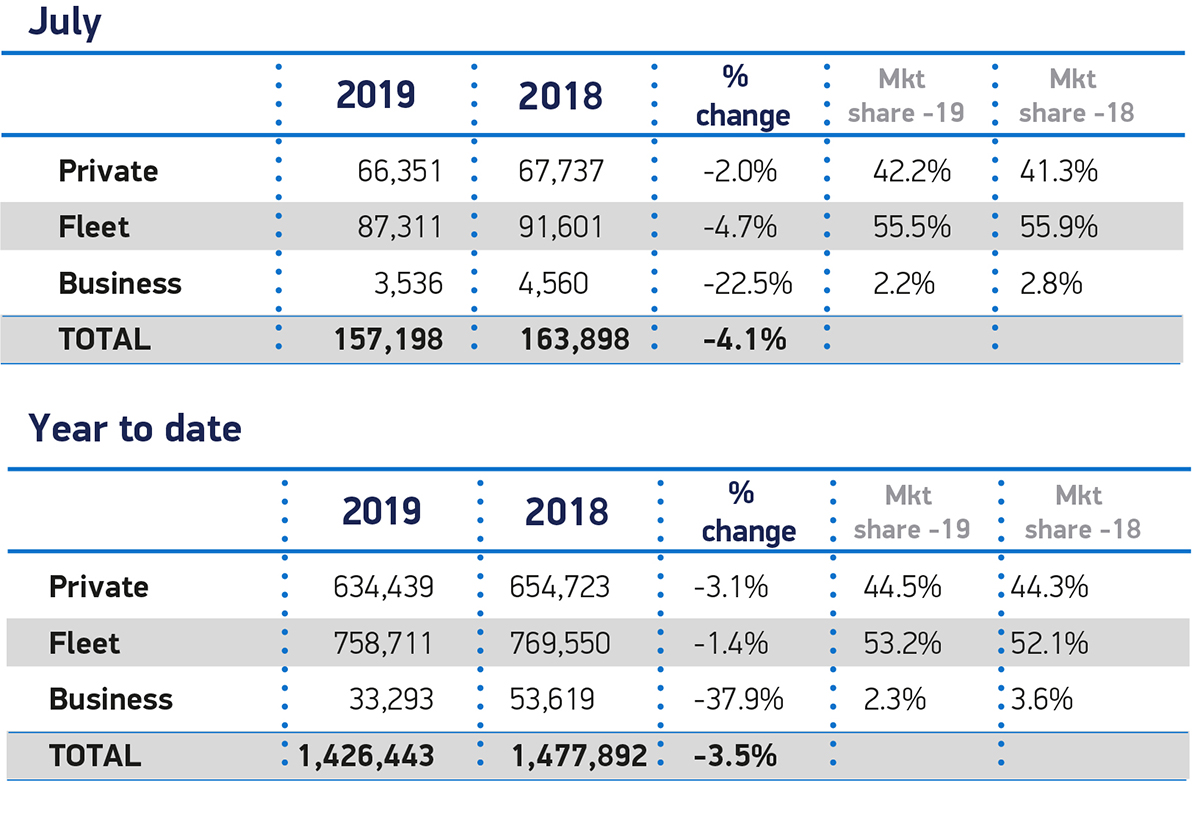 Declines were seen across all sectors, with private demand falling -2.0%, while deliveries for fleet and business customers were down -4.7% and -22.5% respectively. Luxury saloons and specialist sports cars experienced a rise in registrations in the month with volumes driven by increased demand for dual purpose vehicles, up 12.8% to take nearly a quarter (24.4%) of the market. All other segments experienced declines in the month, with the biggest falls seen in executive (-21.6%) and supermini (-12.1%) segments. 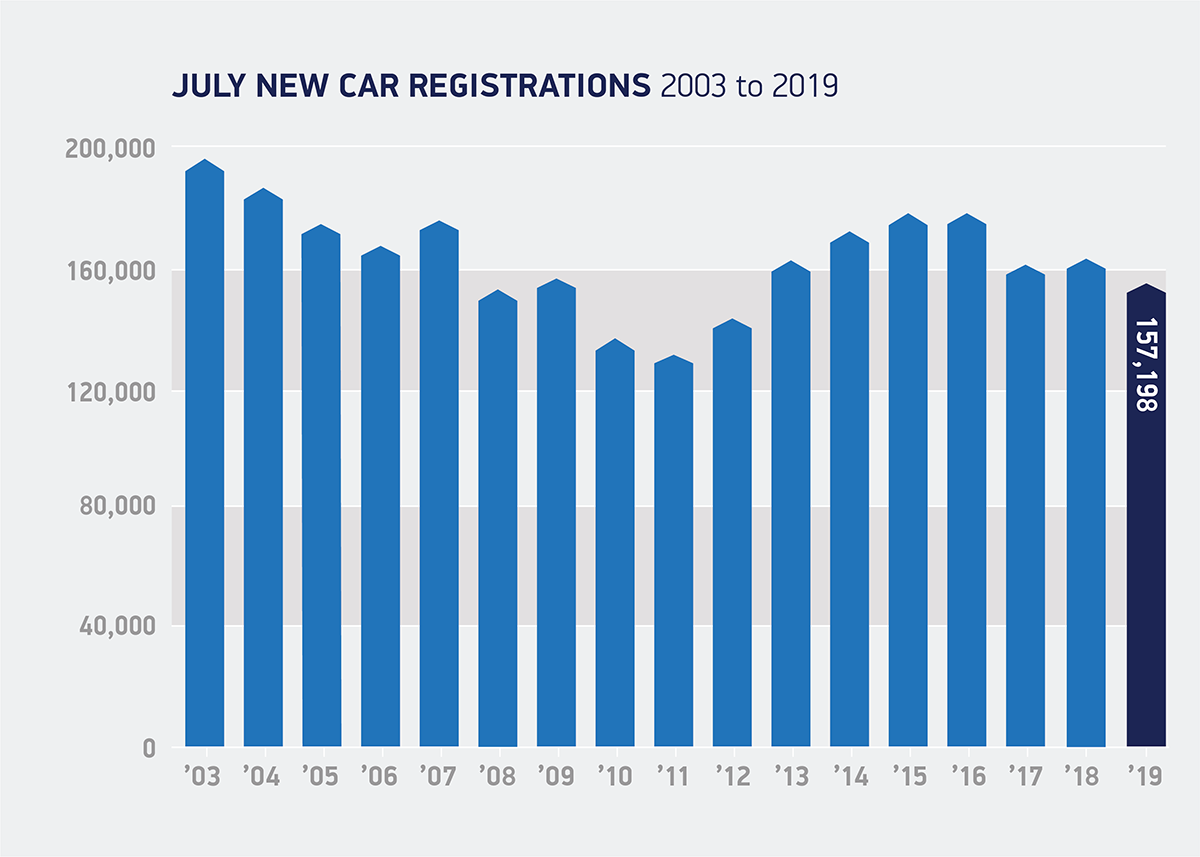 Registrations of diesel vehicles fell for the 28th month, down -22.1%, while petrols remained stable, with 2,646 more registrations than in July 2018. Hybrid electric cars increased by a substantial 34.2%, with 7,758 of these low-emission vehicles joining UK roads. Meanwhile, plug-in hybrid electric vehicles continued their recent decline, down -49.6%. Demand for battery electric vehicles shot up by a massive 158.1%, resulting in a 1.4% market share, the highest monthly market share on record.

Manufacturers have invested heavily in a growing range of powertrain options, with British drivers now having the choice of advanced low emission petrols and diesels, and an ever-greater number of hybrid, plug-in hybrid, battery electric and even hydrogen cars. There are currently more than 350 models available in the UK – around 80 of them alternatively fuelled, including 21 battery electric, with more expected to arrive in showrooms later this year.

SMMT forecasts this ongoing investment into new, ever more advanced powertrain technology will result in battery electric vehicles doubling their market share next year, with 51,000 registrations in 2020. However, this will still represent only 2.2% of the overall market. For the UK is to meet its zero emission ambitions, we need world-class, long-term incentives, supportive policies and substantial investment in infrastructure.

Despite yet another month of decline in the new car market, it’s encouraging to see substantial growth in zero emission vehicles. Thanks to manufacturers’ investment in these new technologies over many years, these cars are coming to market in greater numbers than ever before.

If the UK is to meet its environmental ambitions, however, government must create the right conditions to drive uptake, including long-term incentives and investment in infrastructure. The fastest way to address air quality concerns is through fleet renewal so buyers need to be given the confidence to invest in the new, cleaner vehicles that best suit their driving needs, regardless of how they are powered.