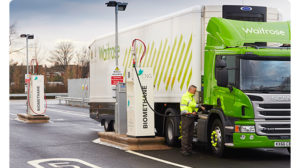 Between them, the two sites are capable of refuelling up to 1,000 vehicles a day.

Now the company is embarking on what it calls an ‘aggressive’ growth plan that will see it open at least another nine major refueling stations on major UK roads over the next two years.

This will help it keep up with demand for the fuel which, it says, has surged 800%, and wider industry adoption, which it believes will see some 60,000 biomethane fueled commercial vehicles on UK roads by 2030.

But just how big can biomethane and compressed natural gas become when other options such as electric and hydrogen are so heavily touted as the next big thing?

This week TNB spoke to Peter Eaton, General Manager of CNG Fuels, to find out more about the fast-growing company’s plans, hopes and ambitions.

TNB: What exactly is CNG?

Bio-CNG, or compressed biomethane differs from fossil-derived CNG or (Liquefied Natural Gas) as it’s a bi-product derived from the decomposition of organic matter, such as food and animal waste.

Once collected, biomethane is injected into the gas pipeline network from where it can be delivered to our refuelling stations for use in CNG vehicles.

TNB: And what are the advantages of CNG vehicles?

It also has the benefit of delivering this without any significant compromise to range and payload.

TNB: How do you begin working with fleets on the adoption of CNG?

PE: The crucial part for us is building trust with fleets and developing their belief in the technology and financials.

We’re always in contact with potential customers – usually customers who know of other fleets that are seeing results or that are based around one of our refuelling stations – and our strategy is to run real world trials with them.

Usually, we’ll give them a demo vehicle to run on trial and we’ll monitor results for a three of four-week period. At the end of the trial we’ll prepare a detailed feedback presentation that will compare the CNG vehicle’s operation to that of one of their diesel units.

We then work up numbers based on annual mileage and create a payback model that shows the financial gains and reduction in GHG emissions they can make with CNG.

Typically, based on an annual mileage of 100k, that payback comes in between one and two years and the savings made over the lifetime of a vehicle can be anywhere between £75,000 and north of £100,000.

These financial savings are so significant because the cost difference between CNG and diesel is large.

PE: There’s absolutely no conversion process involved. These are full production models supplied directly by OEMs, the biggest of which currently are Scania and Iveco.

There are all sorts of models out there already – everything from 3.5 tonnes up to 44 tonnes – and all of them are commercially viable.

TNB: One of the big advantages, unlike electric or hydrogen, must be that there’s no change of mindset required?

That’s because there’s been no major changes to their operation involved to change their fleet to CNG. Essentially they’re running exactly the same vehicle but with a different engine in it.

In terms of operation, there’s nothing drastically new to get to grips with.

Take refueling. You don’t have to plug in and recharge or wear all sorts of protective equipment like you do with cryogenic fuel. You just go to the refuelling station, connect up your nozzle, it fills automatically with fuel and then you drive away. The whole process is extremely simple and takes maybe a minute or two longer than filling with diesel.

TNB: Presumably you wouldn’t be investing in this infrastructure if you didn’t see a long-term future in it?

We believe there’s nothing around the corner that’s going to trump biomethane in the next 10-20 years and it’s only going to become more attractive to fleet operators as we move forward.

At the moment fleets are attracted by the cost savings and also by the 85% carbon reduction offered by CNG as opposed to diesel.

Next year, we will be sourcing a significant amount of our biomethane from cow manure and that will make us the first fuel to be certified as carbon negative.

That will be huge, allowing fleets to make over 100% savings in carbon. You can’t get any greener than that!

TNB: So you’re not worried about electric or hydrogen?

PE: In our view electric for long haul HGVs is a long way away and we’re not going to get it anytime soon.

We know it’s coming for sure, but for now the batteries needed for long haul HGVs would weigh too much and would mean sacrificing too much payload for them to be viable.

Again, with hydrogen, we anticipate it’s going to be a decade or two away. For now it’s too expensive and the business case doesn’t really stack up in our opinion.

When one of these technologies comes of age, we may have to look again at our business model but for now we’re very confident that CNG and biomethane has a long future.

PE: Over the next couple of years we’re going to be expanding at a rapid rate with at least nine new refueling sites operating across the UK.

Our aim is then to get one new site up and running each month from 2022.

Our next new site will open in Erdington in October, and that will be followed by another in Knowsley in November. After that, we plan to open in Newark-on-Trent in Q1 2021, and then we’ll add sites in Avonmouth, Bellshill, Larkhall, Castleford and Corby before the end of the year.

After that we’re just going to keep building them to meet demand.

TNB: OK, so just how big do you see CNG becoming in the UK?

PE: It’s hard to put exact numbers on it but there’s huge potential.

TNB: Lots of operators work beyond UK borders though. Is CNG a viable option for those travelling to  mainland Europe?

PE: Absolutely. We recently ran a trial with a fleet operating out of Avonmouth. They took the demo vehicle on one of their routes that goes through France, Germany and Belgium. They refueled several times along the way and experienced no problems. CNG is very commonly available in Europe, even if the stations aren’t necessarily HGV-specific.

TNB: Finally, what’s your message to any fleets looking into CNG/Bio-CNG?

CNG is a bit of a no brainer in our world and that is what our customers think too.

There are significant carbon savings to be had and massive fuel cost savings as well.

I know some fleets that have saved well over £100,000 over the lifetime of a vehicle versus a diesel.

We’re working flat out to grow the refuelling network on major trunking routes, so it becomes easier and easier for fleets to make the switch.