Feature: How electric vans are charging up the delivery business

The courier industry naturally lends itself to the current crop of electric vans. Small electric LCVs are about as appropriate as it gets for ferrying packages around towns and cities in traffic, producing zero tailpipe emissions and dodging any air quality or congestion-related charges. That’s why delivery companies such as DHL have electrified their urban fleets, while companies such as Gnewt specialise in urban centre deliveries performed solely by plug-in LCVs. 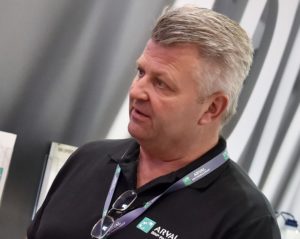 To date, mass market electric vans have typically comprised smaller, lighter models, which are flourishing in both urban delivery capacities and off-highway applications, as Simon Cook, LCV leader at leasing firm Arval, explains: “We’ve got an established small van electric range and manufacturers have been doing those for a while now. They suit two sectors: one, last-mile deliveries – typically urban areas where they’re delivering from their hub to the customer, with a diminishing load.

“The other industry that I’m seeing electric vans going into is the service industry [such as] canteen or café catering facilities on site for clients. They’re providing perhaps a workshop service or, when you’ve got a client who’s got a large centre – for example, Airbus have big sites in Ellesmere Port and Bristol, where they build the aircraft – and on that site, you have electric vans operating for the canteen facilities; they’re literally running between the canteens on a specific location. And they’re very, very pleased with them because there’s little or no maintenance and they’re extremely easy to operate.”

According to Cook, electric vans are not simply limited to short hops in off-road capacities, as the larger the site, the greater the benefits. “Another good example would be the Alliance Healthcare Boots operation in Nottingham, where they have a 55-acre site – almost a small town in itself. Those vehicles don’t go off site, so it’s an ideal location for an electric operation to either deliver post or a service on site. We are talking people who are running power stations who are looking at electric vehicles as a go-to option because A. they want to be environmentally friendly and B. they have a huge site that they want to get around and plug in whenever they need to.”

To add to the success of small electric vans, manufacturers have recently begun introducing larger plug-in models which, according to Cook, are critical to the wider uptake of plug-in LCVs in what he describes as the “essential” delivery sector. He believes that bigger vehicles with more spacious loadbays and greater payloads have the capacity to accelerate the number of electric vehicles taken on by delivery companies, which typically favour big vans.

“We are now moving into long wheelbase, high-roof electric vans. Renault launched theirs at the CV show – the Master – we have the Iveco 35 panel van, which has been available for, I think, 12 months, and we have Mercedes and VW with their Sprinter and Crafter electric vans, although they’re not available in the UK as we speak. They’re 3.5 tonnes, or in the case of the Renault, 3.1 tonnes, and those vans are literally new on the market.”

Cook also reckons there’s a demand for plug-in hybrid panel vans from the delivery sector and elsewhere. Currently, there are no such models on sale in the UK, but Ford is trialling a petrol-electric plug-in hybrid Transit Custom in London and Valencia in Spain, prior to the model’s proposed on-sale date in 2019. 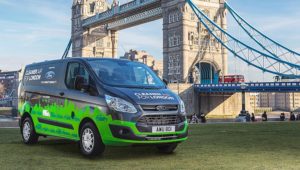 “That would absolutely answer the question about electric operation but also with the ability to switch to petrol when you need to. I think the only challenges there are payload, which, if you’re adding an engine to an already heavy vehicle with batteries etc, you could end up with a compromise. But if you could get the technology lighter, with a longer range, and have a hybrid or even a diesel electric hybrid that’s light enough, then I think we could start to really make changes in this industry.”

A potential increase in the payloads of battery-powered LCVs could also broaden the remit for manufacturers and bolster UK sales. In May, the government launched a consultation, which, among other areas, proposed to raise the payload for electric vans from the current 3.5 tonnes to 4.2 tonnes to account for the additional weight of batteries.

“We don’t know yet whether it’s been firmed up or not, but the other thing that’s possible is that the gross vehicle weight on electric vehicles could be increased beyond 3.5 tonnes. We are waiting to see if that goes through and, if it does, that will help payload.

“Just by increasing the vehicle weight from 3.5 to 4.2 [tonnes], you end up effectively negating the problem with heavy batteries. It wouldn’t help with range or any of the other issues typically associated with electric LCVs, but it would help with payload. There are challenges there, but I guess what they [manufacturers] would do is use some of that additional payload weight to give the battery more power for a longer range.

The consultation– which also addresses a proposed change to the existing van VED structure, among other elements – is open until 11.59pm on 20 July 2018 and the government is appealing for feedback from van owners, operators, manufacturers and others with an interest in LCVs.