The Society of Motor Manufacturers and Traders (SMMT) has called on government to put the automotive sector at the heart of future trade negotiations, after publishing a new report today confirming vehicles as the UK’s single most valuable goods trade export.

Vehicle export revenues reached £27 billion in 2020, making them more valuable to the UK than power-generating machinery and gold, even during a year when the global pandemic disrupted trade flows and shut down markets around the world.

The UK automotive sector as a whole generated a total trade revenue of £74 billion, underlying its monumental importance to international trade, with more than 80% of British-built cars and more than 60% of light commercial vehicles destined for export.

With hopes rising worldwide that the pandemic is now in retreat, the UK’s trade policy must now take advantage of the opportunities from a post-Brexit, post-fossil fuel world to restore growth and jobs with automotive central to this ambition.

With the global car market expected to grow significantly in regions such as Asia and Eastern Europe, SMMT is calling for future trade deals to include dedicated automotive annexes and provisions to reduce tariffs and regulatory barriers. It also recommends establishing Rules of Origin that will reflect the UK’s future supplier base as manufacturing moves away from the combustion engine, as well as ensuring manufacturers have the ability to recruit top talent from around the world to drive growth. 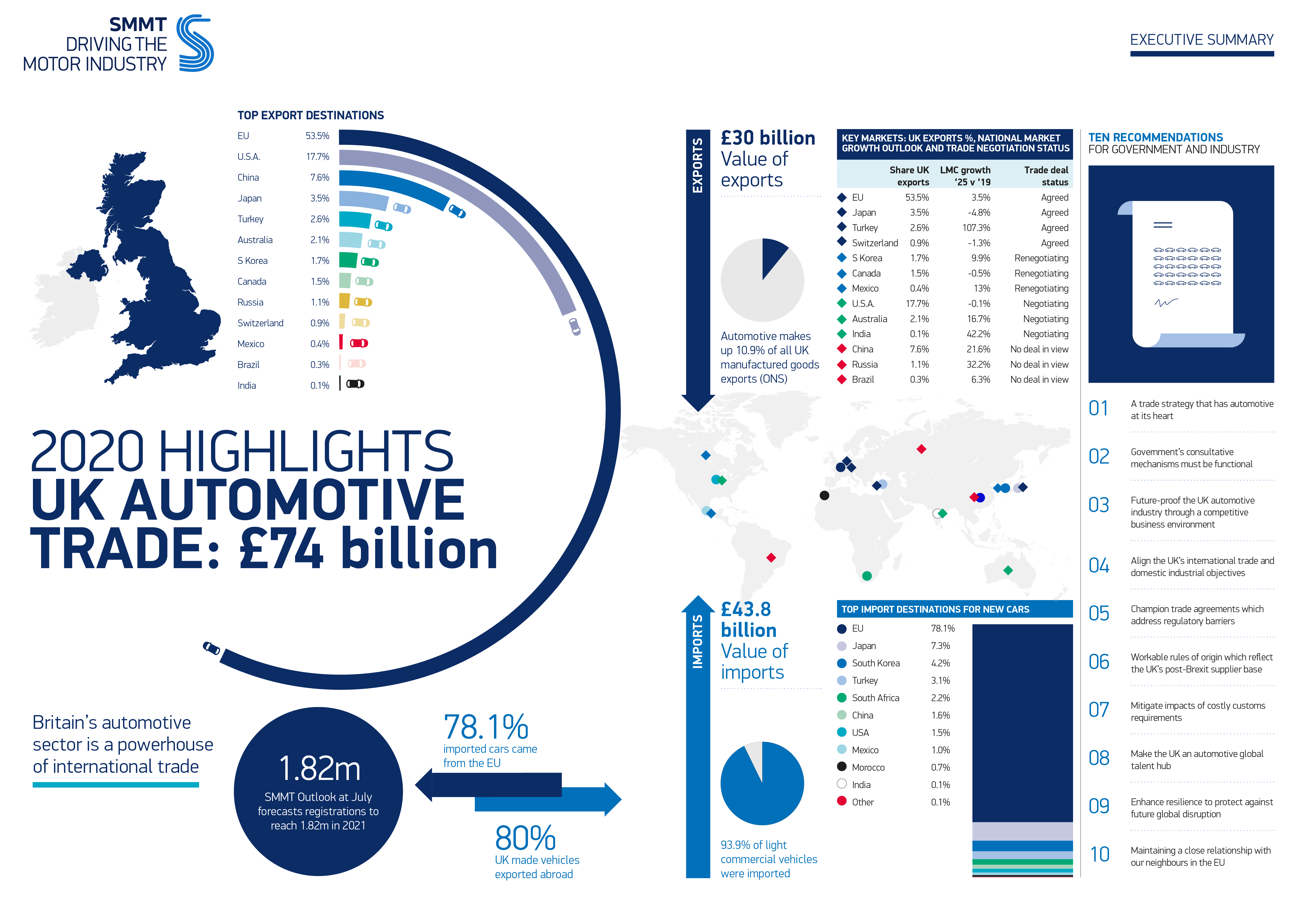 The report, launched today at SMMT’s inaugural Global Trade Conference, also highlights the importance of trade with the EU. Around half of all cars made in Britain are exported to EU member states, while almost all vans exported by the UK end up on European roads. While the industry looks ahead to post-Brexit trading opportunities, the EU will remain a central trade partner.

With the UK at the forefront of the global electric vehicle revolution, trade policy should also ensure that Rules of Origin reflect appropriate sourcing of batteries for electric cars, so that UK-built zero emission vehicles can be freely exported around the world and play an essential role in reducing emissions.

Likewise, making the UK an even more attractive destination for global talent will ensure that the British automotive sector – already the most varied in the world – can continue to drive innovation and growth for Global Britain.

As the world re-emerges from the pandemic, the diversity and importance of Britain’s automotive industry is the UK’s competitive advantage for restarting growth, creating jobs and tackling climate change. With automotive at the heart of future trade policy, and negotiations focused on removing both the tariff and non-tariff barriers that stifle growth, we can drive forward the growth of Global Britain and sustain our place as an economic, industrial and environmental leader.