A new report highlighting the importance of automotive trade to the UK economy and the high stakes of a ‘no deal’ Brexit. SMMT’s 2019 UK Automotive Trade Report calculates that delays to production caused by friction at the border could add up to £50,000 a minute for the sector. 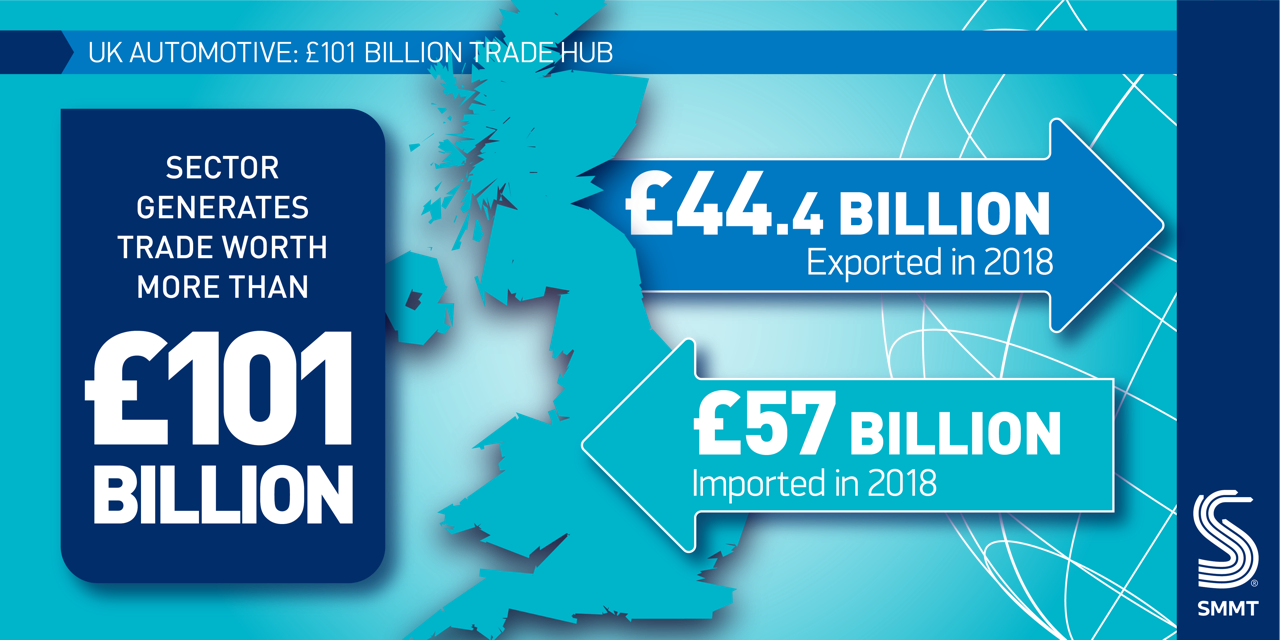 Leaving the EU without a deal would trigger the most seismic shift in trading conditions ever experienced by automotive, with billions of pounds of tariffs threatening to impact consumer choice and affordability.

The end to borderless trade could bring crippling disruptions to the industry’s just-in-time operating model. Delays to shipments of parts to production plants are measured in minutes, with every sixty seconds costing £50,000 in gross value added – amounting to some £70 million a day in a worst case scenario.

Combined with WTO tariffs, which for trade in passenger cars alone amount to £4.5 billion a year, this would deliver a knockout blow to the sector’s competitiveness, undermining a decade of extraordinary growth. 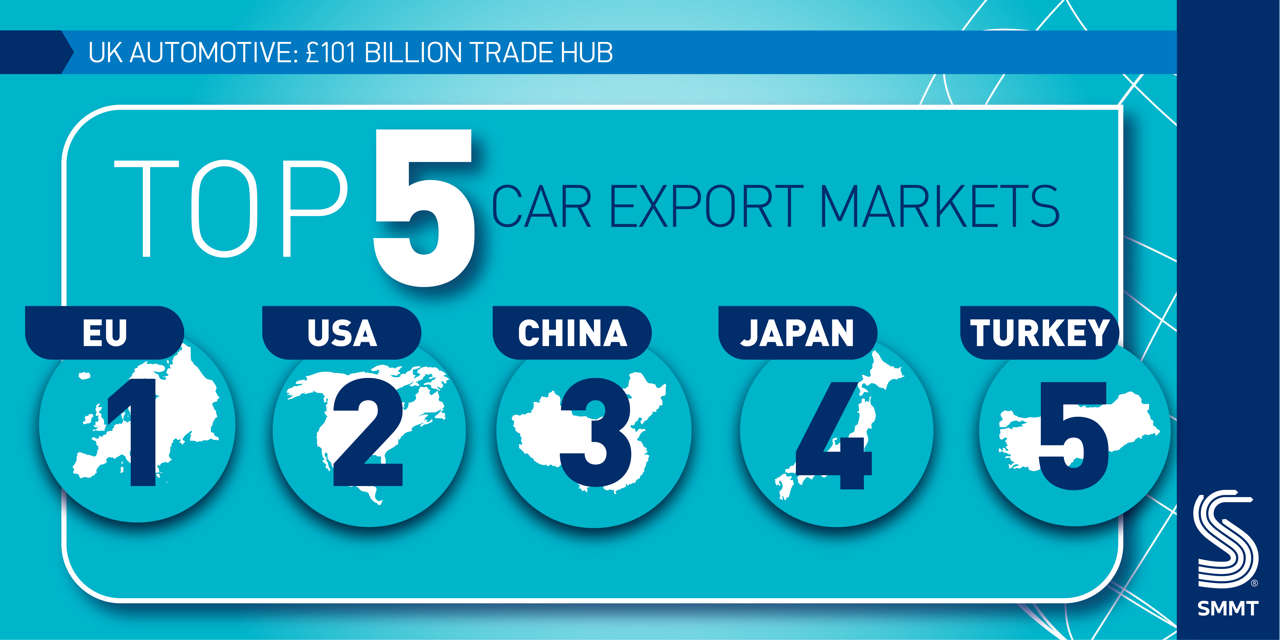 Thanks to the free and frictionless trade afforded by the customs union and single market, automotive trade value has risen by 118% since the global financial recession, from £47 billion in 2009 to £101 billion last year.

Over the same period, car production increased by more than half, with more than eight in 10 vehicles bound for export – the majority to the EU. 3.3 million new cars are traded between the UK and EU each year, while the UK exports some £5.2 billion worth of components and £2.9 billion of engines to help build vehicles across the continent. 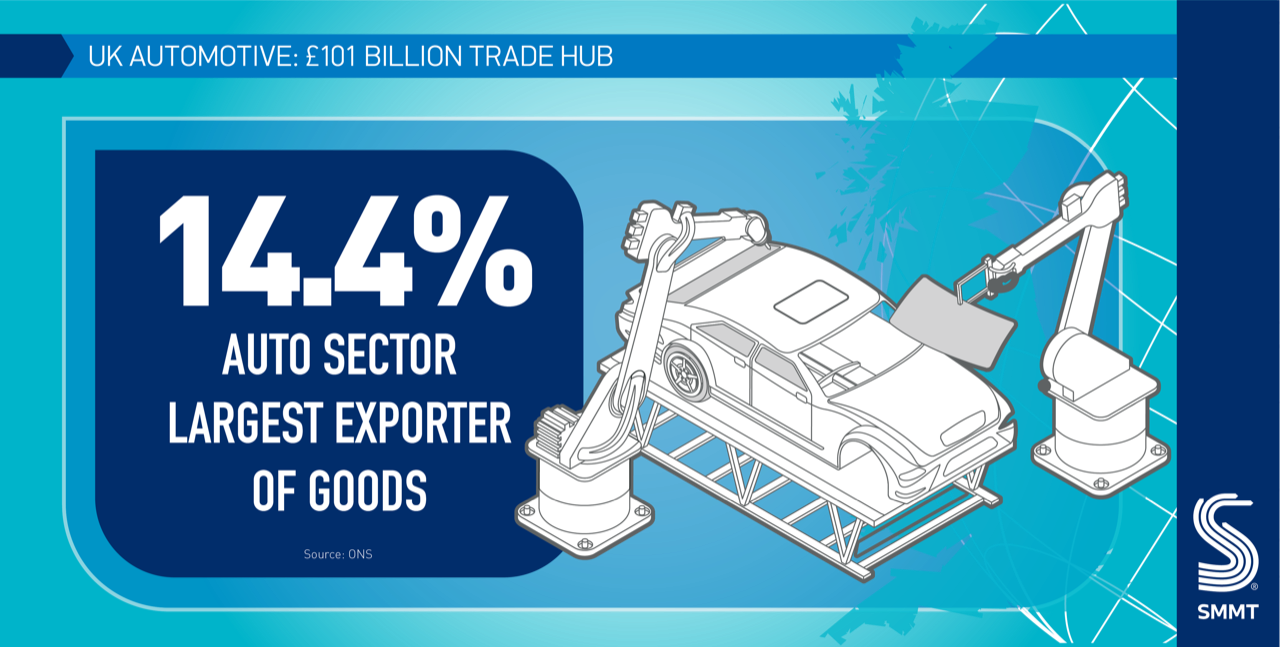 Automotive is the UK’s single biggest exporter of goods, trading with some 160 countries worldwide, and accounting for more than 14% of total exports. The sector is one of the country’s most valuable economic assets, directly employing 168,000 people, supporting communities and delivering an annual £18.6 billion to the public purse.

Leaving the EU without a deal would jeopardise this, hampering government’s ambitions to boost global exports and GDP. Without automotive, the UK would lose its hard-won status as the world’s 10th biggest exporter of goods, falling to 14th place behind Belgium, Canada, Mexico and Russia. 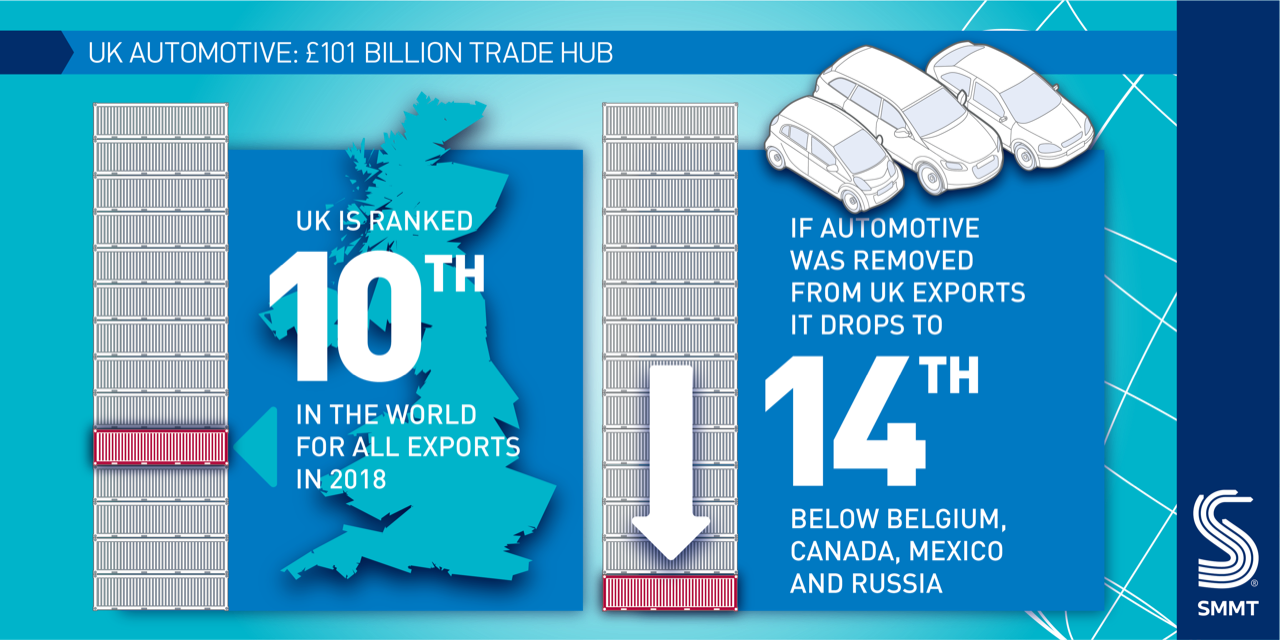 However, the report also calculates that the right deal, backed up by ongoing collaboration to create a competitive business environment and thriving market, and combined with an ambitious automotive-focused trade strategy, could trigger a 20% uplift in the industry’s global trade value – worth £20 billion, if the sector can maximise its full capacity.

SMMT’s first-ever 2019 UK Automotive Trade Report charts the rise of the sector over 40 years, outlining current and future challenges and opportunities for trade with Europe and globally. It sets out clear set of recommendations to government and industry to help boost competitiveness, promote frictionless trade with existing markets and unlock new business between the UK and key export destinations around the world.