The automotive industry shares government’s Net Zero vision and is fully committed to zero emission motoring. These are evidenced by the very significant investments that have resulted, and are continuing to result, in a rapidly increasing number of plug-in models introduced and an exponentially growing plug-in vehicle market. Plug-in vehicles accounted for a record-breaking more than one in six UK car registrations in 2021, while battery electric vehicle (BEV) registrations rose to an all-time high of one in nine, with more registered than in 2016-2020 combined. 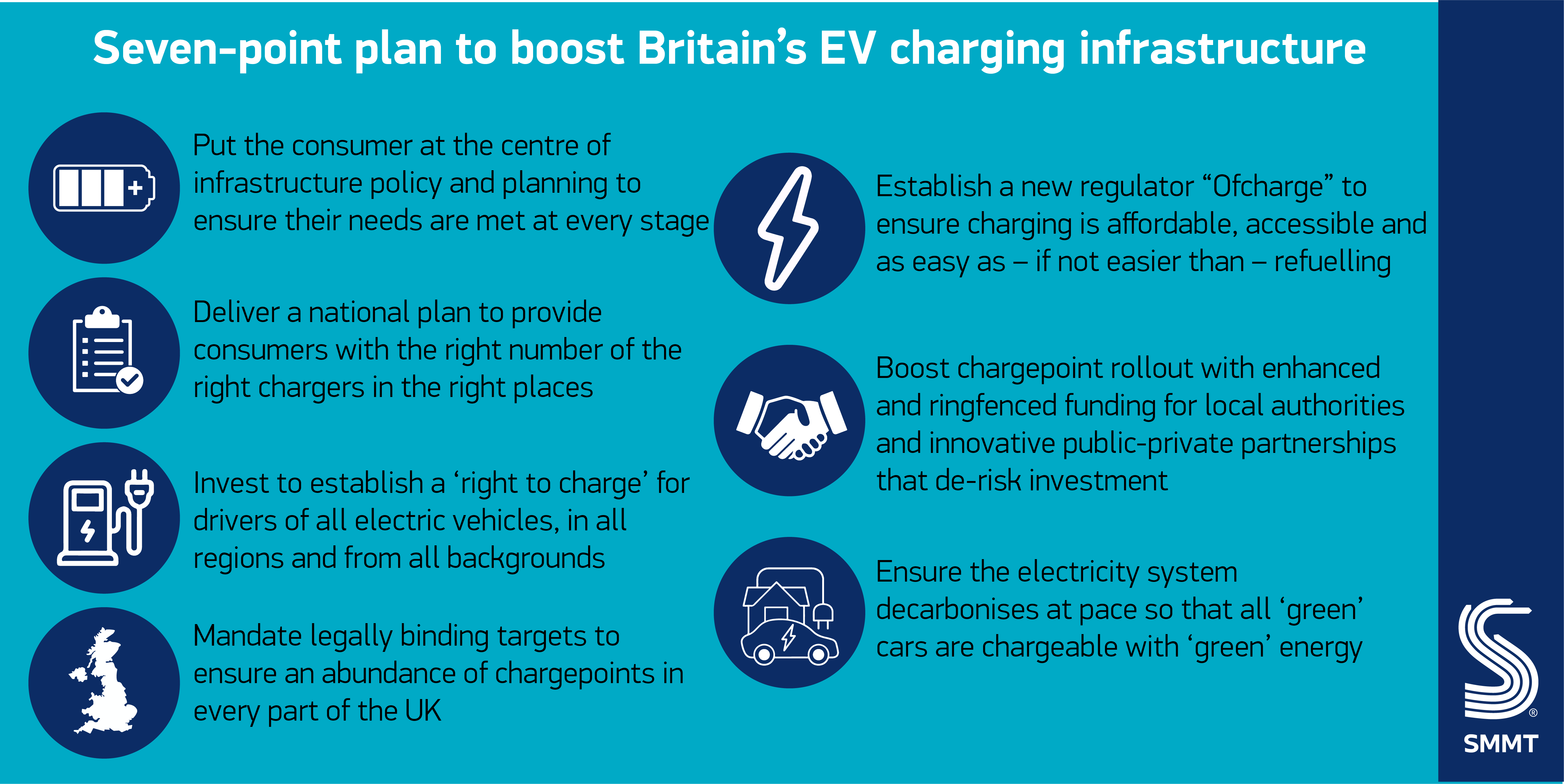 Our outlook is positive, as we believe the new plug-in car market will continue to grow at an exponential rate, resulting in a car parc comprising 9.3 million plug-ins by 2030 (27.0%) and 18.4 million by 2035 (54.8%), of which 6.9 million (20.1%) and 15.3 million (45.6%) respectively are BEVs. However, this outlook is contingent on the key assumption that charging infrastructure is no longer a barrier to mass market uptake. Unlocking the full environmental and socioeconomic benefits of this transition requires collaboration involving industry, government and key sectors such as fleets, infrastructure and energy.

Government, local authorities and the charging infrastructure sector deserve credit for the more than 3,000% growth in public charging infrastructure since the first chargepoints were installed in 2011. However, every single reputable study or consumer survey have invariably and consistently shown that the inadequacy of infrastructure provision is still a concern for many consumers and is a main barrier to mass uptake. Range anxiety has now been replaced by charging anxiety. Although most current plug-in vehicle users charge at home, public chargepoints remain critical for consumer confidence and are heavily relied upon by many commercial and grey fleets as well as the one-third of British households that do not have off-street parking.

As plug-in vehicle registrations surged, public charging infrastructure expansion has failed to keep pace. Plug-in cars on the road had grown a phenomenal 280.3% between 2019 and 2021, but slow/fast public chargepoints grew by just 69.8% in the same period. While BEVs in the car parc grew by a staggering 586.8%, rapid/ultra-rapid charger stock grew by 82.3%. We should be proud that the UK is a leader in the rapid/ultra-rapid charger segment, with its 32 BEVs per charger ratio well ahead of most major markets apart from China (11:1), South Korea (12:1) and Japan (17:1). However, our plug-in cars per slow/fast public charger ratio has deteriorated from 11:1 to 16:1, which compares unfavourably to the ratios in South Korea (3:1), the Netherlands (5:1), China (9:1), France (10:1) and Belgium (13:1).

With government’s 2030 and 2035 end-of-sale deadlines in place and binding targets for zero emission vehicle sales expected from 2024, the UK automotive industry is required to make a more significant and advanced commitment than just about any other major car or van market. Yet there is a glaring lack of an equivalent mandate with binding targets for delivering a commensurate nationwide network of chargepoints that is fit for purpose for the mass market transition and that matches consumer needs.

Left entirely to market forces, the rollout of chargepoints will naturally prioritise commercial rather than consumer interests, focussing predominantly on the more profitable types of chargers and highutilisation locations. As a result, while the problem may not be a lack of chargepoints, the provision of public chargers risks becoming increasingly inadequate, inequitable and disproportionate as plugin vehicle uptake accelerates. The lack of regulation in the charging infrastructure market, meanwhile, has resulted in poor consumer experience, as both the Competition and Markets Authority and government have discovered. Charging should really be as easy and uneventful as refuelling.

Industry is determined to work with government and all stakeholders to jointly deliver an ambitious transition to zero emission mobility that has consumers at the heart of it and is accessible and affordable for all. Consumer-centricity must be based on three fundamental principles: adequacy, experience and equity. In this paper we set out the UK automotive industry’s views on the key measures required to deliver consumer-centric charging infrastructure that is pivotal to a successful transition. Involving the three inextricable and mutually reinforcing elements of binding targets, proportionate regulation and enabling support, these measures are summarised in the following seven-point plan.