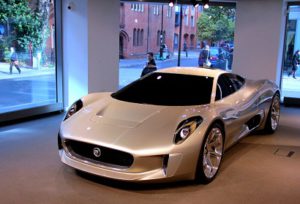 SMMT has welcomed the latest exhibit to its modern Westminster exhibition space this morning: Jaguar’s cutting-edge Project C-X75. The car was originally conceived as a concept to celebrate the marque’s 75th anniversary, but has since been confirmed as a limited production model to be built in the UK.

The hybrid supercar aims to be one of the fastest, low-emission vehicles in the world, with the road-going version of the concept car using a highly boosted internal combustion engine in place of the concept’s micro-turbine technology.

The production version of Project C-X75 will incorporate a battery Kinetic Energy Regeneration System (KERS), developed in Formula One and now adapted for production vehicles. The car will be a bona fide hybrid, capable of running in electric-only mode for 50km or more. Jaguar expects the car to produce CO2 emissions of less than 99g/km, while being able to achieve a sub-three second 0-60mph time and a top speed in excess of 200mph.

Project C-X75 will become Jaguar’s most advanced model to date, incorporating technology and engineering honed at the highest level of motorsport. The vehicle is planned to be built at Jaguar’s Castle Bromwich factory, in association with Williams F1, lending its engineering expertise in areas including aerodynamics, carbon composite manufacture and hybrid technologies.

“People expect Jaguar to be innovators Ã¢Ë†â€™ that is when Jaguar is at its best,” said Adrian Hallmark, Jaguar Brand Director. “The C-X75 received an incredible reception as a concept car. We’ve been building on that momentum and there is a clear business case for this exclusive halo model. No other vehicle will better signify Jaguar’s renewed confidence and excellence in technological innovation than this.”

Sir Frank Williams, Chairman of Williams F1, added, “Our new association with Jaguar Land Rover provides us with an exciting opportunity to work with one of the motoring world’s most famous and iconic brands. Williams has always considered itself an engineering company and so this project will allow us to combine our technical expertise to create something truly exceptional.”

Click through the slideshow below to see all the photos from SMMT’s exhibition space: