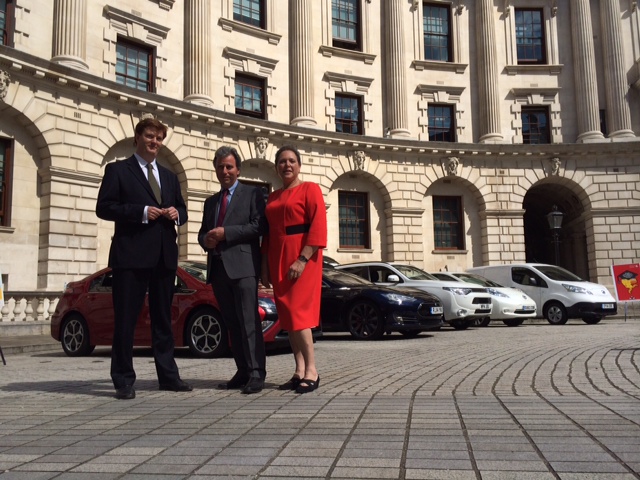 The Office for Low Emission Vehicles (OLEV) is to offer funding to all government departments for plug-in cars and vans.

The investment totals £5 million, and aims to set government on the road to widespread adoption of ultra-low emission vehicles (ULEVs) across its fleets. The first wave of the scheme will see more than 150 plug-in vehicles introduced and chargepoints installed to provide the necessary infrastructure.

Leading the way in the initiative will be the Government Car Service, which provides ministerial cars; the first plug-in cars are expected to arrive this autumn.

Baroness Kramer said, “Government must lead by example. Today’s investment will see government switching a significant number of plug-in cars and vans into our fleets and leading the electric charge.”

Chief Secretary to the Treasury, Danny Alexander, said, “I am delighted the Government Car Service is leading the move to electric vehicles and I will be one of the first in line to use one. This is the right thing to do, with much lower running costs and close to zero emissions, these vehicles will save the taxpayer money and be much greener.

“We are also investing significantly in ultra-low emission vehicles which will help ensure they play an important role in the UK economy as well as the environment.”

The initiative will be widened in the autumn to encompass the public sector as a whole, allowing organisations such as councils, police forces and the NHS to adopt more plug-in vehicles.

The UK saw more than 3,300 plug-in cars registered in the first half of 2014 – a 114% growth on last year. In April, Deputy Prime Minister Nick Clegg announced £500 million investment into ULEVs, including: