Figures released today by the Society of Motor Manufacturers and Traders (SMMT) show an increase in demand for UK-built commercial vehicles. Britain produced 9,648 vans and trucks in March, representing an uplift of 43.3% over last year. In the first quarter of the year, 23,435 commercial vehicles were produced, marking 19.1% growth following reduced output in 2014.

This growth can be attributed to a particularly strong home market and a ramping up of volume production to meet demand for new to market vans. The UK’s CV sector saw a record quarter for registrations with 108,456 van and truck orders fulfilled. This has translated to a 63% upturn in production of UK-built vehicles in March and 37% over the quarter, with light commercial vehicles accounting for more than four fifths of output.

In further evidence of the sector’s return to form, the export market has also posted growth of 31% in March and 3.9% this quarter. This is in part due to a recovering European market, which has seen an 8.8%* increase in registrations so far this year.

“The commercial vehicle sector has enjoyed a strong resurgence so far in 2015 after a subdued couple of years,” said Mike Hawes, SMMT Chief Executive. “Driving this readjustment is a home market invigorated by new product, increased consumer and business confidence, as well as an upturn in demand for UK-built vans and trucks across Europe.

“This growth will help return the sector to a stable natural level following major restructuring of the industry in recent years.” 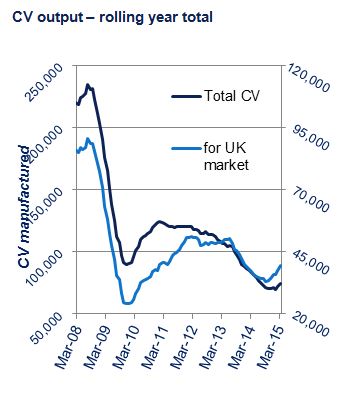 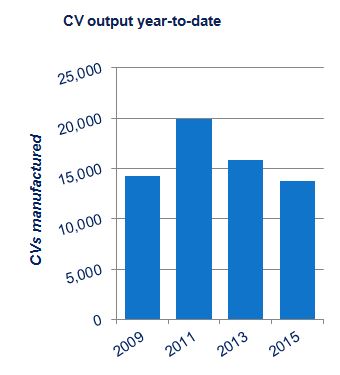