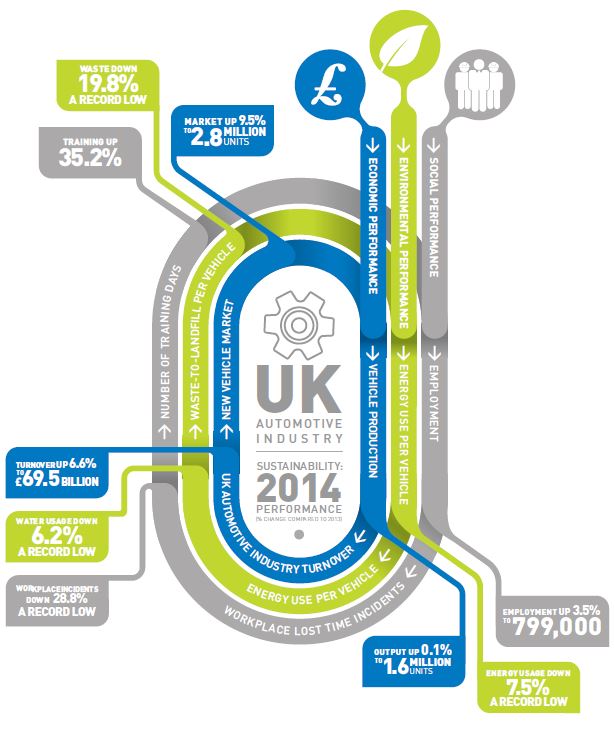 New figures released today by the Society of Motor Manufacturers and Traders (SMMT) confirm the growing strength and vitality of the UK automotive industry and its ascendancy as a major global player. SMMT’s 16th annual Sustainability Report confirms the sector is breaking new records, with turnover hitting an all time high of £69.5 billion in 2014. Manufacturing output, vehicle sales, jobs and export values also grew, while the environmental impact from vehicle production has been reduced dramatically.

The latest figures confirm an upward trend for new vehicle demand and manufacturing output, with almost 1.6 million vehicles built in 20141. Last year, car production alone grew to 1.53 million units – the highest level since 2007 – with an increasing number of vehicles built for the domestic new car market, which itself grew 9.3% to reach 2.48 million registrations last year. On current trends, UK car output is expected to reach an all-time record level of 1.95 million vehicles in the next two years2.

Meanwhile, investment in more efficient, high-tech manufacturing processes has led to huge gains in productivity. In each of the five years to 2014, an average of 11.5 vehicles were produced for every person employed in the industry, compared with 9.3 vehicles for the period from 2005 to 20093.

Despite greater production volumes, environmental impact has been significantly reduced. Total waste to landfill from all automotive production fell by more than a quarter (26.3%) in 2014, and an exceptional 92.3% since 2000. Meanwhile, water and energy use fell by 10.7% and 10.4% respectively, and CO2 emissions per vehicle produced fell by 5% compared with 2013. Industry has also made considerable improvement to its already outstanding safety record with the number of workplace incidents per 1,000 employees falling to an all-time low of 2.2 – down 83.9% on 2002, when data was first collected.

Mike Hawes, SMMT Chief Executive, said, “The UK automotive industry can be proud of its achievements as it continues to set new standards. The sector is delivering growth in volumes, turnover and employment, while reducing its environmental impact. Continuing to expand in a fiercely competitive global market is a major challenge and will depend on a supportive economic and regulatory environment which promotes investment to foster innovation and continuing productivity improvements.”

Large investments are still being committed to new and expanded production facilities in the UK, resulting in significant sector-wide recruitment, with an additional 27,000 jobs created in 2014 – a 3.5% increase on the previous year. The number of people employed in automotive (including manufacturing and retail) now stands at 799,000, with the average worker responsible for generating £440,000 in turnover for the sector. Investment in skills has also been crucial with employee training up by more than a third (35.2%) and some 500 new apprentices and trainees taken on by the sector last year.

International demand for British-made vehicles also continues to increase with total export value rising 1.8% to £34.6 billion – a staggering 103.8% uplift since 2000. It adds up to a considerable increase in the industry’s direct contribution to the British economy, rising 6.2% to £15.5 billion last year.

The figures are further evidence of UK automotive’s renaissance, as the sector continues to innovate and invest huge sums in research and development to meet ever-stricter targets on CO2 emissions and air quality, and capitalise on global megatrends such as connectivity and intelligent mobility.