British car manufacturing delivered a strong performance in June with volumes up 5.4% over the same month last year, according to new figures from the Society of Motor Manufacturers and Traders (SMMT). 143,759 cars were built in the month, with production for export (up 9.0%) outperforming that for the domestic market (down 7.1%) – a reversal of the trend seen in previous months.

June’s rise led the sector to its best half-year output since 2008: 793,642 cars rolled off UK production lines between January and June – up 0.3% on the same period last year, equating to more than three every minute.

The news comes amid further evidence that the sector is leading the way on productivity. New figures reveal that the sector achieved £100,000 in value added per employee in 2014 compared with £74,000 in 2010 – a 35% increase. The performance is particularly impressive when set against the £50,000 average per employee for the UK economy as a whole.

With production volumes up more than 50% since 2009 and significant investments still to be realised – a raft of brand new models are set to hit production lines in the coming months – the UK car industry is growing on a global scale. While the sector is enjoying robust demand in the domestic market, it is not immune to external influences. With economic and political instability in some global markets, it is essential the UK retains its competitive leadership, attracting investment to stimulate innovation, productivity and employment.

Mike Hawes, SMMT Chief Executive, said, “Today’s figures are testament to the ever-increasing demand for the diverse, high-quality range of cars we make in the UK. The sector is ahead of the game on productivity, with investment in efficient, high-tech manufacturing processes and a highly skilled workforce resulting in huge gains over the past decade.

“This success has been built on significant industry investment and has also relied on a positive relationship with government, essential if the industry is to maintain its international competitiveness.” 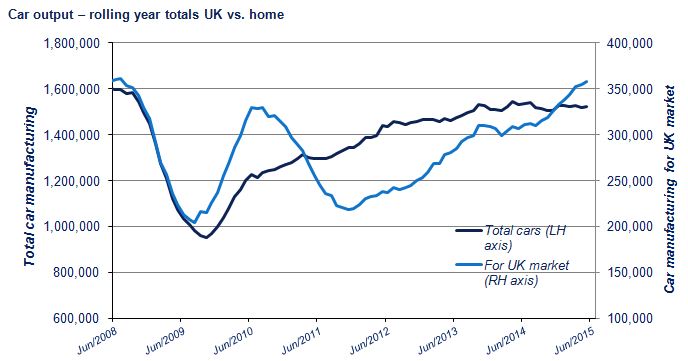 * Value added per direct automotive manufacturing employee in 2014: £100,000 vs. UK average (all sectors) of £50,000. Estimates based on official statistics from ONS Annual Business Inquiry and other sources.