Eight of the UK’s major car brands united at the Eiffel Tower in Paris on the eve of the key international motor show to demonstrate the diversity and quality of cars currently produced in the UK. Senior executives from British-based manufacturers, including Aston Martin, BMW MINI, Honda, Jaguar Land Rover, McLaren, Nissan, Toyota and Vauxhall, were joined by Mark Garnier MP, the British Parliamentary Under Secretary of State at the Department for International Trade, to promote the strength of the UK automotive sector to a global audience.

The UK automotive industry has undergone unprecedented growth in recent years – thanks to competitive business conditions, tariff-free trading and significant investment in new models and facilities. Car manufacturing achieved a 10-year high last year and British-built cars have never been so popular, with a record 1.2 million cars exported to more than 100 countries. Already in the first eight months of 2016, that total looks set to be beaten this year, with exports reaching almost 900,000 vehicles – 13% ahead of the same period in 2015.1

The UK’s biggest trading partner is the European Union and 57.3% of UK-produced cars have been exported to the rest of the EU so far this year, followed by 12.1% to the US and 7.1% to China. While the US topped the list of individual countries buying British cars, EU Member States took six of the top 10 places: Germany, Belgium, Italy, France, Portugal and Spain. 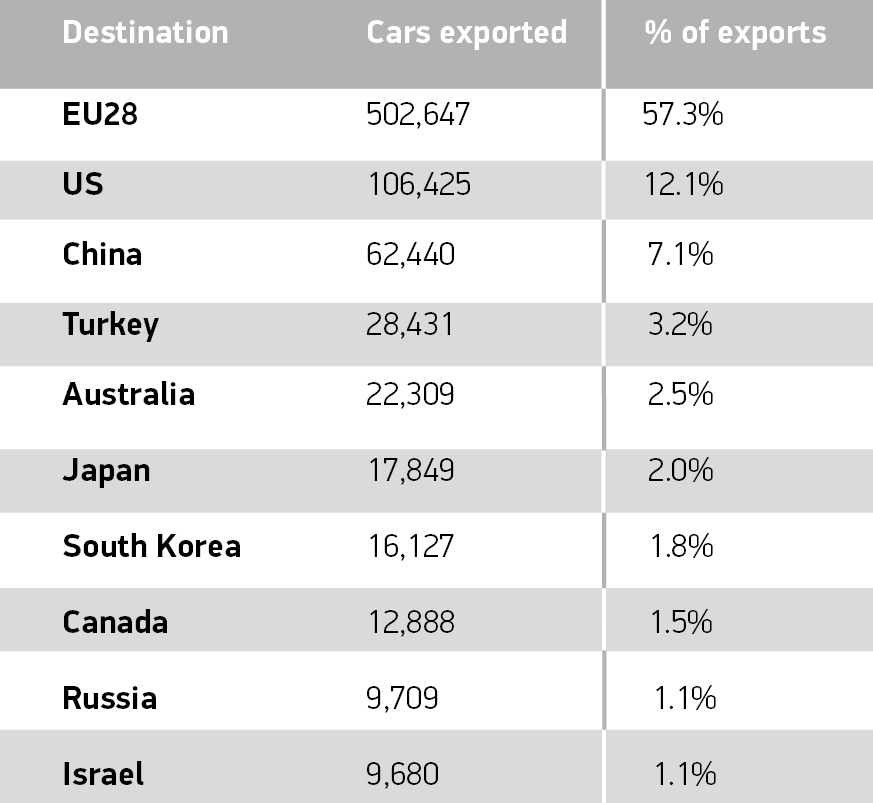 The UK automotive industry is respected globally for its rich heritage, iconic brands and engineering excellence. More than £10 billion of investment has gone into new facilities and models over the past five years and we’re proud to see so many rival brands coming together to promote the strengths of UK Automotive ahead of a key international motor show. The future success of this sector will hinge upon the ability of the UK to maintain the business and trading conditions that make the sector so competitive globally.

Huge sums are invested into the UK to develop, manufacture and bring to market vehicles that are cleaner, more fuel efficient, safer and more advanced every year. When it comes to ultra low emission vehicles and plug-in cars in particular, the UK has a strong record, with a £1 billion joint industry-government initiative to develop advanced propulsion technologies, while the UK ultra-low emission car market itself is the second fastest growing market in Europe after Spain.2

Meanwhile, the UK is already earning a reputation as global development hub for connected and autonomous vehicles, thanks to significant industry and government investment. The ability to trial these cars on public roads – as a result of the UK not having ratified the Vienna convention some decades ago – has given the UK a two-year head start on many other countries. This offers huge growth potential for the UK as the development and introduction of these technologies could result in an annual £51 billion contribution to GDP by 2030, along with 300,000 new jobs created and 25,000 accidents prevented every year.

That the UK has grasped this opportunity is testament to its ability to adapt, lead and innovate. Thanks to early investment, expertise and an inherent commitment to technological advancement, UK Automotive is well placed to be at the forefront of these breakthrough technologies to make driving smarter, safer and cleaner.

10 Facts about the UK car industry

2.     The UK exports around 80% of all the cars it produces – and exports are at record levels, with 1.2 million people across the world buying a British car in 2015.

3.     Some 2.5 million engines are produced every year in the UK, with more than half exported to global markets.

4.     The UK is home to 13 R&D centres and six design centres. In fact, innovation has been a major part of the sector’s growth – with £2.5 billion invested every year in R&D.

5.     In terms of car production output, the UK now ranks 3rd in the EU (behind Germany and Spain); and 10th in the world 3 – and the sector also has the highest level of workforce productivity in Europe.4

6.     If development of connected and autonomous vehicles continues at its current rate, the industry could be worth £51 billion to companies operating here by 2030.

7.     The UK has one of the EU’s fastest growing electric car markets – demand grew by more than 50% last year.

9.     The UK is home to 90% of the world’s top automotive suppliers, and a £6 billion untapped supply chain opportunity has been identified there.5

10.  The UK new car market is one of the most diverse in the world, and with 2.63 million vehicles registered in 2015, it is the second biggest in Europe behind Germany.6