Connected and autonomous vehicles (CAVs) will transform the lives of six out of every 10 people in the UK, according to new research published by the Society of Motor Manufacturers and Traders. Connected and Autonomous Vehicles: Revolutionising Mobility in Society,1 the first comprehensive UK-based study of the human impact of CAVs, canvassed the views of more than 3,600 respondents and found that this new technology will offer freedom to some of society’s most disadvantaged, including those with disabilities, older people and the young.

The research, conducted with Strategy&, PwC’s strategy consulting arm, shows CAVs have the potential to reduce social exclusion significantly. Six out of 10 (57%) people surveyed said this new technology would improve their quality of life. For young people, the impact could be even greater, with 71% of those aged 17 to 24 believing their lives would be improved. Consumers are increasingly seeing the benefits of CAVs, with 56% feeling positive about them. Young people were most excited, with almost half (49%) saying they would get into a CAV today if one were available.

Automatic braking and parking and the car’s ability to self-diagnose faults were cited as features most likely to reduce stress – the biggest attraction of owning a CAV among all groups. Freedom to travel spontaneously and socialise with friends and family were also seen as life-changing benefits, with 88% of people who believe CAVs will improve their social life saying a CAV would help them get out of the house more regularly. 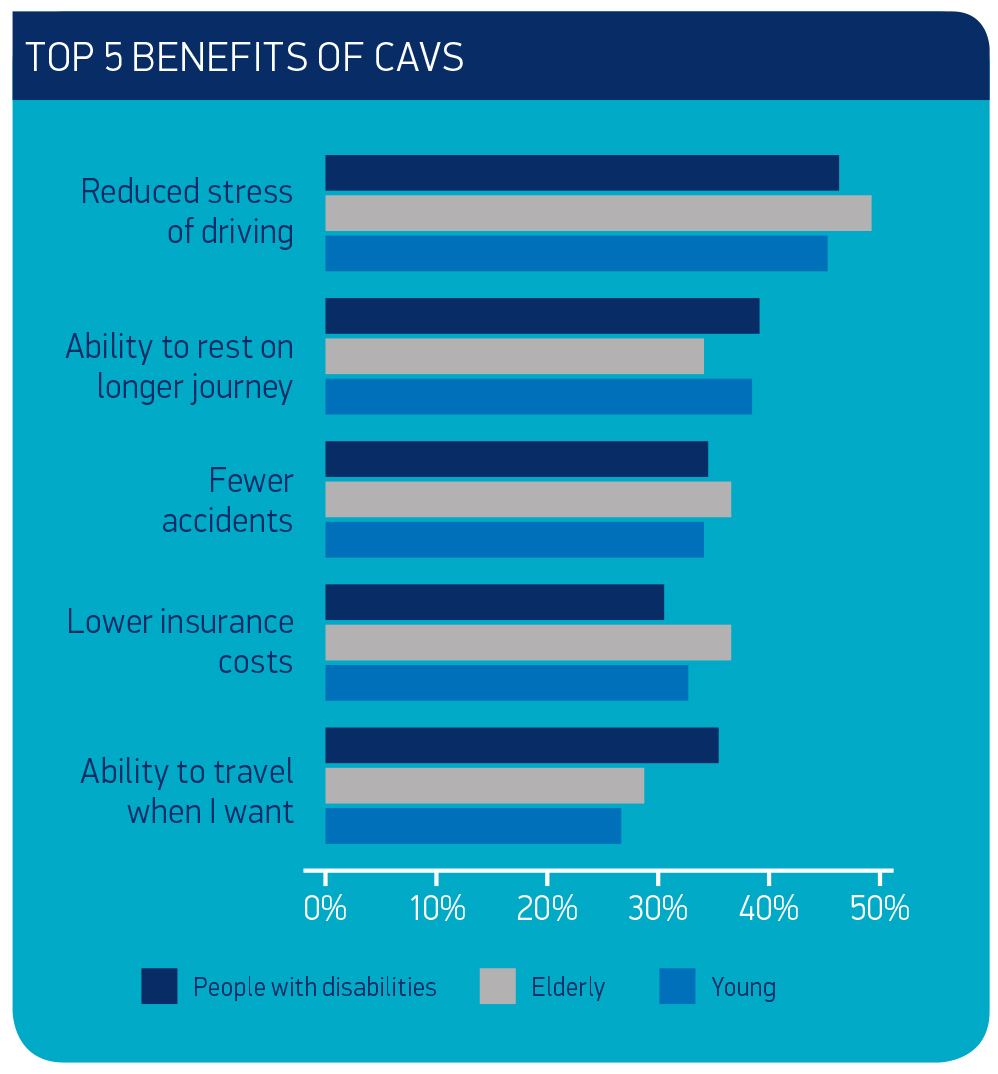 People with mobility-related disabilities are among those set to benefit the most, with almost half (49%) saying a CAV would allow them to pursue hobbies outside of home or go out to restaurants more often (46%). Meanwhile, two fifths (39%) said they would benefit from having better access to healthcare. Adults in this group are nearly three times as likely as the rest of the population to lack a formal qualification, and are less likely to be in paid employment.2 With car ownership lower in this group than the average population, CAVs offer the potential to access education and better paid jobs. In fact, Strategy& calculates that CAVs have the potential to give one million more people access to further education, enabling them to increase their earning potential by an estimated average of £8,509 per year. 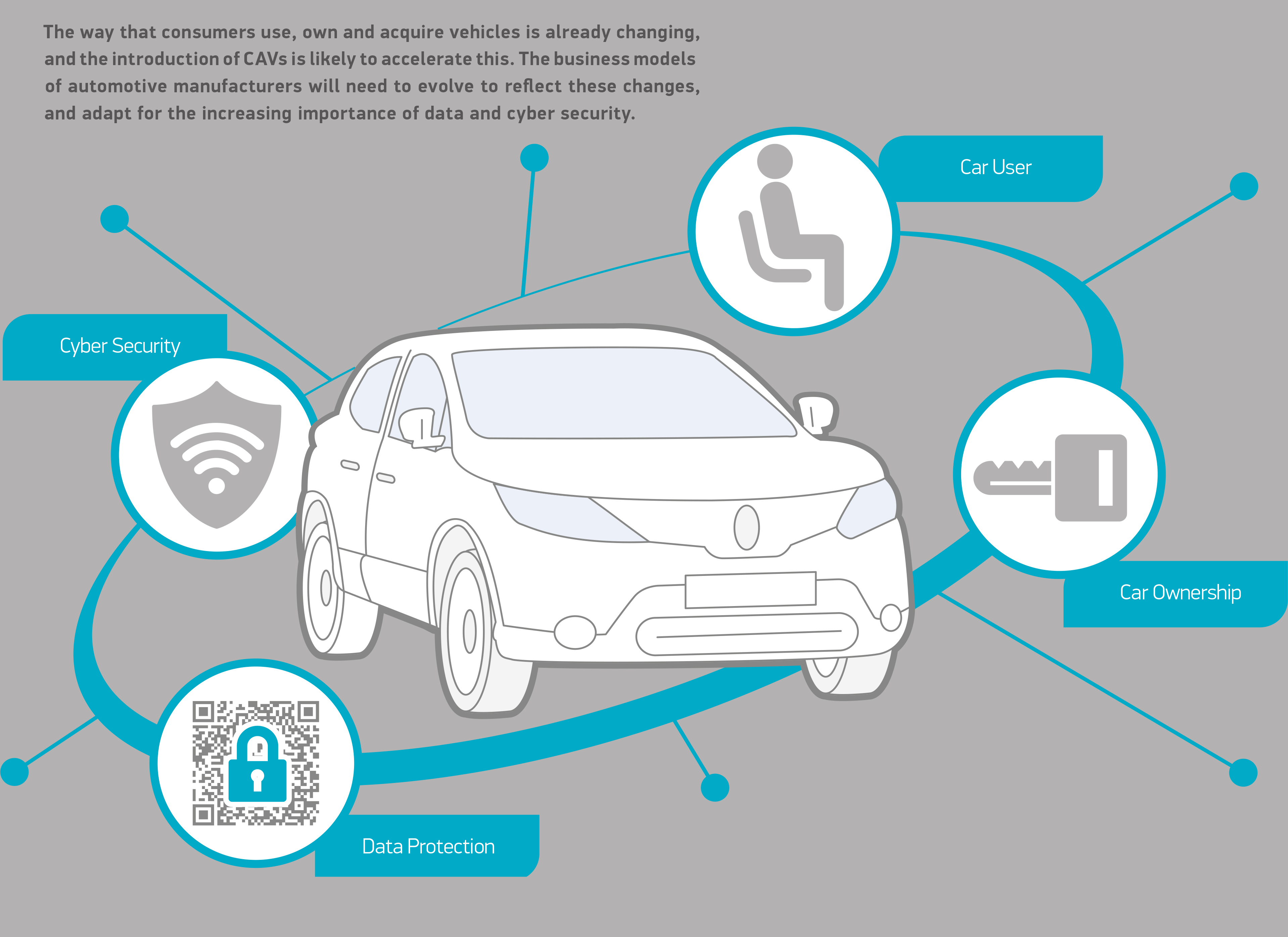 Older people are also set to benefit, with almost a third having problems walking or using a bus,3 and many unable to drive due to ill-health, poor eyesight or prohibitive insurance, making a strong case for self-driving cars. 47% of survey respondents said a CAV would make it easier for them to fulfil basic day-to-day tasks such as grocery shopping, while 45% looked forward to pursuing more cultural activities such as visiting museums or going to concerts or football matches.

Mobility is also a challenge for many young people with more than a quarter (29%) saying the cost of car ownership, particularly high insurance premiums, restricts their freedom. All groups cited the frequency of public transport as a barrier. More than two in five (43%) also cited the high cost and infrequency of public transport (33%) as a restriction. The potential for saving money, therefore, was highlighted as a key benefit of connected and autonomous vehicles.

The benefits of connected and autonomous vehicles are life-changing, offering more people greater independence, freedom to socialise, work and earn more, and access services more easily. While fully autonomous cars will be a step change for society, this report shows people are already seeing their benefits. The challenge now is to create the conditions that will allow this technology to thrive, given how it will deliver wider societal advantages.

There is a real risk that this momentum and competitor advantage in the UK will stall if we don’t do more to create positive public perception, overcoming our inherent risk averse culture. Expanding people’s horizons about the advantages of fully autonomous cars is a vital first step. This means better communicating the art of the possible to increase social acceptance and dispel concerns that our survey identified relating to cost and safety. Significant investment must also be made to improve the connectivity infrastructure across the UK road network and this report provides a number of clear recommendations to ensure that we capitalise on this window of opportunity.

Although fully connected and autonomous vehicles aren’t expected to become mainstream until 2030, most new cars are now connected via sat nav or Bluetooth, and more than half are available with safety systems such as collision warning or autonomous emergency braking. The UK is also fast establishing itself as a centre of excellence for this exciting new technology, with billions of pounds of investment already delivering public trials of autonomous driving and testing of prototype vehicles by car makers on UK roads. 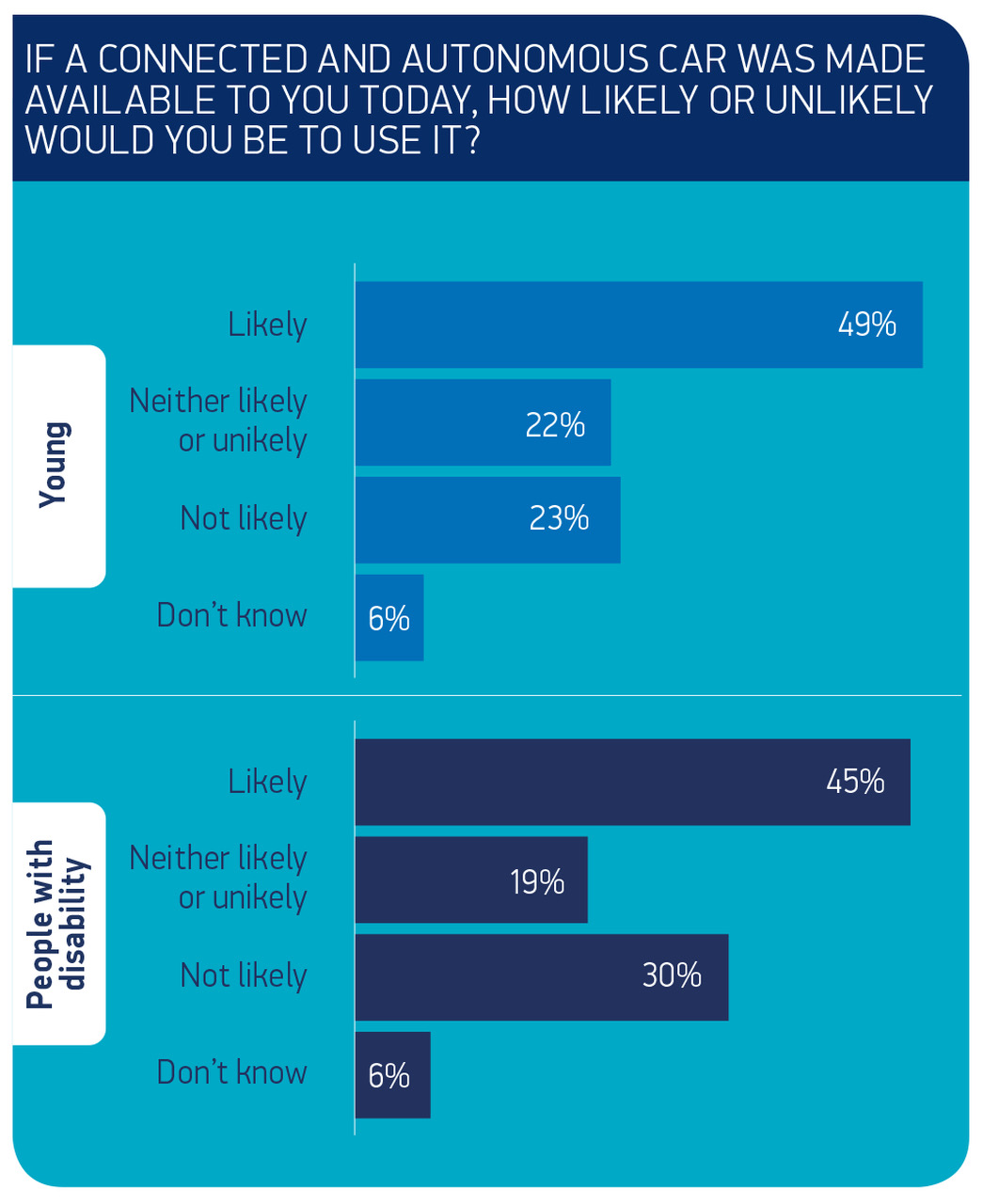 SMMT has already identified a £51 billion economic opportunity to the UK, as well as the potential to prevent some 25,000 road accidents and save 2,500 lives.4 This new research suggests that the potential of CAVs to get more people into education, work, and enabling them to more freely access healthcare, amenities and leisure activities, could deliver a further economic boost.

1 Connected and Autonomous Vehicles: Revolutionising Mobility in Society, March 2017, Strategy&, includes findings from a survey of 3,641 UK consumers aged between 17 and 65+ conducted between 2 and 17 March 2017. The sample included 1,000+ respondents in each of the demographics: people aged 17-24, people aged 65+, and adults aged 17 and above with disabilities.