Feature: What does the delivery van of the future look like?

The popularity of online shopping has fuelled rapid growth in the parcel delivery market – up to 10% a year in mature markets like the UK, but up to 300% annually in developing markets like India, according to figures in a 2016 report from the consultancy, McKinsey.

Last-mile delivery fleets have expanded to meet demand, but new technologies will be required in the future to increase delivery efficiency, if the sector is to keep up with continued growth without an exponential rise in the number of vans on the road.

McKinsey’s report predicts that in the long term, autonomous ground vehicles (AGVs) and lockers will largely replace the current final-mile delivery model, supplemented by drone delivery in rural areas, but in the immediate future van manufacturers are working on ways to take things forward, on the ground.

Mercedes-Benz Vans developed the Vision Van as a demonstrator for how the future of last-mile delivery could look. It has countless futuristic features, some closer to production than others, including electric drive, roof-mounted drones, joystick control and a fully automated cargo space that’s loaded in the depot as a single piece, racks and all, and serviced on the move by an onboard robot. 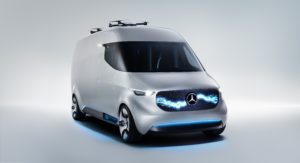 “The concept tries to provide answers to problems that will arise in the near future, in a segment that is growing dramatically,” says Thomas Moser, manager of prototypes and show cars at Mercedes-Benz vans. “Vision Van is a base for further discussions with potential customers; we want to pick out some of the features and through customer co-creation, trials and proofs of concept, bring them to the road.”

Logistics companies are already looking for sustainable solutions. Delivery company UPS has embraced alternative fuels for its fleet and at the 2017 Advanced Clean Transportation Expo in California earlier this month it unveiled the world’s first hydrogen-electric delivery truck. Hand-built, the vehicle features a fuel-cell, a lithium-ion battery pack, hydrogen tanks and an off-the-shelf motor. The plan is to deploy a fleet of these vehicles next year.

For Mercedes, though, customers of its battery-electric production vehicle will be able to select from multiple battery sizes to balance the needs of payload and range. Additional mass from batteries and a cargo-space automation system might be more of a problem for Tesco than for Amazon, for example, for whom the load-limiting factor is more likely to be volume than weight.

The automated loading system and robotised cargo space are seen as major ways to improve efficiency. Moser believes that by inserting the shelves into the van fully loaded, downtime in the depot could be reduced from as much as an hour and a half to as little as five minutes. “We have worked on the loading system and have Vito vans on customer trials with one-shot loading,” he adds. “We’ve also increased the size of the engineering team that’s working on cargo space automation.”

Vision Van’s onboard robotic system removes the need for the driver to go into the cargo space. When the van stops at the next destination, a hatch opens and the driver can collect the parcel to make the manual delivery. 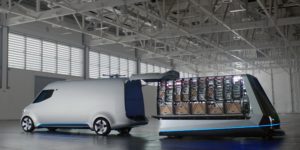 “We are in discussions with a lot of logistics providers and ecommerce companies,” says Moser. “They’re working on the same problems within their own organisations, such as automating the cargo space, and reducing the time spent searching in it and rearranging it. In particular, walking around the vehicle and climbing into the cargo space to look for a parcel, is a pain point. We believe that with an automated cargo space the [delivery] process time can be reduced.”

Joystick control won’t make production anytime soon, but the Vision Van’s drones – which are loaded by the same cargo-area robot that retrieves parcels for hand delivery – could yet be a part of the final-mile landscape, if regulatory approval for their commercial use can be secured. Mercedes’ partner for the drones, Matternet, already has them on trial with the Swiss Post and was recently granted permission to use them to fly lab samples autonomously between two hospitals in Lugano.

Back on the ground, Moser highlights better route-planning software as another area for development (although not by Mercedes) if more efficient final-mile deliveries are to be achieved in the future.

“We’ve looked around but there’s nothing really available that plans a delivery route with multiple stops,” he says. “You have to create a data string that provides the system with all the information it needs to put the right parcel on the right tray on the right shelf, which is put into the right van for the right district. For that you need a system that’s fully connected to the warehousing system as well, and linked to the routing software. Most likely the routing will happen on a backend server, not locally in the van, because you have to control the entire fleet – it’s not like a passenger car, where the navigation system is onboard to calculate the route.”

To lend weight to his case, Moser cites delivery figures from research his team did with a German delivery company. They suggest a dramatic drop in delivery percentage – from above 90%, to 30% – from a driver who knows the district and many of the regular delivery spots well, to one who’s new to the area.

Moser reports that despite its rapidly advancing driverless technology for passenger cars and heavy trucks, Mercedes isn’t currently working on autonomous delivery vans, but he does envisage several ways in which driverless systems could play a role: a ‘follow-me’ mode, whereby the van would follow the driver down the street as deliveries are made; a van travelling autonomously from the depot to the delivery district, where the driver would join the vehicle; and a van moving autonomously around the depot, say from the charging station, to the car wash and on to the loading bay.

As always however, the success of these or any other new technologies will depend on them delivering a rapid return on investment for the operator. “Commercial vehicles must earn money,” Moser stresses. “This is a cost-driven market, very different to passenger cars.”