The UK’s used car market declined for a second consecutive quarter in Q3, according to figures released today by the Society of Motor Manufacturers and Traders (SMMT) but overall 2017 remains level. 2,102,078 second hand cars changed hands from July to September, representing a fall of -2.1%.

Year-to-date, the market remained at record levels after a bumper first quarter, with more than 6.3 million buyers opting for a used car in the first nine months of 2017 – a 0.1% increase.

In the latest quarter, superminis extended their reign as the most popular vehicle segment, taking a third of the market (33.6%). However, SUVs and minis were the only segments to show growth – up 11.2% and 1.3% respectively, reflecting new car market trends.

Meanwhile, silver continued to be Britain’s number one used car colour, closely followed by black, which – following new car buying patterns – grew its appeal by 0.8%. Blue, grey and white made up the rest of the top five used car colours.

The used car sector remains in good health as motorists take advantage of some great deals on cars – including some of the latest low emission diesel and alternatively fuelled vehicles. However, as demand in the new car market cools, used car sales normally follow suit unless there are significant tax changes affecting the new car market. Fleet renewal is the fastest way to improve air quality, however, so we need economic and political certainty to boost buyer confidence and keep both markets moving. 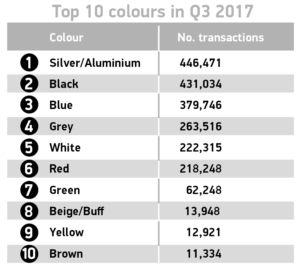 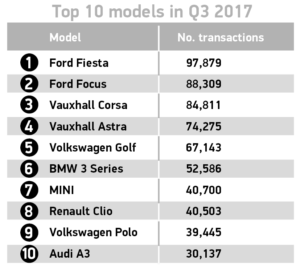 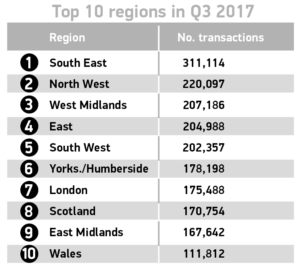