Female car ownership is now at record levels, hitting 11.8 million in 2017, according to new Motorparc data released today by the Society of Motor Manufacturers and Traders (SMMT). The UK’s biggest automotive analysis shows the changing face of Britain’s cars – and their keepers.

Latest analysis shows the number of cars registered to women has surged by more than a fifth (21%) since 2007, with women now owning more than a third (11.8m) of the UK’s cars. This compares with a 10% increase in the number of men purchasing one in the same period. 17.8m cars were registered to men in 2017 and there are now 34.7 million cars on UK roads, up 12% across the past 10 years. 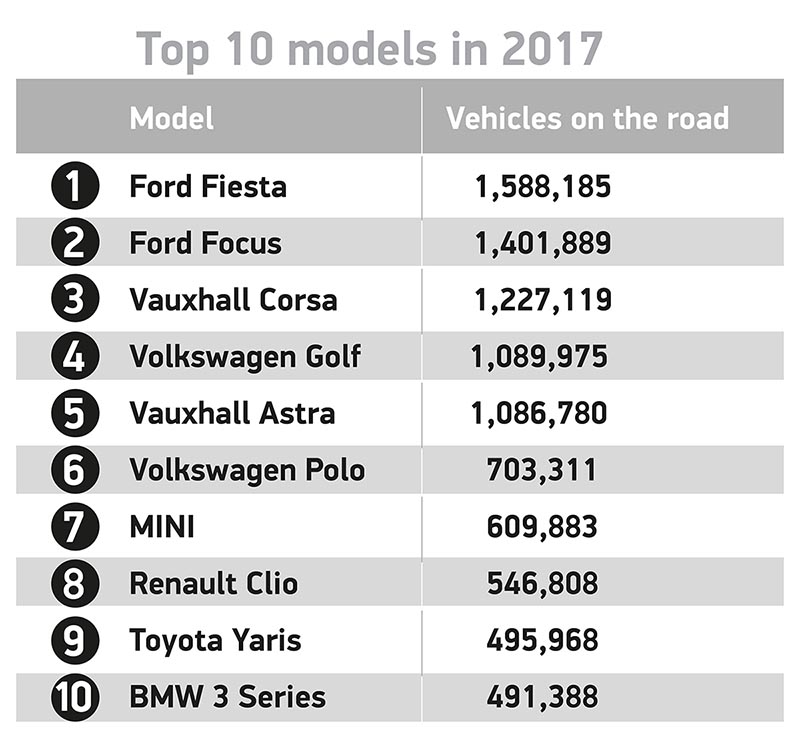 Meanwhile, drivers are benefitting from more technology than ever before. Although manual gearboxes still dominate, the number of automatic models has risen 70.5% since 2007, with some 8.4 million now on the road. 40.0% of all new cars registered in 2017 featured an automatic gearbox, double the proportion in 2007, with consumers attracted to the comfort and driving simplicity inherent in the technology.1

The data also shows the diversity of British car ownership, with some 1,500 model ranges and 65,000 different model specifications in the parc, compared with 1,200 and 56,000 10 years ago. More than a fifth (22.5%) of cars on UK roads were less than three years old in 2017, helping improve air quality and CO2 emissions with the latest low emission technology. 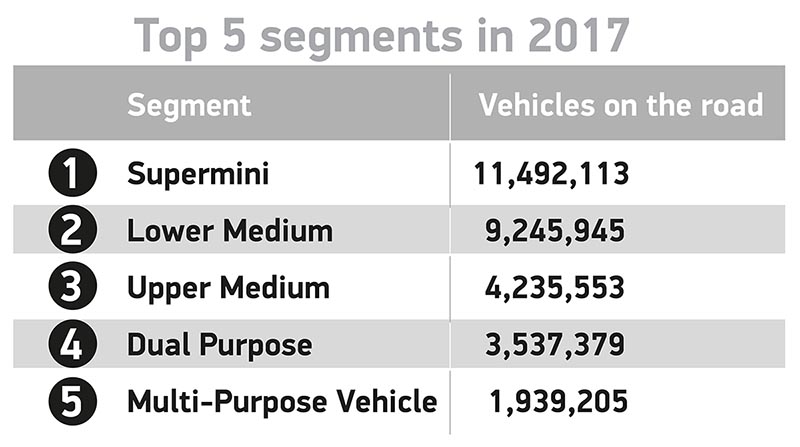 Elsewhere, smaller models continue to make up the bulk of the UK’s car parc – mini, supermini and lower medium together taking 62.3% market share in 2017, up from 60% in 2007. Across all car segments, however, the most dramatic shift has been in the rise of dual-purpose cars. Their number has increased more than 90% during the past decade with some 3.5 million on the road in 2017, representing 10.2% market share, up from 6.1% in 2007. Conversely, upper medium models have seen the largest fall in popularity, declining -27.0% – equivalent to roughly 1.5 million cars. 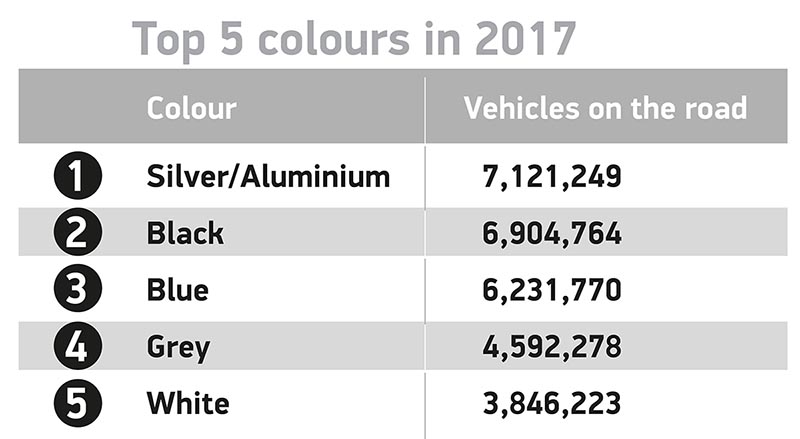 The data also shows consumers’ changing car colour preferences, with the trend to monochrome seeing brighter colours fall out of favour. In 2017, silver/aluminium was the most commonly seen car colour on the road, followed by black and blue. Data from 2007 reveals that blue was then the top choice, followed by silver/aluminium and, in third place, red – a colour that has now fallen out of the top five completely, along with green, which was previously the fifth most popular shade.

Consumers are enjoying greater freedom and mobility than ever before, which along with greater reliability and improved fuel efficiency, make owning a car a more attractive and affordable option for millions of people. With every new model launched, more motorists are benefitting from more advanced technology. From innovative safety systems such as autonomous emergency braking and adaptive speed control, to state-of-the-art infotainment and comfort features, including heads-up navigation, heated seats and air-con, in-car WiFi and greater connectivity. This latest Motorparc analysis shows the shifts in consumer preferences and behaviour over the past decade and provides insight for car makers and dealers to help them adapt to changing consumer behaviour in the future.

The SMMT Motorparc database enables the analysis of records for almost 40 million cars and commercial vehicles currently on the road, broken down by make, model, region, town and postcode. With over 23 years of historical data, it is one of the richest automotive data sources anywhere in the world. More information about SMMT’s Motorparc and new vehicle registrations data services can be found at www.smmt.co.uk/data.